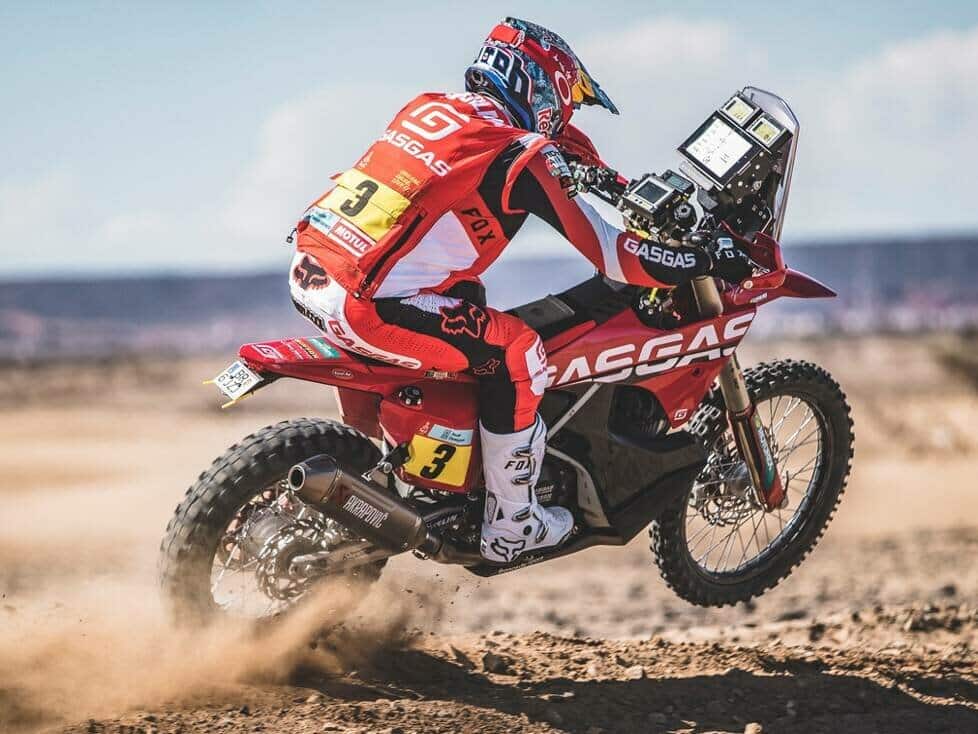 Before the final motorbike stage, the top three are within seven minutes of each other – Sunderland, Walkner, Quintanilla and outsider van Beveren say so

The Dakar Rally in Saudi Arabia remains exciting in the motorbikes until the twelfth and final stage. Three riders still have a realistic chance of winning. Sam Sunderland (GasGas) regained the overall lead in stage eleven. The Briton has a 6:52 minute lead over Pablo Quintanilla (Honda) and 7:15 over Matthias Walkner (KTM) before the decisive day.

Defending champion Kevin Benavides had pulled out of the leading pack on Wednesday. There was a technical problem with his KTM. The Argentinean had to retire, but was allowed to continue the race with penalty hours on Thursday after the repair.

The five-way fight became a four-way fight and finally a three-way fight for the victory, because Adrien van Beveren lost a lot of time in the eleventh stage. The Yamaha rider lost the overall lead and dropped back to fourth place. His gap now stands at 15 minutes ahead of the final day.

“Already at kilometre four I was looking for a waypoint that didn’t trigger,” van Beveren reported. Being one of the early starters, he had the disadvantage of having to navigate in the desert. “I lost a lot of time there, my nerves were tense. “

“But I stepped on the gas and risked 200 per cent. Then I almost ran out of fuel,” the Frenchman described. In the end, his time loss added up to 21 minutes. “That weighs heavily, but I gave everything. The other guys in front didn’t help me.”

That’s because as a Yamaha rider, van Beveren was more or less on his own, while the Honda guys and the KTM, Husqvarna and GasGas riders were able to work together. Walkner had a starting position outside the top 20 on Thursday and took advantage.

“Today was a cool day, very fast and physically for sure the most exhausting stage,” Walkner reported on his Red Bull blog. “I got into it well, the first 70 kilometres were really, really good. “

“Unfortunately I got lost once or twice because I had a lot of dust from the riders in front of me. It was often really hard to stick to the roadbook and find the right canyon. I gave everything again today. “

“After the fuel stop I tried to attack fully. But the last 30 kilometres I had to dose a bit because I lost power on the bike,” Walkner worries. “We have to look at that now. I didn’t want to risk anything more.”

“I guess I lost another one and a half to two minutes because of that. But I gave it my all, that’s all I can do. I was at what felt like 99.9 per cent all day. Luckily it didn’t throw me. I’m happy that I’m at the finish now and tomorrow I’ll continue. “

Does Quintanilla take third Honda win in a row?

Will Quintanilla and Walkner be able to catch Sunderland on Friday? Between the two of them there is also a direct duel for second place. Or can Quintanilla continue Honda’s winning streak in Saudi Arabia? It would be Honda’s third overall win in a row.

“I think it was the hardest day of the Dakar,” said the Chilean after stage eleven. “At a waypoint I made a small mistake, losing two or three minutes. It was a tough race. I attacked and I’m happy with my performance.”

“Since the rest day I have made up time every day. I thank everyone in the team because we worked very hard. I am happy. Now there is one more stage over 160 kilometres. We have to stay focused because the race is not over yet. “

The big favourite for the overall win is Sunderland. The final stage towards the finish in Jeddah covers a special of just 160 kilometres. If the Briton makes no mistakes and there is no technical problem, then Sunderland could celebrate his second Dakar victory after 2017.

Sunderland already held the overall lead after the second, third, fourth, fifth and sixth stages. On race day seven he dropped back to second place, but regained the lead immediately in stage eight. In stages nine and ten, he had to relinquish the top spot again.

In the important eleventh stage, Sunderland perhaps already captured the match ball. “The race is not over until you see the chequered flag after the last stage,” he kept his cool. “The navigation is very difficult. I have to stay focused and do my best.”

“That’s all I can do. All the other drivers are also doing their best. It’s been a very difficult race so far because the times are so close every day. I’ll try to do a clean stage tomorrow. Hopefully we can get it done.”

“Yesterday a lot of people were tactical to have a better starting position for today. Then today everyone attacked. I did the same and now I’m standing here. Tomorrow I will try to do my best. I just try to keep doing the same thing until the job is done.”