HomeMotorsportsThis is how McLaren explains its pit chaos in Montreal
Motorsports

This is how McLaren explains its pit chaos in Montreal 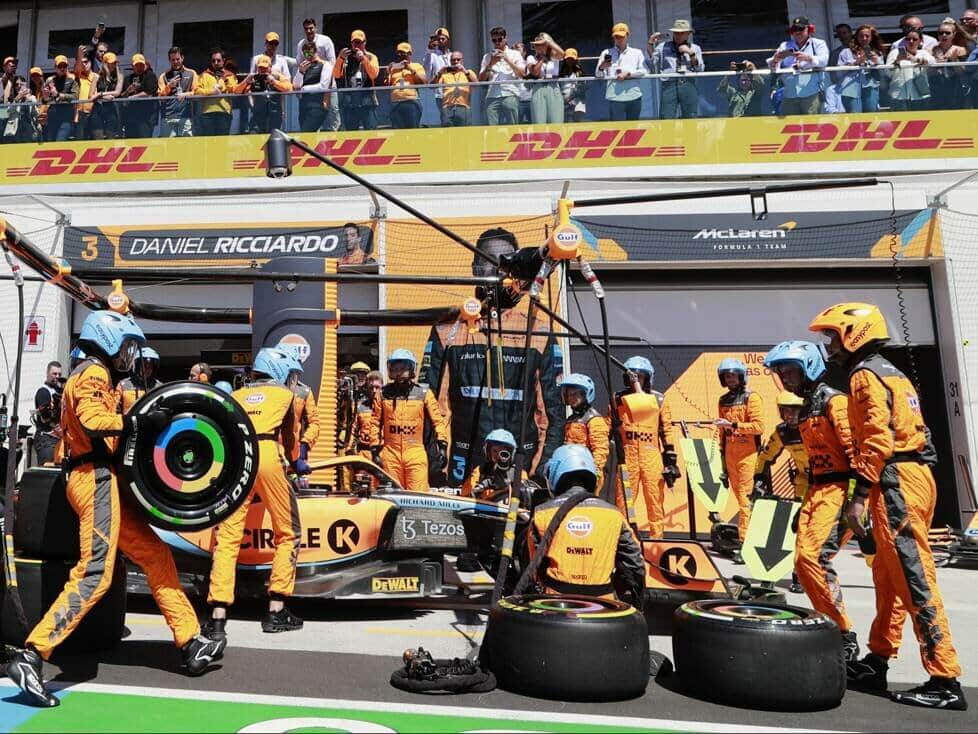 Lando Norris still radios that he is in the pit lane. His engineer confirms receipt of the message. Shortly afterwards, Norris is standing on the parking space in front of the McLaren pit – and nothing works: the wrong tyre is fitted to the front left, and none at all to the right. Almost 20 seconds pass before the chaos is cleared up and Norris can drive off with a fresh set of hard.

How did this happen? McLaren team boss Andreas Seidl is visibly uncomfortable with this question after the 2022 Canadian Grand Prix in Montreal. He is therefore brief and speaks of a “communication problem” that led to the breakdown at the double stop of Daniel Ricciardo and Norris.

“I don’t want to go into too much detail because we have to deal with it internally. We have to look at it and do it better next time,” Seidl said.

The team was forewarned that Norris was coming

Ricciardo, who McLaren had dispatched first, recognised “a bit of confusion” even in the rear-view mirror and blames it on a “late decision” to pit. That’s probably why “something went wrong” with the tyre change, he speculates.

But in fact the McLaren crew had plenty of warning: Norris had been on the back straight coming out of the hairpin when the virtual safety car phase was issued on lap 19. And he immediately asked the team: “What do we do?” The answer came promptly: “Come to the pits. “

On arrival, Norris had to wait briefly until Ricciardo had set off, then he took over the stand in front of the pits. And suddenly things got hectic, the mechanics gesticulating wildly because the tyres weren’t ready for Norris.

How did Norris experience the scene and can he explain it? The McLaren driver waves it off: “You probably know more than me. I only saw what you saw. We had different tyres, then no tyres. So I have no idea.”

Norris seems generally served. Not only did he lose almost 20 seconds at the pit stop, but he doesn’t make a stab at all in the race. “Everything just went wrong. There were hardly any positives,” he says. And then he delivers a scathing verdict: “The car is not good enough. “

He and Ricciardo were “probably the slowest” with the MCL36 in Montreal. “Then you just can’t overtake and you don’t do anything. But a day like this is good because it shows that there is still a lot missing. Because we never really see the true pace, but are sometimes lucky to be there. But this way you can see where we really are.”

McLaren form is not dependent on the particular circuit, Norris continues. As to whether this has dashed all hopes for the rest of the season, he simply says: “Yes.”

Norris: “I just want to have a cool bath now, get an ice cream and then go home. “

Ricciardo also without a chance in the race

Ricciardo also doesn’t think much more of Canada: “If you like, it probably wasn’t a squeaky clean race. It was one of those races where I felt like I was just hanging in there. There were a couple of DRS moves and drove along there, but I wouldn’t say we had any strengths. We didn’t manage to put ourselves in contention. “

“I did overtake a couple of times going into the final chicane, but I think that was against two cars on older tyres. We were just slow and so out of the decision,” explained the McLaren driver.

But that’s not all: Both Norris and Ricciardo had to save the material in the final phase. Team boss Seidl explicitly refers to the brakes. That is why Ricciardo was not able to attack at the end. Result: eleventh place, 4.8 seconds behind the points. Norris was nine seconds behind in 15th position.

For Seidl it was therefore “a disappointing weekend for many reasons”. The faulty “procedures in the race” were one thing, the lack of “pace of the car” another. “Overall,” says Ricciardo, “we had difficulties”.

Only the bouncing was not as dramatic in Canada as it had been recently in Azerbaijan: “After Baku we had found out that something had broken, which is why my bouncing had been so bad,” says Ricciardo. “In Canada it was better. There are big bumps before turn 8 that bug you a bit towards the end of the race, but nothing else crazy. “