The tragic fall of a WWE legend 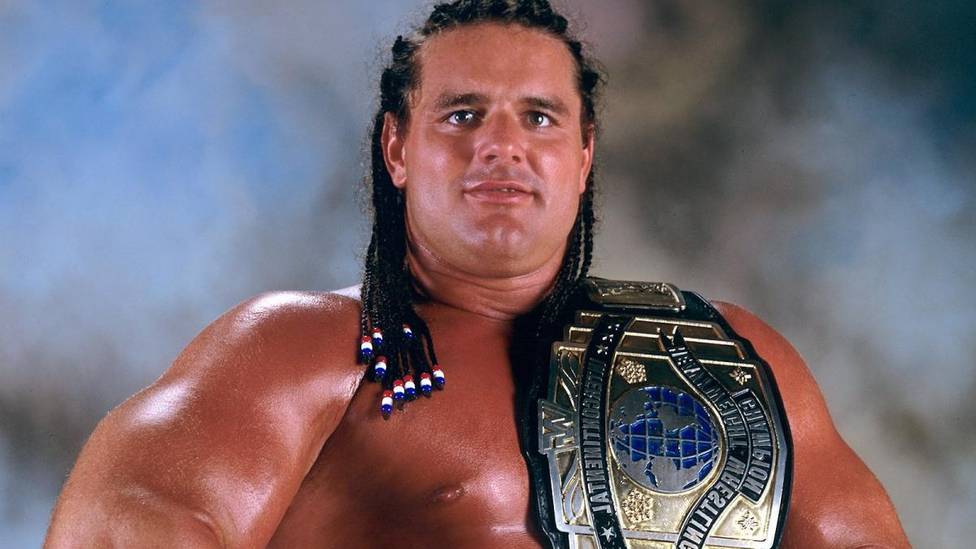 As British Bulldog was a face of the German WWE boom in the nineties. However, Davey Boy Smith, who died at an early age, paid a high price for his fame.

Gold, of course, went to Hulk Hogan. Silver to Bret “The Hitman” Hart. But then he came along.

David “Davey Boy” Smith, better known as “The British Bulldog” was at the peak of his career when the WWE boom spilled over from the USA to Germany in 1992.

Glittering Great Britain flags, pigtails with pearls also in the national colours and the classic “Rule Britannia” as a theme were the trademarks of the permanently smiling 118-kilo man, who was one of the biggest stars of the WWF at the time – and in his home country is still probably the most popular wrestler ever.

His popularity in Germany at the time was proven by his winning the bronze Bravo Otto, the audience award of the biggest German youth magazine, which at the time was also briefly given to show fighters.

Above all, Smith’s outstanding match against brother-in-law Bret Hart at SummerSlam 1992 in front of almost 80,000 fans at London’s Wembley Stadium is a legend – less well known, however, are the many dark shadows that lay on the career of Bulldog, who died 20 years ago today at the age of only 39.

WWE fired the British Bulldog shortly after his biggest match

The Bravo Otto year 1992 was already overshadowed by scandal: three months after his biggest match at SummerSlam, he was shown the door by the WWF: his colleague The Ultimate Warrior, who was also fired and died in 2014, had acquired growth hormones in England, Smith had – as he himself admitted – made the contact.

The WWF was at the centre of a major steroid scandal at the time; the year before, urologist George Zahorian had been convicted of selling the illegal substances to Hogan and other wrestlers. League boss Vince McMahon (himself acquitted in 1994 of promoting steroid use by his stars) cracked down on Smith and the Warrior under mounting public pressure.

Smith’s demise (cause of death: heart attack) was also linked to steroid abuse in the official autopsy report. Smith was slight at the beginning of his career, but then a mountain of muscle until his death. Shocked at Smith’s untimely death, only those who were not close to him were said to have been at the time. He had addiction problems that were said to have worsened in the last years of his life.

“He had tremendous back pain, since the eighties,” Brett’s brother Ross Hart told the Wrestling Observer at the time, “He was in agony, in and out of back specialists. He lived in pain for a long time and couldn’t get off painkillers.”

Smith paid a heavy price for his desire for fame in a business that used to be an even more ludicrous ordeal than it is today.

Before Smith became world famous as a singles wrestler in the WWF, he was a young star in his homeland, Japan and Canada. Smith – who shone with an amazing blend of power and technique – competed there for the STAMPEDE promotion, the Hart family league led by legendary patriarch Stu Hart. Smith married into the family when he married Brett’s sister Diana in 1984.

Together with his cousin Tom Billington aka Dynamite Kid, Smith formed perhaps the best wrestling duo of his time. As the “British Bulldogs”, they also shaped a golden era of tag team wrestling in the WWF before leaving the league in a dispute in 1988.

The partnership then ended in a toxic rift in 1990 when Smith returned to the WWF against Billington’s wishes. The Dynamite Kid, who ended up in a wheelchair after his career and passed away at the end of 2018, caused a stir in 1999 with an extensive drug confession in his autobiography “Pure Dynamite” – in which he scathingly portrayed ex-partner Smith.

Although critics feel Smith’s best days in the ring were already over after the Bulldogs split – the wrestlers’ heavier touring schedule at the time had already caused noticeable depletion: it wasn’t until he was a singles wrestler with the WWF that he had his absolute breakthrough.

Smith’s popularity in Europe was worth its weight in gold for the WWF, which increasingly set its sights on the international markets after the Hogan boom in the USA had waned. Because of Smith, SummerSlam 1992 was moved from Washington to London, his winning main match against Intercontinental Champion Bret Hart caused a spectator and merchandise record. Incidentally, Hart later reported that Smith had been “drugged up” during the match.

After his release, Smith found work in the rival league WCW, and after his WWF comeback in 1994, he was still a popular sidekick to the big stars, as a title challenger to Bret Hart, Kevin “Diesel” Nash and Shawn Michaels, as a partner to Lex Luger and Owen Hart and as a member of the legendary and ill-fated Hart Foundation.


Highlight not only from a German perspective: his technically brilliant match against Owen Hart at a RAW edition recorded in Berlin in 1996, in which the Bulldog won the de facto European Title established for him.

The Bulldog’s star sank in 1997 when he left the WWF together with brother-in-law Bret out of anger over the infamous “Montreal Screwjob” and went back to WCW: There – as well as on his WWF return in 1999 – he was a mere shadow of his former self.

Addiction, strife and strokes of fate

Bodily problems and addiction spiralled out of control, including accidentally landing on his back on a hidden trapdoor in the ring in a 1998 match, through which the Ultimate Warrior would later climb for a surprise appearance.

Private difficulties added to this: he lost his mother and his cancer-stricken sister within a short period of time, his marriage fell apart, most recently he was together with the wife of his brother-in-law Bruce Hart – which further deepened the rifts in the Hart family, which had been badly divided above all by Owen Hart’s accidental death in 1999.

Until the very end, he was nevertheless sure that he would manage a successful comeback. “My body is at one hundred per cent, it’s just a matter of time, I think,” he said in his last interview, conducted by telephone during a holiday trip to Invermere, Canada.

A few hours later, on 18 May 2002, Smith’s heart stopped beating. His estranged survivors held two separate funerals (brother-in-law Bret was at both).

Shortly before Smith died, he was in the ring in a couple of independent matches with son Harry, who didn’t let his father’s fate stop him from pursuing a career in the wrestling business himself.

“My father made mistakes. I learned from them,” he explained in various interviews in which he described his 2020 WWE Hall of Fame inductee father as a loving and humorous mentor despite everything.

Between 2006 and 2011 Harry was active in WWE as DH (David Hart) Smith, but did not reach his father’s popularity there, even a planned comeback in 2021 ended with an early dismissal.

The 1985-born offspring was more successful as Davey Boy Smith Jr. in Japan, and in 2015 he also bought the rights to the “British Bulldog” moniker, with which he has competed ever since.

As flawed a man as Davey Boy Smith was – the myth of the Bulldog he embodied is larger than life in the wrestling world.