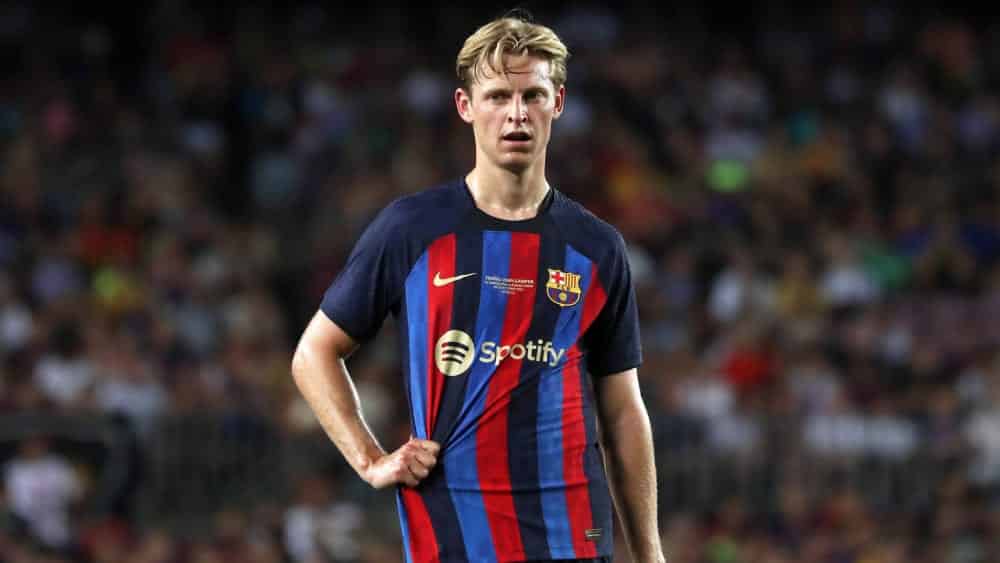 According to a report, FC Barcelona want to persuade Frenkie de Jong to terminate his current contract – and have reportedly been applying pressure via email.

“We want him to stay and he wants to stay,” club president Joan Laporta told “Mundo Deportivo” on Monday about Frenkie de Jong, but that is apparently not even half the truth. A report by “The Athletic” now reveals more details about the seemingly endless transfer hiccups surrounding the Dutchman – and about the machinations at FC Barcelona.

According to this, Barça has been trying for weeks to get de Jong to terminate his existing contract and return to his old one. In an email dated 15 July, the player was allegedly informed that the conditions granted to him by the board of directors led by ex-president Josep Bartomeu when his contract was renewed in October 2020 were criminal and gave cause for legal action to be taken against all parties involved.

Should de Jong be blackmailed?

According to “The Athletic”, the midfielder extended his contract prematurely by two years until 2026, whereby parts of his salary for the 2020/21 and 2021/22 seasons – probably due to Barça’s currently decreasing annual salary cap – were initially withheld and then redistributed over the remaining four seasons. This is said to amount to a total of 18 million euros.


The ex-board member denies wrongdoing, according to the report; however, the current one is said to have warned de Jong and his advisors in further talks that they themselves might be involved in the alleged criminal acts.

The suspicion is that de Jong is being blackmailed in order to increase the club’s severely limited financial leeway, which still does not know whether it will be able to register all its new arrivals with La Liga before Saturday’s La Liga kick-off against Rayo Vallecano.

Chelsea may be considering a bid

According to media reports, a move for de Jong to Manchester United had previously fallen through due to the 25-year-old’s veto. The clubs are said to have already agreed on a transfer fee. In the meantime, there is a consensus in England that Chelsea FC – who, unlike Man United, will be in the Champions League in 2022/23 – are keeping a close eye on de Jong’s situation and may be preparing an offer.

“The Athletic is already calling the de Jong case “one of the most extraordinary stories football has ever seen”. And an end is far from in sight.