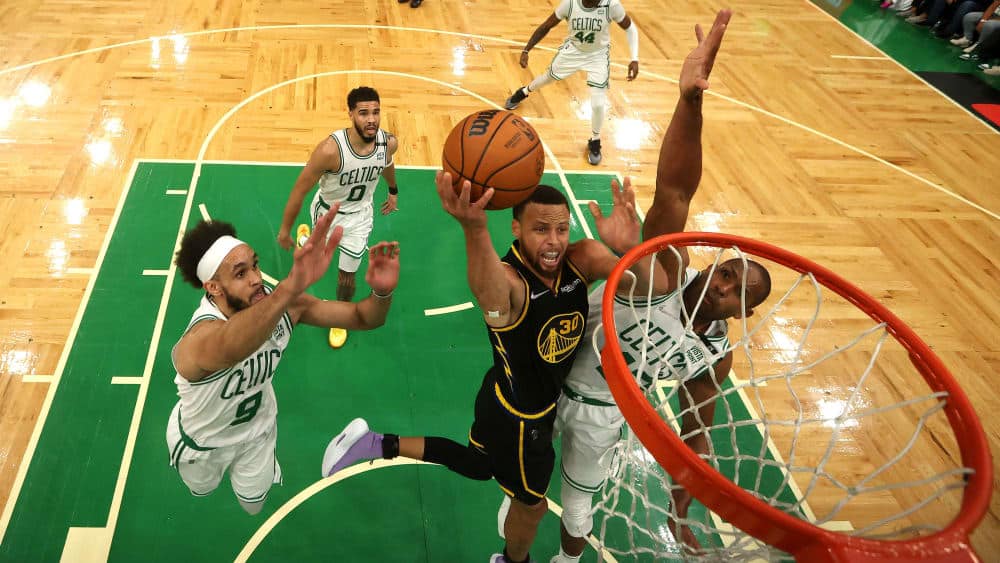 The NBA Finals are developing more and more into the expected tussle between two heavyweights for the championship. Once again the Golden State Warriors equalise, everything is open again. Two days after still facing an injury layoff, one man in particular excelled.

The pain in his left leg couldn’t stop Stephen Curry on his way to his gala performance in the important Finals win for the Golden State Warriors. The NBA superstar scored 43 points in the 107-97 win over the Boston Celtics, and the Celtics are now 2-2 instead of 3-1 in the hard-fought series ahead of the fifth game on Tuesday morning (3am CEST) – and everything is open again in the championship tussle of the world’s best basketball league.

“There’s been a lot of talk in the last 48 hours about how we can get back in this series,” Curry said, still breathing heavily at the deafeningly loud TD Garden in Boston minutes earlier. “It’s crazy, but I think we can play a little better.” He also stressed the importance of success with some distance at the press conference, “It means everything when you realize the urgency to keep us alive in this series and get some momentum on our side. “

Since Celtics pro Al Horford fell on Curry’s left leg two days earlier, Warriors fans had been anxiously waiting to see how much the pain would affect their best player. On the face of it: not at all. “It never looked like it was a factor,” Warriors coach Steve Kerr also noted.

Curry was immediately in the game and with twelve points helped a lot to turn the early deficit into a lead before the end of the first quarter. The lead changed back and forth a total of eleven times – that it remained with the Warriors in the end was decisively due to Curry’s converted late throws and the total of 43 points for him. Ten rebounds were also outstanding. Other NBA stars commented appreciatively on the performance via Twitter, including LeBron James and Joel Embiid. Curry himself was more extroverted than ever. “Steph doesn’t usually show a lot of emotion,” Kerr said.

“The heart of this man is incredible “

“This man’s heart is unbelievable. He went out there and put us on his shoulders,” praised Curry’s teammate Klay Thompson, rating the performance as the best he’s seen from Curry in a playoff game: “He was unbelievable.” Seven of Curry’s three-pointers went in and, as in the previous three games, he was successful from distance at least five times – that has never happened before in an NBA Finals series.

The Celtics were as convincing as a team as they were in the home win two days before and defended the Warriors very disciplined one after the other. But weak three-point attempts in the final quarter cost them the lead and the victory. Jayson Tatum was the most successful Celtics professional on the field with 23 points. In contrast to the first two games of the final series, national basketball player Daniel Theis again did not play.

With 17 titles, the Celtics have significantly more than the Warriors, who are hoping for championship number seven. Between 2015 and 2019, however, the San Francisco team has been to the Finals every time and won three championships – the experience still present in the team from the recent past, with the likes of Thompson, Draymond Green and Curry, is one of the assets for the Warriors in this Finals duel. “I’m here for the sixth time,” Curry said. On the Celtics’ squad, on the other hand, it’s everyone’s first Finals series.