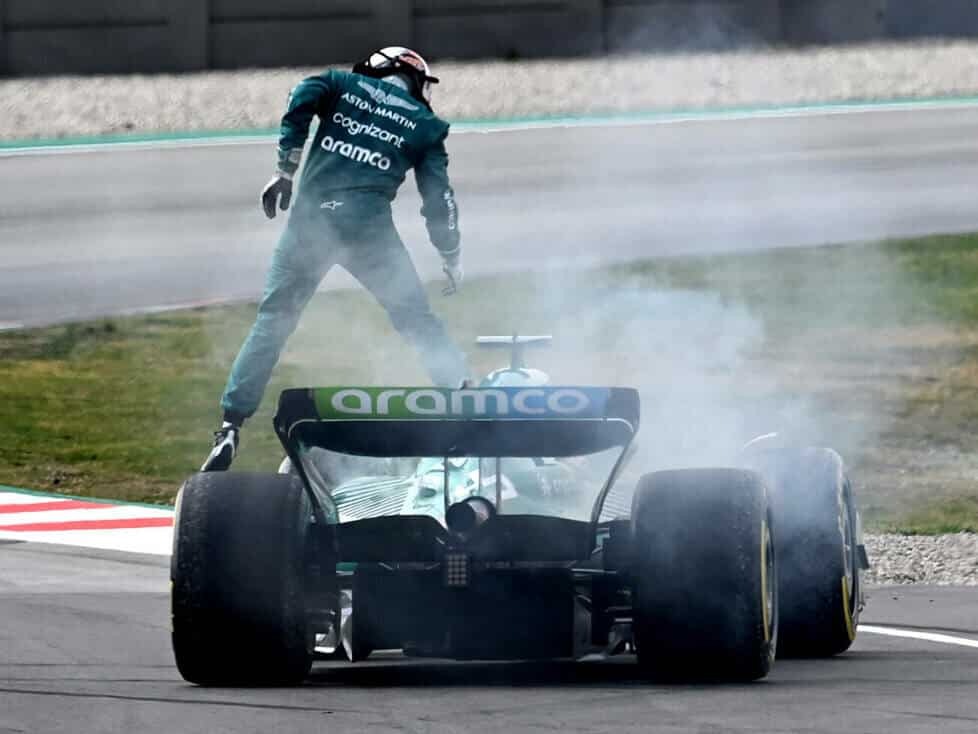 Aston Martin was unable to take to the track again after Sebastian Vettel’s fire, but still draws a positive conclusion from the first week of testing

For Aston Martin, the test week in Barcelona came to a sobering end. After Sebastian Vettel’s car caught fire due to an oil leak a few minutes before the lunch break, the team’s working day ended prematurely. Lance Stroll was unable to participate again in the afternoon as planned.

“The third day was disrupted by a small oil leak that started a small fire,” said performance director Tom McCullough. “This was efficiently brought under control but unfortunately ended our test prematurely and prevented us from trying the new 18-inch tyres in the wet.”

For as a result, Aston Martin missed the scheduled rain test when the Circuit de Barcelona-Catalunya was artificially watered in the afternoon.

But the team was one of no fewer than four racing teams unable to take to the track in the afternoon on Friday. Sebastian Vettel remained fifth in the daily standings with 48 laps, but is still quite happy with his week of testing.

“It was a useful few days and we learned a lot about the AMR22, although like all teams we still have a lot more to learn, considering it’s a brand new generation of Formula One,” said Vettel, who completed a total of 174 laps over the three days – the ninth most of any driver.

His teammate Lance Stroll also only managed 122 laps due to the cancelled afternoon, which makes him 15th in this ranking. “It was a shame we couldn’t do a single lap in the afternoon, but still it was great to be back behind the wheel of a Formula One car,” said the Canadian.

“We learned a lot about the AMR22. It’s important because the cars are completely different this year,” he continues. “It’s a completely new philosophy that we need to understand, so we are working out how to set up and drive these cars. We are on a steep learning curve and we want to make further progress in Bahrain. “

First impressions of the new car are positive for Sebastian Vettel, who had set the seventh fastest time overall at the end of the week, 0.686 seconds slower than leader Lewis Hamilton. “It was a shame that we had the problem at the end, but we did a lot of laps so we can be happy with our work this week,” he said.

For the statistics, Aston Martin combined for 296 laps or just under 1,400 kilometres over all three days, which is seventh. By comparison, Ferrari completed 439 laps, or more than 2,000 kilometres.

“The first two days of testing were pretty productive,” McCullough also points out. “Apart from Sebastian’s problem, we’ve run a useful programme and with all the laps we can now continue to learn as much as we can about the AMR22.”

“We will now go back to Silverstone, work through the data and then aim to have a productive test in Bahrain. “