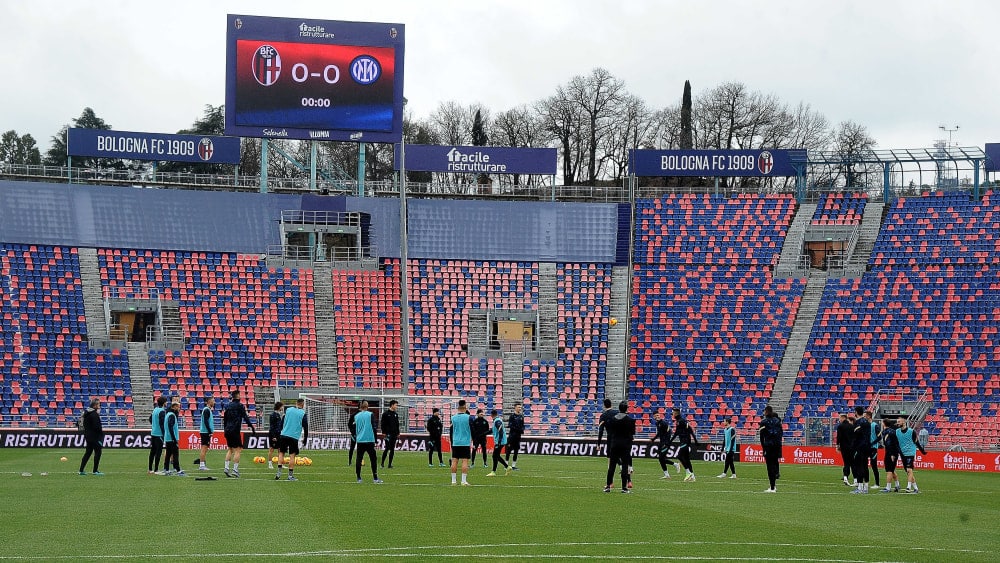 Warming up before a game that isn’t happening, health officials contradicting each other: Serie A has returned from the winter break with a lot of confusion.

Although the game in Bologna never kicked off, leaders Inter Milan may have opened their year with a 3-0 away win. It is one of several bizarre headlines that Serie A delivered on Thursday in the first matchday after the winter break.

The relevant health authority had quarantined the Bologna FC squad because of a Corona outbreak. But because Serie A has so far refused match cancellations, everyone else involved had to pretend that a normal league match was taking place at 12.30pm: The Inter professionals warmed up in the stadium before the supposed kick-off, the goal-line technology was checked, the pitch inspected.

According to the current Serie A rules, the match must now be rated 0:3 against the club that cannot play, i.e. Bologna. However, last year’s twelfth-placed side could take a leaf out of SSC Napoli’s book, who successfully averted a 3-0 defeat at the green table last season after a similar scenario and instead obtained a replay.

Although the winter break should have provided ample opportunity, the league had only agreed on new Corona rules at midday on Thursday. According to these rules, a Corona-plagued club will in future only have to play if 13 players – including one goalkeeper – have tested negative. A club that still does not play will lose 0:3.

For matchday 20, this clarifying protocol came too late. “The situation is chaotic,” Inter boss Beppe Marotta told “Sky Sport Italia”, although his club could, after all, benefit from the mess. He criticised the fact that local health authorities have so far been able to take care of match cancellations autonomously. Only with the new rules could the league override the authorities – so there is already the threat of new confusion.

At least the top match between Juventus and Napoli can go ahead as planned this evening, but it was not spared from the Corona chaos: A Neapolitan health authority ordered at short notice that SSC professionals Piotr Zielinski, Amir Rrahmani and Stanis Lobotka have to go into quarantine – after another health authority in the city had initially given the green light for the entire squad.

Will Milan hold their nerve? These are the decisions on the last matchday

Milan don’t celebrate on the sofa: Lautaro keeps Inter in the championship race