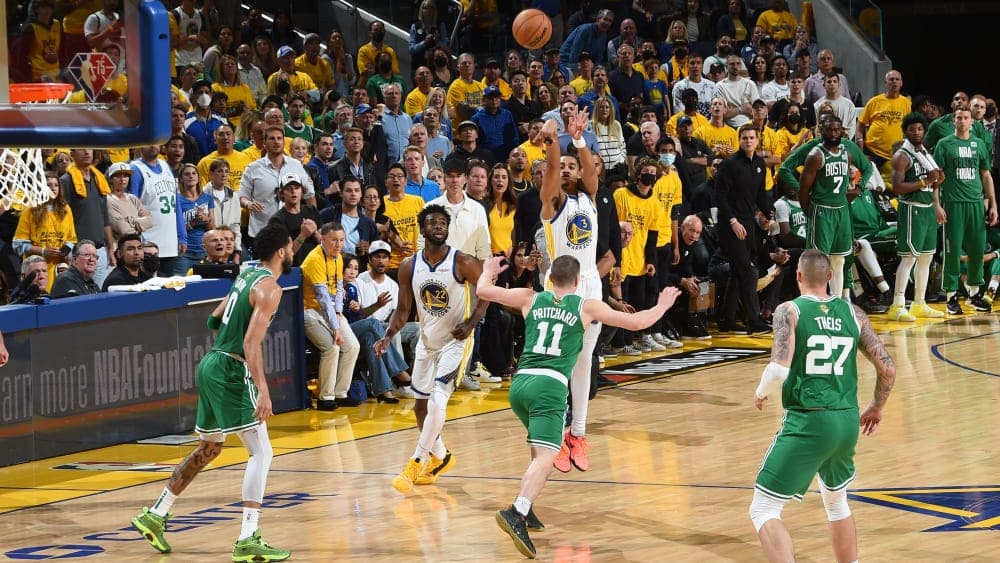 The Golden State Warriors won game two of the NBA finals series after an even first half and equalised the score at 1-1.


This time the Warriors stayed cool – and didn’t collapse like they did in the final period of the opening game, which they lost 108-120 to the Celtics in front of their home crowd. This time things went better – especially in the third quarter.


The Californians did just about everything, both up front and in the back. With 35:14 they laid the foundation for the ultimately clear and deserved 107:88 victory.

The Chase Center in San Francisco shook with every shot the home side converted, especially with a three-pointer by Jordan Poole (17 points) from almost the halfway line at the end of the third quarter.

For the Warriors, Stephen Curry led the way with 29 points (five threes, three steals) and narrowly won the duel with the visitors’ top scorer Jayson Tatum (28/6 threes) on points. In the end, the Celtics conserved their strength, so that reserves like Daniel Theis (zero points, five rebounds, one assist) also got some playing time. The German centre played 14 minutes in the game.

Theis: “There were too many turnovers “

“There were way too many turnovers. I think almost 20 turnovers, 33 points out of it. That’s the game,” Theis told dpa. “Third quarter, we have to turn that off. We can’t hope like we did in the first game to go minus-15 and then come back in a game like this. “

“Steph was stunning in that quarter,” Warriors coach Steve Kerr praised his superstar’s performance in Q3 in particular. “Not just the shots he hit, but his effort on the defensive end.” Curry was also pleased with himself and his defensive performance. “That’s always been a focus when trying to win basketball games,” the 34-year-old said. “I put a lot of work into that.”

The Celtics will now hope to have home court advantage in their next two games, but have already conceded a couple of losses in Boston this season. But, Taytum said, “It feels like we’ve relaxed a little bit at home recently. It might have been because we had home advantage. But we need some urgency and we need to play better at home. “

The two finalists meet again early Thursday morning (3am CEST). “We’ve come back from defeats all the way through the play-offs now,” Theis said. “That’s the most important thing for us now: to play our basketball and, above all, not to play so badly.” After all, after a 14-year drought, there should be celebrations again in Boston. With 18 triumphs, the Warriors have six trophies in the cabinet (last in 2018), the Celtics want to be the sole record champions again soon, ahead of the Los Angeles Lakers.