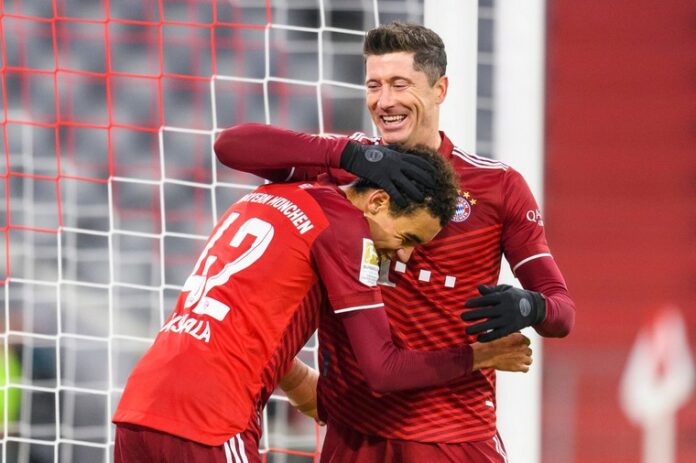 Robert Lewandowski set another record at Bayern Munich on Friday by scoring his 43rd goal of the calendar year against VfL Wolfsburg . With this, the Polish striker improved the record of Gerd Müller from 1972. After the match, trainer Julian Nagelsmann said that a curious moment preceded that record goal.

For a long time it looked like Lewandowski would end up with 42 goals. Bayern led 3-0 after an hour, but the goals came from Thomas Müller, Dayot Upamecano and Leroy Sané. Only after 87 minutes did Lewandowski strike on a pass from Jamal Musiala. The midfielder headed the ball towards the striker, who scored in one go. But Musiala should not have been on the field anymore.

Nagelsmann prepared a substitution a few minutes earlier. Malik Tillman would come on the field for Musiala, until the trainer suddenly saw Benjamin Pavard sprint into the catacombs. The trainer heard his defender shout something and then brought Tillman into the team for him. “In my best French I understood that he really needed to go to the toilet,” Nagelsmann said after the press conference.

The fourth official did not immediately realize that Tillman was in the squad for Pavard and not for Musiala. ‘I checked to see if Benjamin was coming back soon, but he wasn’t. That is why we have adjusted the switch. It didn’t work out,” Nagelsmann laughed, referring to the assist Musiala gave to Lewandowski shortly afterwards.

“I was very happy with that goal,” Nagelsmann later told DAZN. “He was beautiful. Upamecano’s lob, Musiala’s running action. And Lewandowski can only score that goal that way.’ The Pole was overjoyed that he finally got his hands on the record. ‘I am proud of the whole year. I have reached a higher level again. It was a turbulent year, full of emotions.’