HomeTennisNadal too strong for Hanfmann - doubles with comeback
TennisTennis News 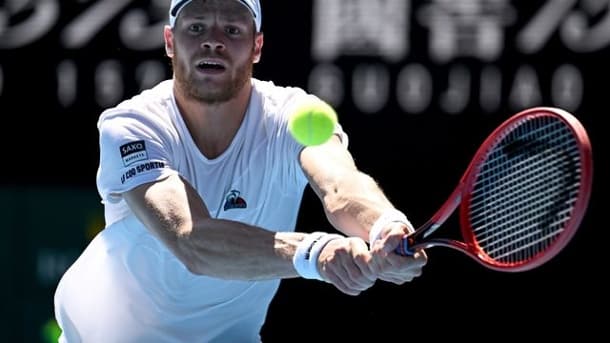 Melbourne – Tennis star Rafael Nadal was too strong after all: qualifier Yannick Hanfmann was far from a sensation at the Australian Open. The Karlsruhe player fought back valiantly in Melbourne with a 2:6, 3:6, 4:6.

“I know he’s dangerous,” Nadal said of Hanfmann after seeing him off Centre Court with appreciative clapping: “I think his tennis level today was much higher than his ranking position. “

Zverev as a great hope

Dominik Koepfer and Oscar Otte also suffered second-round exits. Koepfer, a Davis Cup player from the Black Forest, lost to the favoured American Reilly Opelka in three sets 4:6, 3:6, 6:7 (4:7). US Open eighth-finalist Otte was unable to repeat his success in New York and lost to Italian Lorenzo Sonego, seeded 25th, 6-2, 2-6, 3-6, 1-6. At last year’s US Open, the Cologne native had beaten Sonego in the first round and then surprised everyone by reaching the last 16 as a qualifier.

The great German hope at the Australian Open is Alexander Zverev. The Olympic champion from Hamburg will meet the Australian John Millman on Wednesday (2nd match after 9.00 am/Eurosport). On Thursday, Philipp Kohlschreiber from Augsburg wants to extend his stay in Australia with a win against Spain’s Roberto Bautista Agut.

In the doubles, meanwhile, the duo of Kevin Krawietz and Andreas Mies made a successful Grand Slam return. The two-time French Open winners advanced to the second round thanks to a 7-6 (9-7), 6-3 win over Santiago Gonzalez of Mexico and Andres Molteni of Argentina. Krawietz/Mies had made their comeback on the ATP Tour last week in Sydney, where they reached the semi-finals in their first tournament together in more than a year.

“I’ve missed him from time to time,” Mies told us with a smile. At the beginning of last year, the Cologne native had undergone surgery on his knee due to severe cartilage damage and subsequently had to take a break for months.

“I think that the break, as stupid as it was, maybe didn’t do us so bad,” said Mies: “Sometimes it’s like in a relationship. Sometimes you don’t really know what you have in each other and take it for granted. That wasn’t really the case with us. But in that year I realised once again what a great partnership we have.”

It took Australia’s world number one Ashleigh Barty just 52 minutes to reach the third round in the women’s singles. The home hopeful dispatched Italian qualifier Lucia Bronzetti 6-1, 6-1. Barty carries hopes in Melbourne of becoming the first Australian tennis player to win the Australian Open since Chris O’Neil in 1978.