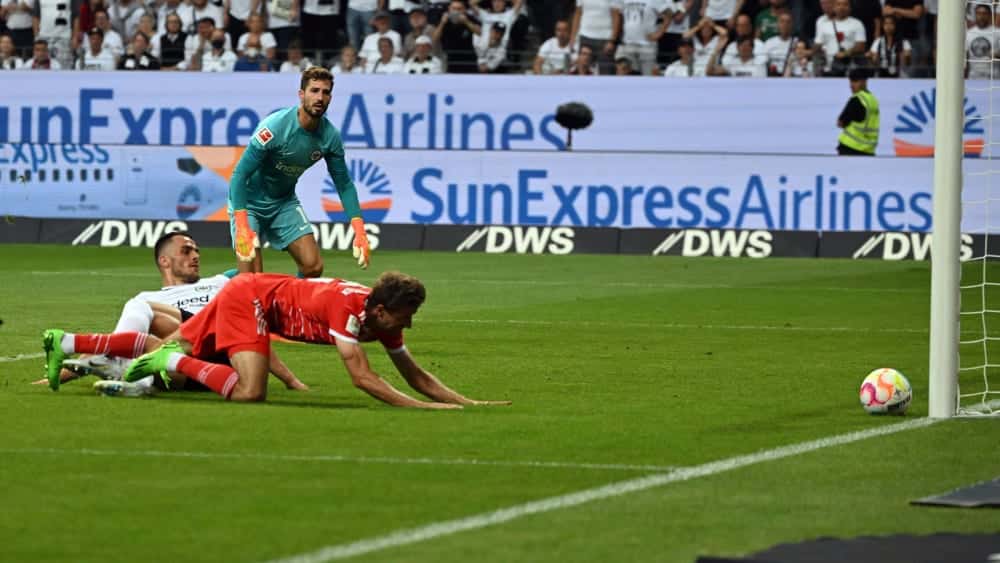 Thomas Müller missed an almost certain goal in Frankfurt in an interplay with Serge Gnabry – and had already guessed it.

With 21 assists, Thomas Müller was the top scorer in the Bundesliga last season, and he did exactly the same in the opening game of the new season: The international directly set up three goals in Bayern’s 6-1 win in Frankfurt. But the fact that he didn’t score himself was also a topic of conversation afterwards.

Because: Müller had missed a great chance at 2:0 in the 23rd minute, which does not happen often. Serge Gnabry and Thomas Müller had, as it were, run alone towards Eintracht keeper Kevin Trapp from the halfway line. However, Müller put Gnabry’s cross against the post and turned the scene into a slapstick performance by taking the rebound to his body while lying on the ground.

“Serge had a lot of time to think “

What had gone wrong? “I actually saw it coming a bit,” Müller said with a laugh on “Sat.1” after the final whistle. “Serge had a lot of time to think and then unfortunately the ball fell a little short for him. I then had to wait for the ball until Kostic had rushed past. And then it certainly looked … how should I put it? Well, it’s probably already circulating on the internet. “

In fact, Gnabry’s too-late and too-powerless cross had allowed the sprinting back Filip Kostic the chance to irritate Müller a bit more by straddling him and shielding part of the goal. “It would have been nice if I could have put the rebound in with my head,” Müller thought, but even so, he didn’t dwell on it for long. “Shake it off and move on,” was his motto, “the rest of the first half was pretty cool”.

The 3:0, 4:0 and 5:0 followed before the break, with Müller setting up Gnabry perfectly for the latter.