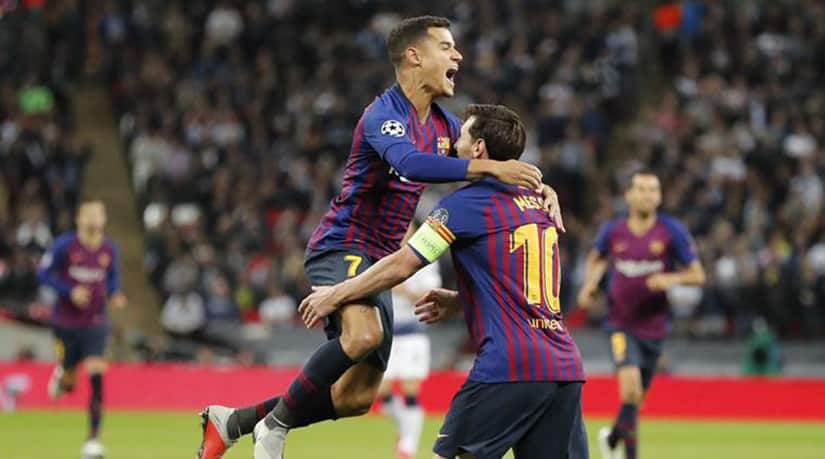 After three straight games without a win, Barcelona’s players were hungry for points. They got off to a fast start and then just kept it going in a 4-2 victory against Tottenham Hotspur.

Later on, Ivan Rakitic doubled the lead with one of the best goals of his career and a potential contender for Champions League goal of the year.

Barcelona went into half-time with a 2-0 lead and a bag full of confidence. There was no way to go but up for Mauricio Pochettino’s side after a dismal first period. The Spurs opened up, leaving space behind and Messi hit the post two times in identical fashion. Punishment for those misses came on the other end, where Harry Kane did what he does best and scored with a cool finish.

The hope didn’t last long, as Messi did get his goal five minutes later. This time, the ball went inside that same post he hit twice before.

Tottenham got back into the game once more through Erik Lamela, whose shot from the edge of the box deflected off Clement Lenglet and fooled ter Stegen.

The English side made things interesting, but Barcelona’s win was never in doubt. After another defensive mistake, Leo Messi sealed the win as regular time expired with his second goal of the match and fifth of the new Champions League campaign.

Now, the Catalans can look forward to two games against Inter, who are also on six points after defeating PSV in Eindhoven. Meanwhile, Tottenham Hotspur have some catching up to do. Fixtures against PSV should provide a nice opportunity to do so, but the Dutch shouldn’t be taken for granted. Four points from those two matches is what The Spurs need. Anything less could spell doom for their chances of progressing.