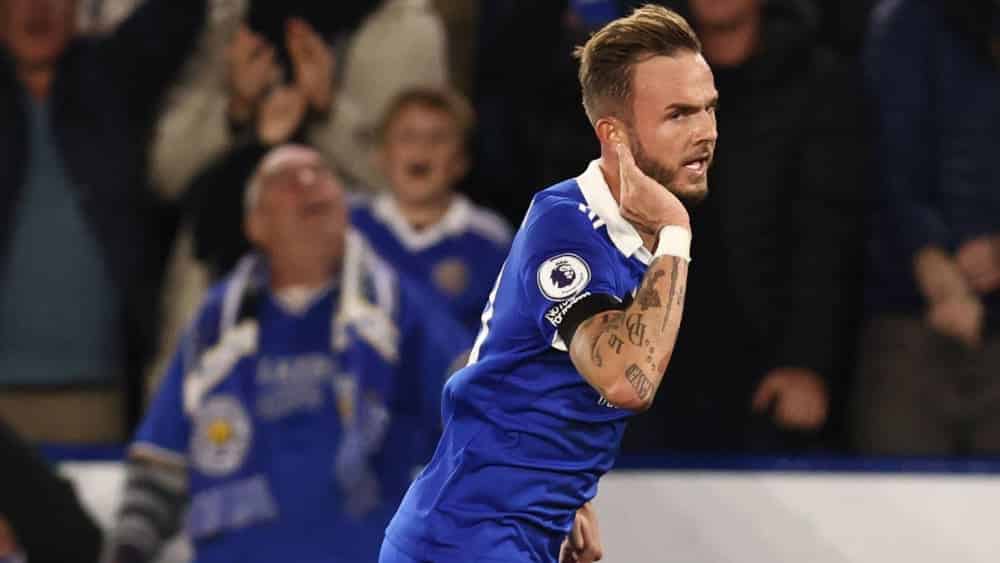 Leicester’s pivot Maddison stepped up to take a free-kick and stroked the ball into the net with the help of the inside post to make it 3-0. The ten-man was involved in three of his team’s crucial goals in just ten minutes – and was also instrumental in their first win of the season at the eighth attempt.

Leicester’s ten-man showed off his skills after just five minutes. Maddison took Brazil international defender Renan Lodi by the scruff of the neck and lifted the ball sensitively in front of goal – it was Drewsburry-Hall’s weak header that prevented the score from being 1-0 at that stage.

So Maddison took matters into his own hands: For the clearly dominating home side, he scored after Awoniyi’s goal against the post (22.), deflected strongly to make it 1:0 (25.), and shortly after that he initiated an attack which Barnes completed just as beautifully for a double strike (27.). Maddison put the icing on the cake with his free kick (35.).

It was hardly noticeable that the Foxes were almost behind before their three goals. Former Union attacker Awoniyi failed once to beat Ward (52nd), but that was all Nottingham could manage offensively.

Daka’s final point with the heel

The Foxes instead went 4-0 up, despite taking it out of gear: Daka finished off Maddison’s preparatory work with his heel in the penalty area (73rd).


Leicester pass the red lantern to Nottingham Forrest after their first win of the season. Recently controversial coach Brendan Rodgers should breathe a sigh of relief. For Steve Cooper and Nottingham Forrest (zero points from the last five games) it gets even more uncomfortable.