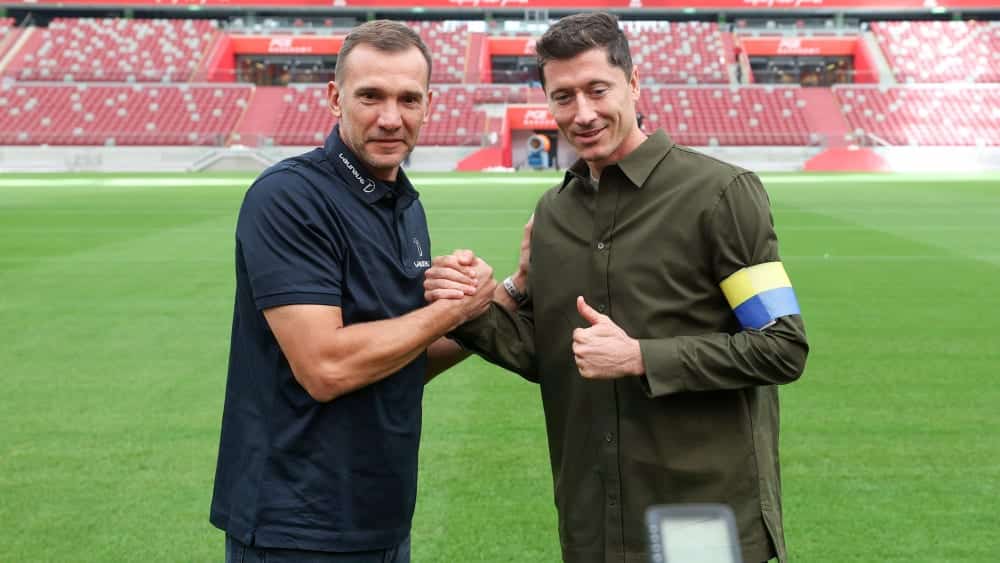 As a sign of solidarity with Ukraine, Poland’s star striker Robert Lewandowski wants to wear a blue and yellow captain’s armband at the World Cup in Qatar.

The former Bayern pro was presented with the armband by Ukrainian legend Andriy Shevchenko at a meeting at the national stadium in Warsaw on Tuesday. “Thank you, Andriy. It was a pleasure to meet you! It will be an honour for me to wear this captain’s armband in Ukraine’s national colours at the World Cup,” the FC Barcelona striker wrote on Instagram, posting a picture of himself and Shevchenko.

Poland will play Argentina, Saudi Arabia and Mexico in Group C at the World Cup in Qatar from 20 November to 18 December. The Ukrainians failed to qualify and were narrowly defeated by Wales (0:1) in the play-offs.

Lewandowski had previously expressed his full support with Ukraine, which has been fighting off a Russian war of aggression since 24 February. The goal scorer and his Polish national team colleagues had publicly declared that they would not play Russia in the World Cup play-offs on 24 March as scheduled. Poland eventually qualified for the tournament by beating Sweden 2-0.

“We can’t pretend that nothing happened,” Lewandowski had said at the time. Shortly afterwards, the Russian national team was banned from all international competitions by the world governing body FIFA. On Tuesday, UEFA announced that Russia will not take part in the draw for the qualifiers for Euro 2024 in Germany.