HomeUEFALast instead of final: Olympiakos looking to catch up
UEFAUEFA Europa League 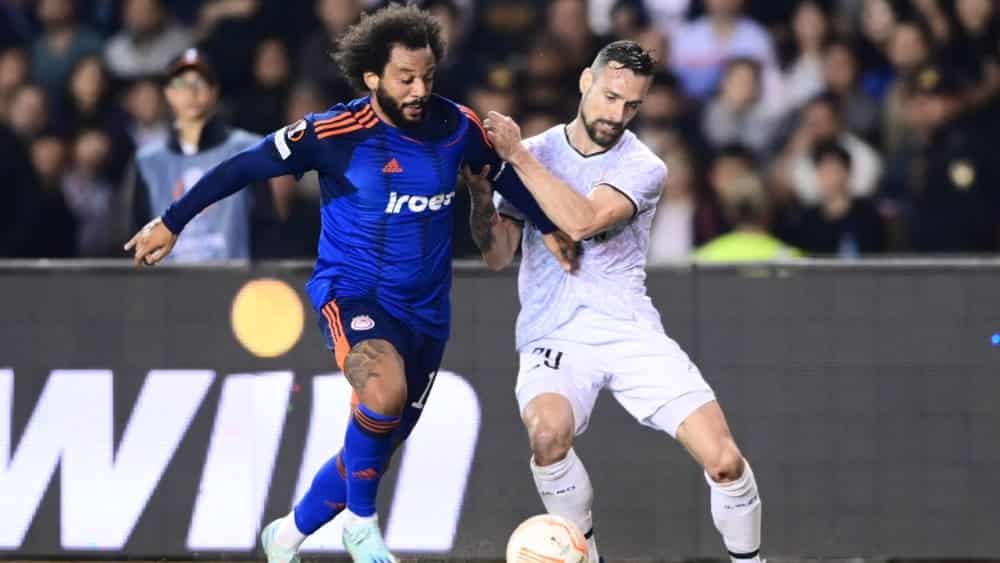 Olympiakos Piraeus dreamed of the Europa League final, but the Greek serial champions have already been eliminated. And is desperately looking to catch up – both internationally and nationally.

It was early September when Olympiakos sporting director Christian Karembeu was asked about the Greek serial champions in the run-up to their Europa League group stage premiere match against FC Nantes – where he once started his glorious professional career – in the French news agency AFP: “Our biggest dream is to reach a Europa League final and why not win it sometime.” He also made a statement about world star Marcelo, who had just arrived in Piraeus: “Nobody could believe it, it was just magical.” Another was to follow with James Rodriguez a few days later. Two weeks later, a new coach arrived in the form of Real legend Michel.

Barely two months later, the reality is different. Before today’s penultimate group match in Freiburg, Olympiakos is last in Group G with just one point and already eliminated from the Europa League. Against the Breisgauer, the port cities must score to get the chance of a final match against Nantes for 3rd place in the group. This would at least secure the consolation prize Europa Conference League and thus the European winter.

The record champions are also lagging behind in the domestic Super League. They are already ten points behind their rivals Panathinaikos, who started the season with nine wins in nine games. Second-placed AEK are four points behind, and even surprise team Volos are three points ahead of the serial champions. Olympiakos recently lost their home match against PAOK, who are currently wavering just as much (1:2). The title defence, which is almost expected every year, seems more than doubtful at the moment. Although the team under coach Michel is more structured than under his predecessor Carlos Corberan, who was in charge for only 44 days, consistency is missing.

In the 19 European and league games so far this season, 38 players have been used. Michel’s initial wish to work with 24 players and three goalkeepers has not yet been realised. Currently, they are working with Felix Magath’s version of “Training Group B”, for players who hardly play a role.

James is not eligible to play – Marcelo struggles to connect

A supporting role is gradually being found by world star James, who is tying for the league lead with one goal and two assists (in four league games). He is not eligible to play in Europe because he only moved to Piraeus as a club-less player in mid-September, which was too late. In contrast, Marcelo, who is registered for the Europa League, is struggling to keep up with muscular problems and a lack of fitness. So far, the 34-year-old has only managed three short appearances and a total of 73 minutes of play.

Despite the huge number of players, coach Michel had to retrain 19-year-old Andreas Ntoj from second-team midfield to centre-back in the goalless draw at Qarabag Agdam in view of the defensive problems. Diadie Samassekou, who should be fit and was loaned from Hoffenheim, has also only made two short appearances over 20 minutes so far.

It’s been an extraordinary season for Olympiakos. The turbulent summer, the flood of transfers, three coaches trying to cope with the mammoth squad. The constant harping – after every game – about refereeing decisions doesn’t please every Olympiakos fan either. Just as little as the statements of Sokratis (189 BL games for Bremen and BVB, 44 PL games for Arsenal) because of “two denied penalties and four fouls around the sixteenth”. Even if it is meant as a diversionary tactic or leverage, it helps little in sporting terms. Saving oneself for the World Cup break and then using it to reduce or optimise the squad with the aim of catching up with the league competition would be the more effective way. With the necessary consistency and class, we will eventually be able to pursue Christian Karembeu’s dream.