Monday was media day across the NBA. Several stars took center stage and talked about the upcoming season, expectations and goals. None drew more attention than LeBron James. The 33-year-old hadn’t spoken to reporters since joining the LA Lakers three months ago, so in a way, this was his official unveiling.

Dressed in a purple-and-gold Lakers uniform, LeBron James addressed the media. They were hoping to talk to an open-minded James and hear explanations regarding his decisions. Instead, what the reporters got were serious answers from a player ready to take on a new challenge and a leader looking to set the tone early. 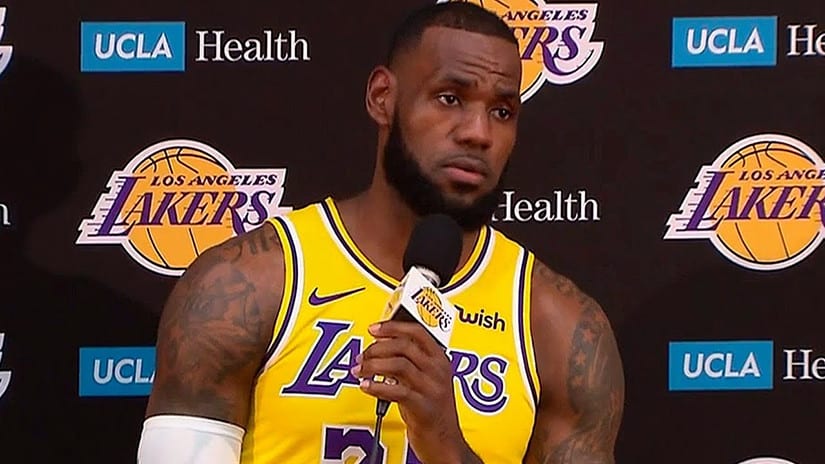 When asked about his expectations with the Lakers after willing teams to eight straight NBA finals, he replied:

“My expectation is to try to get better every single day,”

“What I know I can bring to the table is being committed to having excellence every single day, from a mindset standpoint.”

When another question teased him about moving to Los Angeles in order to expand his business, he gave one more predictable answer.

“My decision was based solely on my family and the Lakers,”

“ I am a basketball player. I play ball, that’s what I do. That’s what I live by, and when I do it at the level I do it at, everything takes care of itself.”

In general, LeBron James answered what he wanted to answer. He was brief, concise and left no room for fun and games.

Question: “At this stage of your career, what brings about pressure?”

It was business as usual for NBA’s best player, who left the press conference satisfied and moved on to do some interviews and take some pictures. His Lakers teammates were there, as was GM Magic Johnson, who listened closely from a balcony nearby. Interest in them was relatively non-existent, though. All the attention was focused squarely on LeBron James – the star of the show.

Luke Walton was there as well, and he admitted James’ tight-lipped tone was 100% intentional.

“He knows what time it is,”

“He’s setting the tone that it is time to come to work. There is definitely that look that I’ve seen before.”

As a former Laker, who shared the court with another all-time great Kobe Bryant, Walton knows all about THAT look. Get ready West! LeBron James is coming for you.