HomeFootballKlopp ecstatic: "Darwin has opened up a lot for us".
FootballFootball News

Klopp ecstatic: “Darwin has opened up a lot for us”. 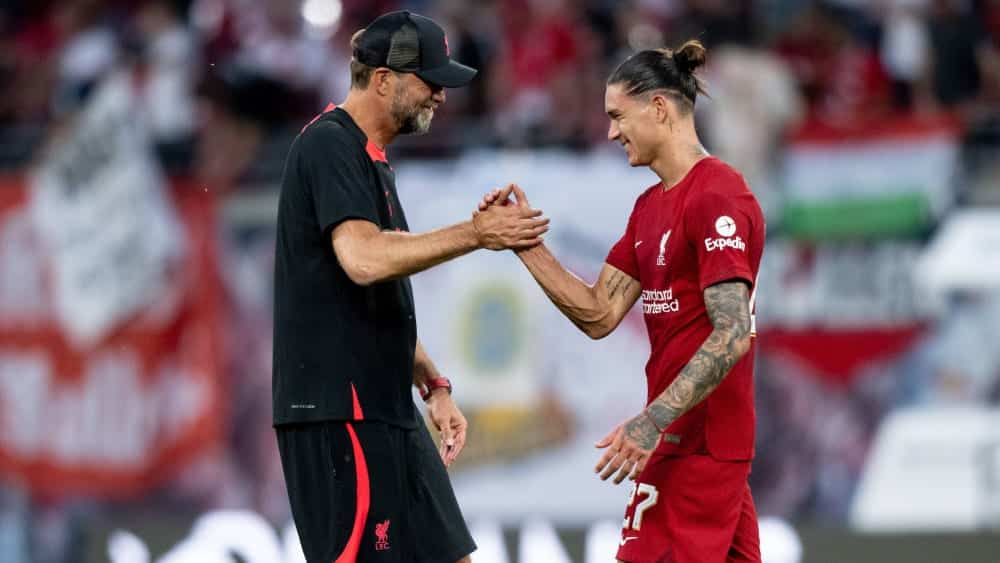 Jürgen Klopp added to his trophy collection with Liverpool FC by winning the Community Shield for the first time. He had his new striker to thank for the English Super Cup success, which drew praise from the German coach.

35 minutes. That’s how much time Liverpool’s king transfer Darwin needed to make a decisive impact for his Liverpool FC in the Community Shield final against English champions Manchester City.

The 23-year-old striker showed only good signs at first and failed to beat keeper Ederson shortly after coming on as a substitute – but that did not deter him in his first competitive game for the Reds. Before Mohamed Salah made it 2-1, Darwin forced Ruben Dias into a handball that led to a penalty, and in stoppage time he scored himself with a stunning diving header. Unsurprisingly, his new team praised him afterwards.

“His performance must be highly regarded,” opened 1-0 scorer Alexander-Arnold on “ITV Sport”. The factor in attack had finally brought about the decision “and looked very lively”. Alexander-Arnold said that Darwin had impressively demonstrated why he had been bought in and what he was capable of.

The same was true of Klopp, who said after the attacker’s 59th-minute substitution that Darwin was “involved in all the dangerous situations and opened things up for us”. The Uruguayan, Klopp continued, created “spaces that we could use. And he also finished off the scenes.” According to Alexander-Arnold, the reason for this is also the “good bond with the boys”.

Overall, Klopp was not entirely satisfied with the competitive match in preparation. Both teams were visibly away from their best form, “but what both teams did with what we had available today was incredible,” said the 55-year-old.

Klopp’s insight: “The boys are ready “

Summing up the game, which pleased him greatly, Klopp said, “I was more pleased with the start, but I have to say that all our substitutions made a real difference. That was the most important thing I learned today: The boys are ready.” Just like Darwin, who received special praise from Klopp.