“If you want to blame me – fine”: Donnarumma reacts defiantly 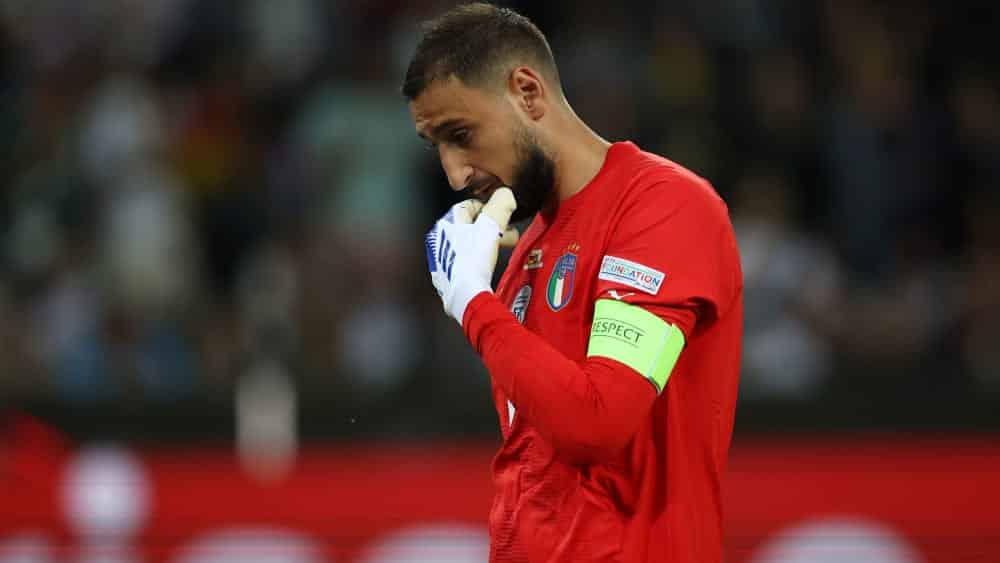 The result was clear, as was Gianluigi Donnarumma’s interview immediately after the final whistle. The captain of the Squadra Azzurra was very annoyed – and even suspected a campaign against himself.


There is no question that Gianluigi Donnarumma is an excellent goalkeeper. That the Paris Saint-Germain keeper, despite years of experience at the highest level for former club Milan, his current employers PSG or with his nation and winning the European Championship last year, can still improve a lot, however, is also clear. Keyword: opening up players with the ball at their feet.

One is reminded of the Parisians’ round of 16 second leg in the most recent Champions League season, when the 23-year-old played a terrible misdirected pass into the feet of Vinicius Junior when Karim Benzema was on target at 1-1, thus helping to concede the goal. In the end, it was to be 1:3 – and so PSG were eliminated early against the eventual winners despite a 1:0 in the first leg.

And there had also been such a scene on that Tuesday evening in the clear 2:5 in Mönchengladbach, when the Italians, who were not participating in the Winter World Cup in Qatar, conceded their first and at the same time heavy defeat in this competition. With the score at 0:5, Donnarumma had made a weak pass – this time into the foot of DFB wild card Serge Gnabry – and thus enabled Timo Werner to score a brace.

Donnarumma: “I’m keeping my head up “

After all, this is what an interviewer from “RAI Sport” mentioned to the successor of legend Gianluigi Buffon, who has recently been criticised by the Tifosi, directly after the final whistle. Donnarumma’s answer? It was clear: “When was the last time that happened? When I was fouled against Real Madrid? If we want to knit a controversy over such things, then fine … I am here to talk about that and about the team. If you want to blame me, fine. I’ll take the blame. I’m the captain – and I keep my head up. “

The man from the Gulf of Naples added in this regard, “I think you all want to engineer something because of these mistakes. Very well …”

Incidentally, Donnarumma did not stay behind the fence about the Italian performance as a whole that evening at Gladbach’s Borussia-Park. Even the two late goals from youngster Wilfried Gnonto (FC Zurich), who at 18 years and 222 days old had become the youngest Italian scorer in senior international history, and Alessandro Bastoni could not hold back the keeper’s resentment.

More to the point, Donnarumma made it abundantly clear: “We’re pissed off! There are no excuses for today. We have to improve that in the future and go out there and show that this is not us. We missed everything today.”

Of course, after the end of an intense season for everyone and the current four Nations League games in 15 days, there was also “a bit of tiredness in the bones – but we are not looking for alibis. We have to look each other in the eye and come to terms with this. We are sorry for the fans that they had to see that. That’s not the way to do it. Simply everyone made mistakes today.” Of course, he also made mistakes himself: “I should have simply knocked the ball away when it was 0:5. But you learn from your mistakes and grow from them. “