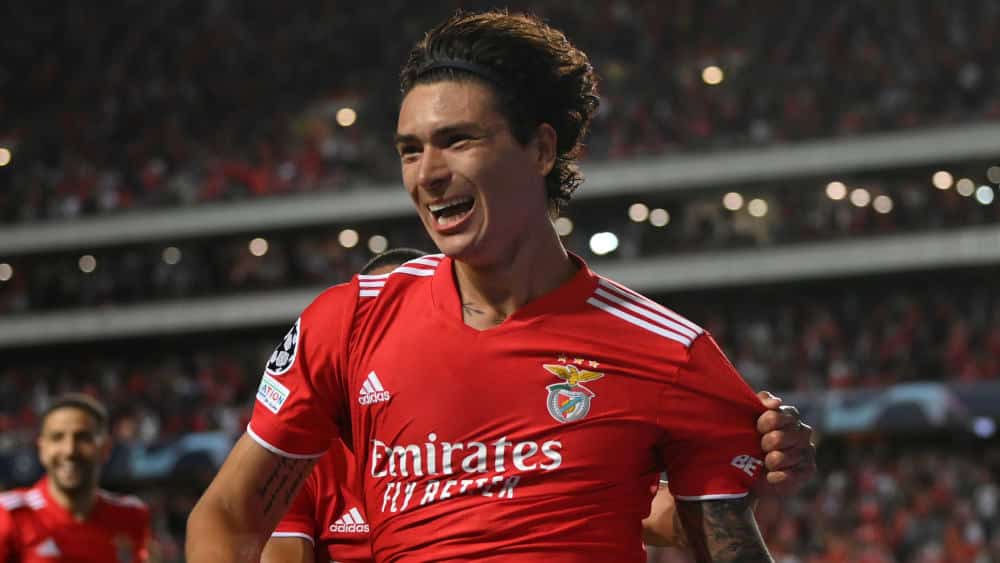 After four years, Liverpool FC have once again dug deep into their pockets: With Darwin (22) from Benfica, a great striker jewel is moving to Anfield Road. The Reds officially announced the transfer on Tuesday.


It still presents itself best on the spot: after scoring twice against the Reds in the Champions League quarter-finals, Liverpool FC have let go of Darwin from Benfica. The 22-year-old is considered one of the biggest strike talents in world football and is worth €75 million in transfer fees to Liverpool – with media reports adding a further €25 million in bonuses.

The 1.87 metre tall Uruguayan, who brings plenty of power and dynamism, signed a long-term contract. Liverpool did not disclose exactly how long it would be valid. The new man is expected to fill the gap left by Sadio Mané’s departure – so that Liverpool’s attack around Mohamed Salah, Roberto Firmino, Diogo Jota and Luis Diaz remains in the best possible position.

“I am very happy to be here at Liverpool. It’s a really big club,” enthused Darwin, who will be given shirt number 27. “I can’t wait to play for this club. I’ve played against Liverpool and watched a lot of their games in the Champions League. And that’s exactly my style of football.”

Darwin’s breakthrough came last season, when the central striker scored 26 goals in 28 league games for Benfica and underlined his quality by scoring six goals in the Champions League (ten appearances). From Penarol Montevideo (Uruguay), he had joined Spanish second division side UD Almeria on a one-year deal in 2019 before finding his way to Lisbon.

For one of the most exciting attackers of this transfer summer, LFC once again reached deep into their pockets after four years – 2018 saw the likes of Alisson (approx. 73 million euros) and Virgil van Dijk (approx. 85 million) arrive. Due to the bonus payments, Darwin is expected to replace the Dutchman in the foreseeable future and become Liverpool’s record transfer