How eleven heroes were born at Camp Nou 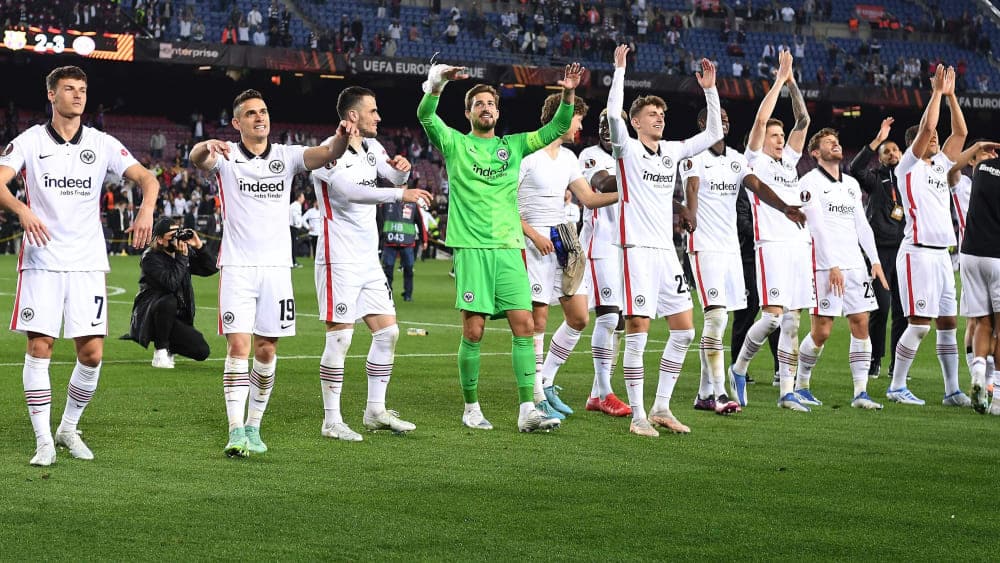 The match of the century at Camp Nou provides enough material to fill an entire book. What Eintracht showed in the 3:2 victory over FC Barcelona still seems almost surreal the day after. A tribute to the eleven heroes on the pitch.

It was a pitch black night for Kevin Trapp five years ago when, after a 4-0 first leg win over Barcelona at the Camp Nou, he and Paris St Germain went down 1-6 and were eliminated in the Champions League last 16. You don’t always get the opportunity to rewrite history in life. But for the German national keeper, a fortunate twist of fate came his way in the draw after advancing against Betis Sevilla.

When he entered the ring at 8.09pm on Thursday evening to the thunderous cheers of the Eintracht fans as he warmed up and waved to the supporters, the 31-year-old’s confidence could be felt high up under the roof of the stands. Throughout the game, Trapp radiated an immense calmness and sovereignty. His greatest moment came in the 55th minute when he prevented the 1:2 with a fantastic foot save against Pierre-Emerick Aubameyang – a key moment.

Almamy Toure experienced a resurrection like Phoenix from the ashes. In his old, former life, he was considered a “brother light-footer”, prone to lack of concentration and simple mistakes. But at Camp Nou he defended at the highest level and only lost out in a few scenes. This is remarkable not least because Toure had not been in the starting eleven since matchday 19 and was thrown in at the deep end without any match rhythm. But on the eve of the match, coach Oliver Glasner had left no doubt that the 25-year-old was up to the task: “I don’t have to babble at him for ten hours to please perform tomorrow. Almamy has trained super all the time and was always there. “

The Mount Everest from Carinthia

The story of Martin Hinteregger is quickly told: The Austrian, as in the first leg, cleared almost everything that his two supporting players could not defend and was much more than just the rock of the team. Since Mount Everest already exists elsewhere, it is about time that a mountain somewhere in his homeland is at least renamed “Mount Hinti”. The fans celebrated him like a world champion after the final whistle.

Whirlwind Ousmane Dembelé demanded everything from Evan Ndicka as long as he came down the right, but the Frenchman put up a good fight, defending with heart and brains. That is, until events came to a head in the long injury time. First the 22-year-old was shown a yellow card for knocking the ball away, then in the ninth minute of injury time he pushed Luuk de Jong to the ground in the sixteen. The penalty was undisputed, but the yellow card was too harsh a decision – referee Artur Soares Dias showed little tact. As a result, Ndicka will miss the semi-final first leg in London against West Ham on 28 April.

Kristijan Jakic played in central midfield with so much heart and adrenaline it was a real joy. The 24-year-old embodied everything that Barcelona lacked for long stretches: irrepressible will. In addition, the Croatian impressed again and again with clever passes and playful solutions – it was his best performance in the Eintracht jersey to date.

Maybe it was the best game of his life. Sebastian Rode played, fought and led like a true captain, he was the emperor in midfield. Yet the 31-year-old experienced physical setbacks again and again this season, never really got fit and is therefore no longer a regular player. But somewhere in Barcelona, Rode must have found a fountain of youth and drunk it up. Hopefully he’s filled up a few more bottles for the semi-final.

Ansgar Knauff was tied up defensively a lot, as expected, because in the game against the ball, a five-man chain formed quickly most of the time, in which the Dortmund loanee fulfilled the right part. However, when it came to fast switching moments, the 20-year-old speed dribbler was almost unstoppable. The most beautiful scene: When he moved from the wing into the middle in the 35th minute, he beat Jordi Alba and Ferran Torres as if they were two cardboard comrades. Only his finishing was not quite as good as that of the great Arjen.

Whoever caught Filip Kostic’s jersey should consider displaying it in the Louvre. The 29-year-old played like a master of his craft and scored ice-cold for Barca. With nerves of steel for the penalty and surgical precision for the 3:0 – he brought the crowd in the stands to its feet twice. The fact that Dembelé could not always be stopped does not detract from his great performance. Kostic himself spoke afterwards of the best game of his career.

With his insane pace, Jesper Lindström provided important relief time and again, and on top of that he scored the penalty for the 1:0. In his first year in the Bundesliga, the 22-year-old Dane is still at the beginning of his development, which makes it all the more remarkable that he can already make his mark on the big stage. The fans will have a lot of fun with the man with the rocket propulsion.

Yes, Daichi Kamada is often enough a bone of contention because for all his footballing brilliance, he lacks consistency. But on Thursday evening, not only the self-confessed Kamada fan Uwe Bein, Frankfurt’s legendary playmaker of the 90s, might have had his heart lifted. The Japanese player’s ingenious passes and filigree movements had a majestic air, he played like a royal – and that at the Camp Nou!

Like the final brushstroke in the making of a famous painting, Rafael Borré’s performance fitted perfectly into the overall picture. In recent weeks, the Colombian international striker has toiled and struggled up front as a lone striker, but repeatedly cut an unfortunate figure. The fighter just couldn’t get anything going, it was almost like a jinx. Until the 36th minute. Opposite number Ronald Araujo obviously had no idea what disaster was brewing, otherwise he would have defended more energetically. But Borré suddenly had enough space to fire the ball into the corner from around 25 metres. This shot will go down in the history books.