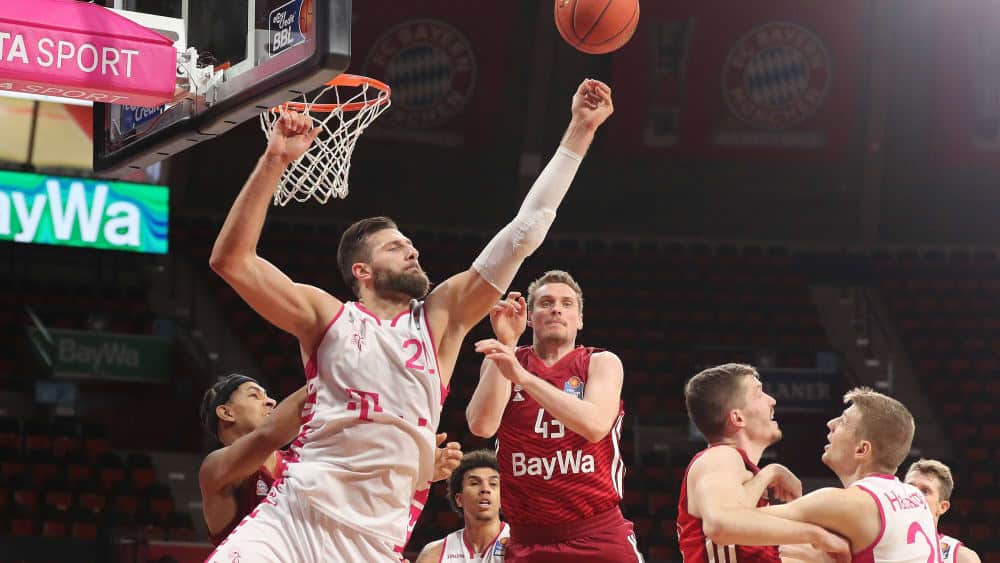 For a long time, Telekom Baskets Bonn were the surprise team par excellence in the BBL this season. On Sunday, however, the Rhinelanders were taught a lesson by their closest rivals Bayern München.


Bayern München set the record straight in the Basketball Bundesliga with victory in the top match against Telekom Baskets Bonn and are back at the top of the table. After the convincing 100:81 (49:21), however, things are still close, the cup winners have 24:8 points on their account, the Bonners 24:10 with one game more.

Bonn, who are playing a remarkable season so far under new coach Tuomas Iisalo, gave the hosts an eye-to-eye duel in the first half, but let up after the break. The Bavarians pulled away with a 12:0 run to 73:53, after which there was nothing more to be gained for the Telekom Baskets.

“A very good day at the office,” joked Trinchieri after the strong performance. He said he was happy that “we controlled the game for almost 30 minutes. It was a team success. We hit throws that didn’t go in in the last home games.” Bayern converted 19 three-pointers.

In Munich, Bonn suffered its third defeat in a row at the end of the first half of the season, having previously lost in Crailsheim and against Hamburg. The Bavarians, on the other hand, bounced back after a slip-up in their own hall against Chemnitz. The EuroLeague continues on Friday against Baskonia Vitoria/Spain.

In the second game on Sunday, ratiopharm Ulm beat medi Bayreuth 92:81 (48:48). The Ulm team thus celebrated their third win in a row and climbed to third place behind Bayern and Bonn. Jaron Blossomgame scored twice in a row for Ulm in the final phase and advanced to the best point scorer with 18 points.

Ulm had to do without their head coach Jaka Lakovic. One of the three rapid tests for the corona virus carried out on match day came back positive, as the club announced before the game.