Frankfurt are through to the Europa League final! SGE defeats depleted West Ham in second leg 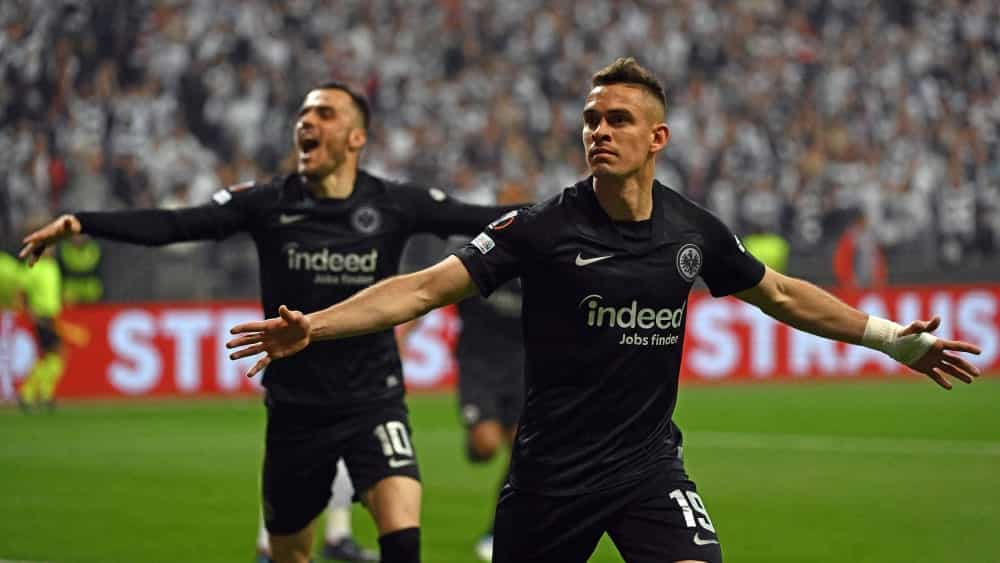 Eintracht Frankfurt hosted West Ham in the Europa League semi-final second leg to secure their place in their first European final since 1980. The entire Main metropolis was ready for a historic evening of football, which Eintracht capped with a home win after an early injury scare.

Frankfurt coach Oliver Glasner brought on two fresh players compared to the 2-1 win in the first leg. Lindström, behind whom there was “a big question mark anyway”, was not fit in time after his thigh injury. Hauge replaced the injured attacking player in the starting eleven. In addition, Glasner used Ndicka in place of Toure in the three-man backline. West Ham coach David Moyes also made no major changes to his starting eleven after the first leg, bringing in only one newcomer to the starting line-up, with Coufal replacing Johnson at right back.

Hinteregger has to go off early

But at the beginning of the game both teams were struggling anyway. The tension was obvious in Frankfurt and West Ham, as especially simple ball losses were not uncommon. In addition, Eintracht suffered a low blow as early as the fourth minute: Hinteregger injured his right thigh in a sprint duel with Antonio and directly indicated that he would not be able to continue. Toure replaced the Frankfurt defender.

However, the SGE did not let the loss of the centre-back faze them and gained a little more confidence in their own game. Eintracht also benefited from the visitors’ early sending-off: Cresswell was the last man to pull Hauge to the ground after a long ball and was shown the red card (19th), after referee Jesus Gil Manzano had reviewed the scene on the monitor and revised the original yellow card. West Ham faced a mammoth task from then on as the SGE fans were also incited by the sending off and whipped their team forward.

With the support of the fans, the burden fell off the shoulders of the SGE players. And Borré’s opening goal made Frankfurt shake: On Knauff’s assist, the goal scorer put the ball into the left corner (26th). With the lead behind them, Eintracht slowed down and stabilised more and more. West Ham, on the other hand, focused on counterattacks and defended almost exclusively in their own penalty area. Only once before the break were the visitors dangerous, but Ndicka cleared Zouma’s shot on the line (44th) and saved the narrow lead.

After the break, the fans saw a much slower game. West Ham kept the risk low for the time being and concentrated on counterattacks, which the SGE mostly stopped early and consistently. But Frankfurt did not really get on track on the other side. The home side lacked the wit and creativity to get behind the last chain of the compactly defending visitors, which is why there were no big chances for the time being.

The game got a bit more exciting as the final period began: West Ham took the risk, but did not create any dangerous chances, only Dawson hit an aerial hole at the penalty spot after a corner kick and missed the possible 1:1 (77.). Shortly afterwards, emotions ran high again and the visitors’ coach Moyes was sent off with red after a minor scuffle (78th). Joker Paciencia was able to end the gripping and rousing final phase almost immediately after his substitution, but missed the decisive 2:0 by a hair’s breadth (83.).

In front of their own goal, Eintracht were then lucky that the visitors’ final surge ended without any return: first Trapp saved from Antonio (89th), then Soucek headed next to the box from close range (90th), after which the SGE fans finally switched into celebration mode and prepared themselves for the final in Sevilla.

In the Seville final on 18 May, Frankfurt will face Glasgow Rangers, who prevented a German final with a 3-1 win over Leipzig. First, however, league football is back on the agenda: Leipzig receive Gladbach on Sunday (3.30pm). Also on Sunday (3 p.m.), West Ham host Norwich.