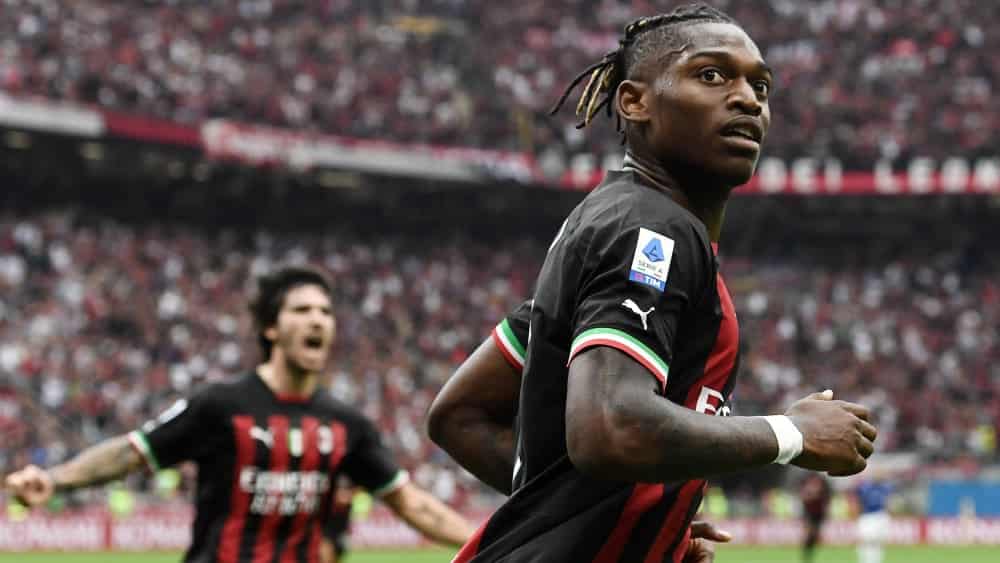 Milan is red and black, at least for the next few weeks: Milan won an outstanding derby della Madonnina against arch-rivals Inter 3-2 – thanks largely to two Rossoneri playing really big.

Derby della Madonnina. Only three words are needed to describe one of the most important football matches. Milan against Inter. Champion against runner-up. The enormous prestige at stake was obvious to the frenetically cheering fans, but also to the players – who seemed a little ponderous at the beginning. Gradually, however, the teams felt their way into the game, and at the latest after the first scuffle after nine minutes, it became visibly more intense.

Almost exclusively through asset Rafael Leao, Milan, who looked a little more in control and better, mounted their first attacks. Bastoni pushed a cross from the Portuguese – also due to a foul by Giroud – against his own crossbar (15th), a little later Leao took his own shot and tested Handanovic (17th). But suddenly Brozovic silenced the vociferous Milan tifosi: The Croatian finished off an ice-cold, determined combination (21.).

But the Rossoneri did not give up – and equalised to deafening cheers. Through whom? Leao, of course, who placed the ball in the far corner (28th). Tonali had previously intercepted a hair-raising miss by ex-Milan player Calhanoglu. What happened next can only be partially conveyed in words. Milan started an absolute pressure phase – while the San Siro shook. But neither Tonali, Theo or de Ketelaere, for example, were able to score the lead in the first half (35th, 37th).

Differently in the second 45 minutes: After Leao had only been accompanied, the Portuguese found his congenial partner Giroud, who scored fastidiously from a turn into the far corner (54th). Milan had been rewarded for their superiority – and added to their tally thanks to the duo. This time the French striker served Leao, who made three opponents look old around him with a quick step and a deception and slid in (60). Afterwards, AC pulled back a bit. And that was to take its revenge.

Suddenly, out of nowhere, substitute Dzeko appeared in front of Maignan’s box and, with the help of the post, brought Inter back into the game (67th). The Nerazzurri almost completed the double strike, but Martinez just missed (68th). It was the Argentinian who forced Maignan into a first brilliant save with his header from close range (70th).


Suddenly Inter were the better team and launched wave after wave of attacks – but once again Maignan was on the spot. The French goalkeeper made an outstanding save from a powerful shot by Calhanoglu (77). In the aftermath, however, the Rossoneri, who were the home side, once again got the fast-paced game calmed down and provided some relief. Inter almost equalised late on, but Mkhitaryan missed from distance by a yard or two (90.+5).

It was the final point of a magnificent football match, which Milan ultimately won and thus at least temporarily takes the lead in the standings.