HomeMotorsportsFinns at the rear of the GP22: Ducati with aero update at...
Motorsports

Finns at the rear of the GP22: Ducati with aero update at Silverstone 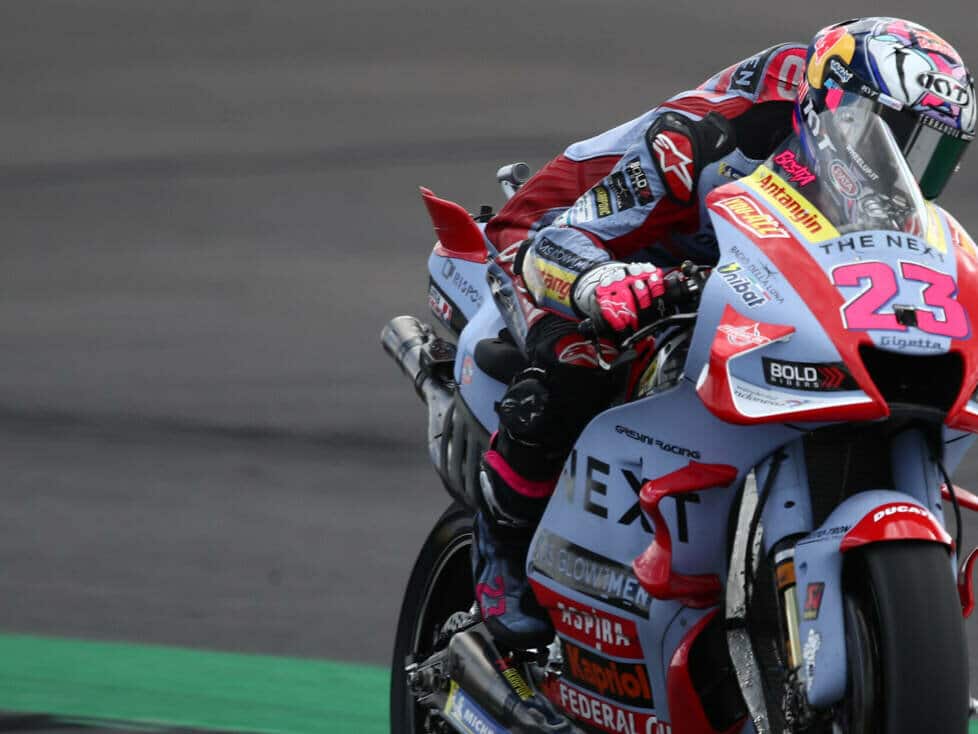 Once again a technical innovation from Ducati: what the riders’ first impression is of the “Stegosaurus” update on the GP22’s hump

On the first day of practice after the long summer break of the 2022 MotoGP season, it was once again the Ducati camp where a sensational technical innovation was on show

On Friday afternoon, just before the end of the second Free Practice session for the British Grand Prix at Silverstone, three of the five Ducati Desmosedici GP22s in the field were sent out on track with Finns on the rear.

They were the two bikes of the Pramac team of Johann Zarco and Jorge Martin and the Gresini bike of Enea Bastianini. The fins are fitted on either side of the hump behind the seat, with two of these new aero elements on either side.

Well… not too sure what to call this one!

In the paddock people are already talking about the “Stegosaurus” update, because the Finns are reminiscent of the plates that said dinosaur wore on its back in prehistoric times. But what do the Ducati riders in question think of the innovation after having ridden it?

“The first impression is good. But we’ll have to do some comparative tests tomorrow to understand which is the better option,” says Bastianini, admitting, “When I saw the fins for the first time yesterday, I just thought ‘Wow!'”

The Gresini rider already recognises one positive aspect of the innovation: “Especially when braking, the bike is more stable. That could definitely be an advantage in qualifying. The Finns certainly have the greatest influence on braking.” However, he has already identified a disadvantage. “When you get on the bike you have to be a bit more careful now,” Bastianini grins.

Jorge Martin, who also came out with the “Stegosaurus” update in the closing stages of FT2, on the other hand, is still cautious. “It’s not just about the fins. The fairing at the front is also different,” he notes, but admits: “Sure, the rear stands out the most. “

Martin doesn’t yet have a real impression of whether or not the fins make a difference. “I can’t say too much about it yet. I just know that I wasn’t very fast in the afternoon,” said the Pramac rider, who finished 13th in the FT2 result on that position also in the combined result of both Friday practices.

The fastest Ducati rider on Friday was Martin’s Pramac teammate Johann Zarco in P4. Gresini rider Bastianini lined up in P8. Both were ahead of Ducati factory riders Jack Miller (9th) and Francesco Bagnaia (11th). The latter had not yet had the new Finns on their bikes.

Zarco happy to have crashed in FT1

In the morning’s first free practice session, Johann Zarco had marked the fastest time ahead of “Pecco” Bagnaia after both crashed during the 45 minutes of practice. Zarco had gone down at Stowe (turn 7), Bagnaia at the exit of Maggotts (turn 3).

“I braked a bit too late,” Zarco reported. “First my rear wheel slipped and immediately afterwards I lost control of the front wheel. Maybe I could have stopped the crash, but I would have ended up in the gravel anyway. And with the pace I was on, it might have been even worse than the crash I had.”

In the afternoon’s FT2, Miller is also propped up at Stowe Corner. “After five weeks off, it was straight into the barrier for me. It’s not ideal, of course, but I’m fine,” said the Ducati factory rider.