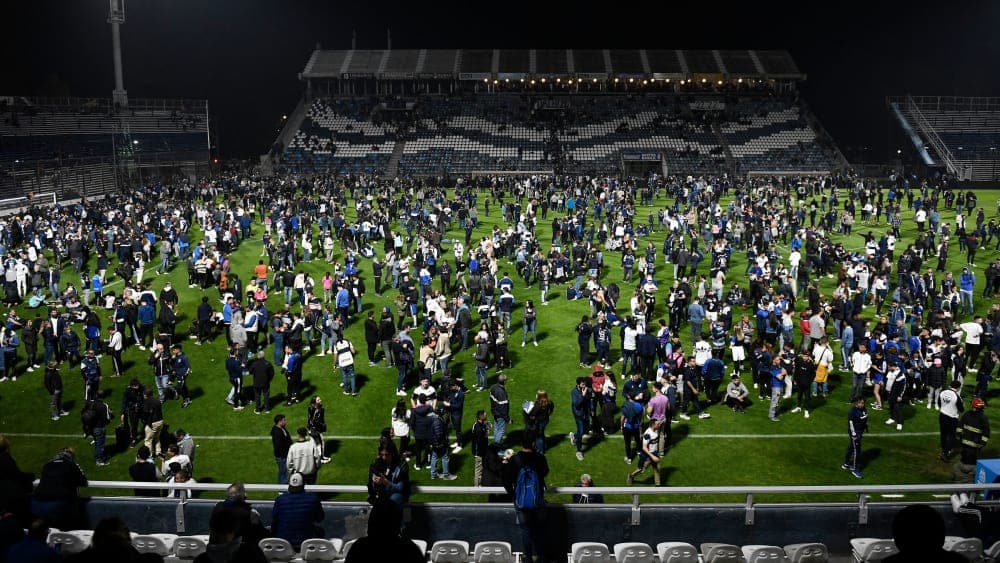 Rioting broke out before the Argentine first division match between Gimnasia y Esgrima La Plata and Boca Juniors from neighbouring Buenos Aires. The police intervened and a football fan succumbed to a heart attack.

Severe rioting and the death of a fan caused consternation in Argentinian football on Thursday evening. Before the first division clash between Gimnasia y Esgrima and Boca Juniors in Buenos Aires, there had initially been clashes between police and supporters outside the stadium. A 57-year-old man later died of a heart attack. This was confirmed by Sergio Berni, security minister of the province of Buenos Aires.

The incidents had quickly spread inside the stadium, an official reported, according to the AFP news agency: “Around 10,000 people were still trying to get into the stadium, some with tickets, others without. Everyone could see that the stadium was full.” He said all this was now being investigated, including “the actions of the police”.

Security Minister Berni nevertheless already blamed the organisers for the incident. They had sold more tickets than there were seats in the stadium. Due to frequent outbreaks of violence, guest fans have not been allowed at football matches in the province of Buenos Aires since 2013. Thus, only Gimnasia supporters were in the Juan Carmelo Zerillo Stadium.

Security forces used tear gas and rubber bullets to prevent people from entering the arena. The tear gas also moved into the stadium and across the pitch, fans then also tried to get to safety on the pitch. After just under ten minutes, the match was officially abandoned.

“You couldn’t breathe anymore,” said referee Hernan Mastrangelo: “The situation got out of control, there were no more safety guarantees.” According to local media, numerous fans were taken to hospital due to contact with tear gas, and a cameraman was also hit by a rubber bullet.

Only last Saturday, one of the worst sports stadium disasters in history claimed 131 lives in Indonesia. About 3,000 fans stormed the pitch and the use of tear gas triggered a mass panic.