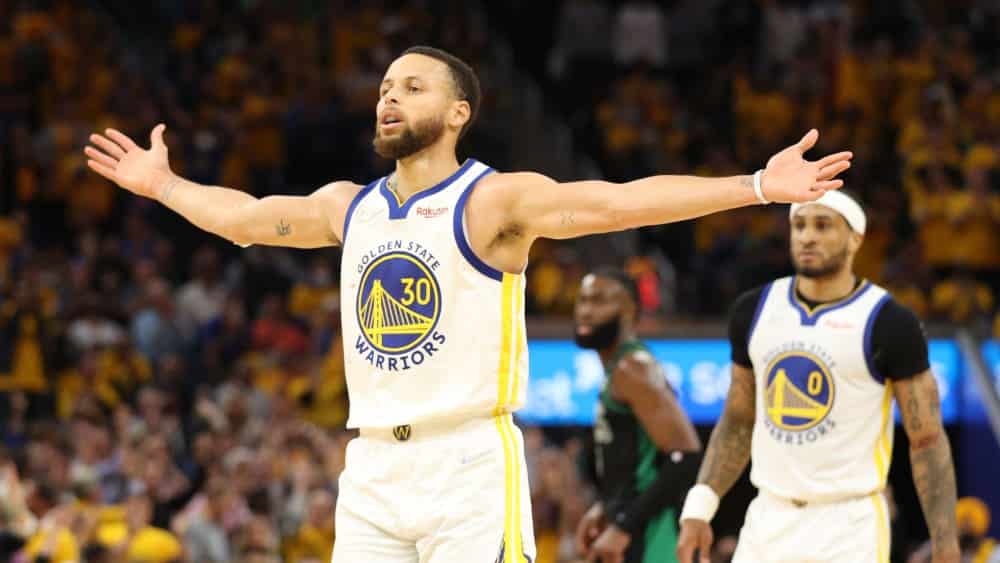 The Golden State Warriors are just one win away from their seventh NBA triumph after beating the Boston Celtics 104-94 – despite Stephen Curry having a poor evening.

The Golden State Warriors are only half the team without Curry – that’s the opinion of many NBA fans. That the team from San Francisco wins against the Boston Celtics in the Finals even on a used day of their best man is a strong signal. Curry did not convert a three-pointer, although he took nine attempts. The last time that happened to the 34-year-old was on November 8, 2018. “He didn’t hit one out of nine threes. He’s going to be furious. And that’s exactly what we need before game six,” Curry’s teammate Draymond Green said ahead of what could be a pivotal game in Boston on Friday (03am CEST).

Nevertheless, the Warriors celebrated a 104-94 win over a Celtics team that put up a valiant fight, especially in the third period, on Tuesday night. Golden State is now just one win away from a seventh title.

“Even for the best shooter in the world, there are games like this. Fortunately, not that often,” Warriors coach Steve Kerr said. Curry hit only seven of his 22 attempts, just 16 points in front of the home fans three days after his 43-point gala in Boston. The fact that the Celtics still trailed by 16 points in the first quarter and that even an outstanding rally in the third quarter to lead by as many as five points wasn’t enough for them seemed like a foregone conclusion immediately after the duel at the Chase Center. “That was more than just a run, they basically dominated the whole quarter – for us to still go into the last quarter with a lead was huge.” Jordan Poole had scored with the clock running out.

The message everyone heard: even without Curry in top form, the Warriors can beat Boston. Andrew Wiggins, in particular, had a strong night, wowing the raucous fans at the Chase Center offensively and defensively. He scored 26 points, grabbed twelve of his 13 rebounds on defence, plus two stolen balls. Klay Thompson had 21 points, Gary Payton II finished with 15 and Poole 14. “I can read that list completely – the whole squad did their part,” Thompson said.

While the Finals-bound Warriors had their fans celebrating, the Celtics slunk off the floor dejected and frustrated. “It’s about consistency for us and we don’t have that for a whole game,” criticised Celtics coach Ime Udoka, who was again completely without national player Daniel Theis.

Above all, the many, altogether 18 ball losses hurt the guests enormously. Golden State had only six. “We’re all frustrated with tonight, but the good news is we’ve been in this situation before and we’ve done it. So let’s do it again,” Udoka said. Even in the rounds before, the Celtics were just one loss away from elimination and still made it to the finals.

Confidence among the Warriors, however, is now high after losing their opener. “I’ve never been more excited to come to Boston,” said Thompson.