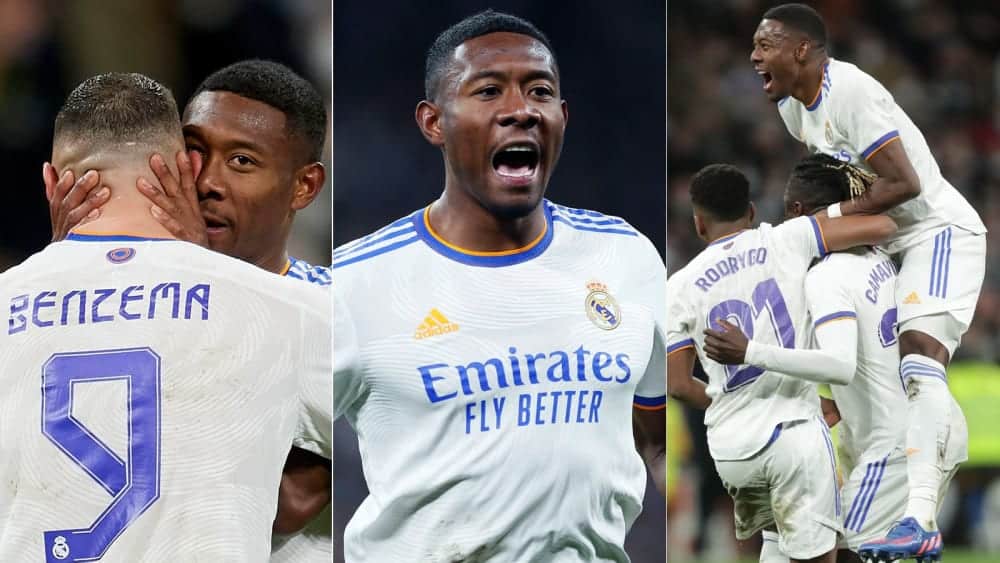 In Germany, some doubted whether David Alaba (29) had really done himself a favour with his departure from Munich. For a long time now, one has to say: yes.

His throne is made of plastic, but David Alaba will not sit down anyway. He has far too much energy for that in his first season at Real Madrid, in which he gives the impression that it is already his fourth.

Alaba doesn’t shy away from the centre of attention, he even seeks it at the biggest club in the football world. Just like during the ecstatic jubilation after Madrid’s 3:1 comeback victory against Paris Saint-Germain, when the 29-year-old (“It can make you go crazy”) suddenly grabbed a plastic chair and held it aloft like a trophy. The peak of his popularity for the time being.

You don’t become a crowd favourite in Madrid just by making funny gestures, but Alaba doesn’t have to rely on them at all. Taking over the number 4 shirt of the departing Sergio Ramos immediately after his arrival last summer was already enough of a gesture. Madridismo took a close look.

A few months later, people in the Spanish capital have almost forgotten that the royal club legend, who can hardly get a foot on the ground in Paris due to injury, is still playing at all. Real has a new defensive chief.

From the start, the two-time treble winner left no doubt that he will be the same in the (new) Estadio Santiago Bernabeu. Beyond the chosen shirt number. In the newly assembled central defence, which is no longer formed by Sergio Ramos and Raphael Varane (now Manchester United), but Alaba and Eder Militao, the Austrian plays first fiddle. Which is clearly audible.

In truth, the set-piece player is more of a conductor, loudly sorting out even seasoned teammates and taking opponents to task with a broad chest when they try to mess with his supporting players. How does that work so quickly? It is downright frightening how well Alaba already knows Spanish, revealed teammate Toni Kroos in his podcast “Einfach mal luppen”.

While other additions like Eden Hazard or Luka Jovic still don’t really seem like part of the team (something Gareth Bale never managed to do), Alaba already unites quite a few “insiders” with various colleagues under his Instagram posts. A reflection of the impression on the pitch. In the middle of it instead of just being there.

First goal in the Clasico

His first season at Real is only just getting into the hot phase, so it’s hard to imagine Madrid without Alaba. That presence, that push, the chair cheer. Or his hammer in the first Clasico for 1:0, his first goal in his new shirt – after a run over half the pitch. You don’t need big titles like that to anchor yourself at a club, even if that’s what it’s all about now.

With a ten-point lead (over second-placed Sevilla FC, mind you), the Royals head into a Clasico second leg on Sunday with only limited influence on the championship. Real have won all five of the past editions. If Alaba now also goes on a run of important goals, Sergio Ramos will soon really only be in the gallery of ancestors.

At Real, everything is indeed “a tad bigger” than at FC Bayern, Alaba reported in 2021 shortly after his arrival in Madrid. But apparently not too big for him.