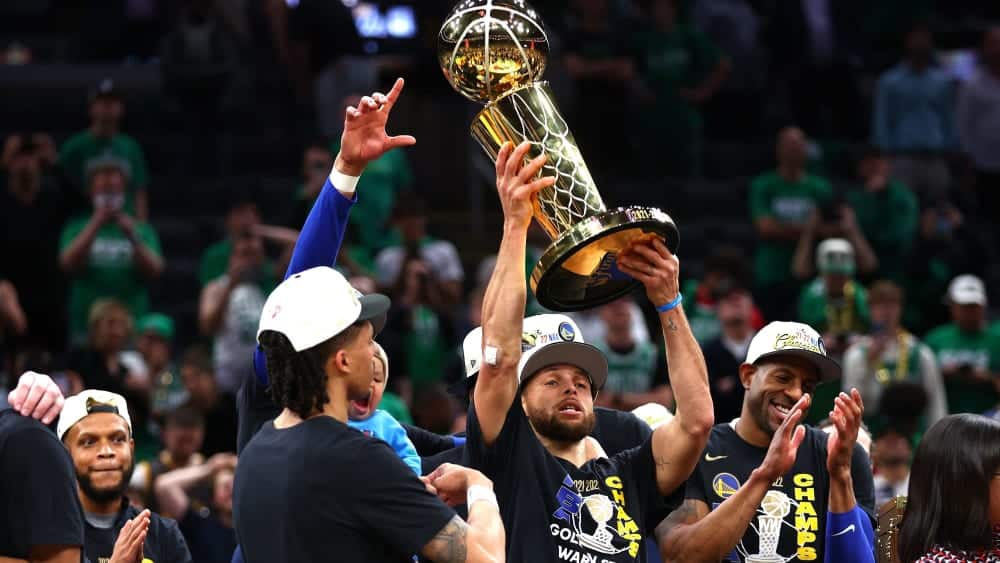 The Golden State Warriors are NBA champions for the seventh time! Superstar Stephen Curry led his team to a 103-90 victory in Boston on Friday night. That gives the Dubs a 4-2 lead in the Finals series.

“Let’s go Celtics” echoed through the atmospheric TD Garden from the first minute. With their backs against the wall and needing two straight wins, the Celtics used the energy on the floor for an extremely spirited start and a 14-2 run that electrified the crowd. The Warriors floundered, but promptly came back with several successful moves. And: after eleven points in a row, the visitors ended the first quarter with 27:22 and sucked some energy out of the rousing hall.

The Warriors extended their surge to a 21-0 run, such a high run had not been seen in the Finals for 50 years, and kept showing their experience. Turnovers (13) in particular again characterised the attacking efforts of the white-clad Celts until the break, while the visitors from San Francisco played themselves into a frenzy and spread the scoring over several shoulders.

Curry, Thompson, Wiggins and Poole all scored ten or more points in the first two quarters – ultimately leaving the nervous home side with a 15-point deficit after 24 minutes.

“The season is on the line, but we still have a half left,” Boston coach Ime Udoka said, hoping for a turnaround in the match after the break. But the first three-pointer after the break went to the visitors, Draymond Green scoring from a corner. Although Celtic, in the person of Al Horford, had something to counter at times, the home side failed to defend the Dubs’ three-pointer at all. After a deep hit by Curry from “downtown” to 72:50, the coach of the hosts was forced to call a time-out. Something had to change quickly to prevent the NBA record champion (17 titles, together with the Lakers) from having an early summer break.

It did get a little better and Golden State also gave the Celtics a chance to get back into the game. But Boston’s offence didn’t run smoothly at all, even top star Jayson Tatum wasn’t in the game at all during this phase. But the Celtics got their foot back in the game, somehow fighting their way in offensively and taking advantage of the visitors’ mistakes, who hardly hit anything anymore. It was a strange final game, both teams showed nerves. The Celtics came back with a 15:2 run, at the end of the quarter it was only 66:76 from the home side’s point of view.

Boston certainly got its chances in the final period, too, as the Warriors continued to lack rhythm offensively. But the Celtics just couldn’t get their game together that night to win such a crucial game in a Finals series. And while one star delivered with Curry, who ended up with 34 points in the boxscore, the other was ice cold with Tatum (only 13 points). The Dubs did it cleverly and knew again and again how to nip any brief hope of the Celts in the bud. In the end, it was 103:90 for the guests from San Francisco, who thus won their seventh NBA title.