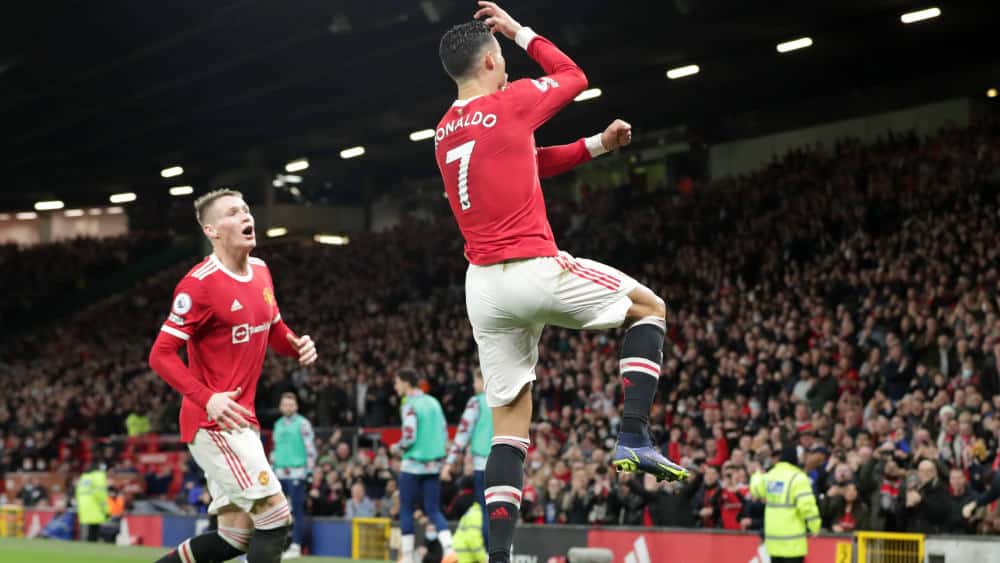 Manchester United won 3:1 against FC Burnley to close the football year. Ralf Rangnick’s team was particularly convincing at the start of the match.

United coach Ralf Rangnick was not at all satisfied with the recent 1-1 draw at Newcastle, his side lacking both pace and tackling toughness at the Magpies. As a result, there were six changes to the starting eleven, but Rangnick also made them to manage the pressure. Cavani was allowed to play alongside Cristiano Ronaldo, Sancho replaced the suspended Bruno Fernandes. In addition, Matic, Wan-Bissaka, Bailly and Shaw started for Fred, Dalot, Varane and Alex Telles.

For Burnley, the game at Old Trafford was their first after an 18-day break  – the Clarets’ last three games against Watford, Aston Villa and Everton were all cancelled due to corona.

The first duels in midfield initially went to Burnley, who showed their usual bite. Wood headed a Lowton cross next to the goal (4th), soon after Cristiano Ronaldo shot over after a long pass from Shaw (6th). The Portuguese was involved in almost all of the Red Devils’ offensive actions, including the 1:0: His unclean ball reception was perfectly converted by the strong McTominay from 16 yards, the Scot caught Hennessey in the short corner (8.).

United then tried to control the game but struggled to get forward and were mostly dangerous through individual efforts – Shaw finishing a solo effort on the outside of the net (24). The left-back was again present offensively three minutes later, this time sending Sancho on his way after winning a duel. The ex-Dortmund player dribbled into the penalty area on the left and, after a quick hook, finished directly. Mee put his toe into the shot and deflected decisively – 2:0.

Rangnick’s criticism paid off, the Red Devils were now clearly better and very present in the duels. Cristiano Ronaldo rewarded the performance in the first half with a third goal, after a shot against the post by McTominay, CR7 only had to push the ball over the line (35th).

Burnley were not without their chances despite being well behind and punished Bailly’s carelessness before the break with the 1:3 – Lennon finished a dribble precisely into the left corner (38.).

In the second half, United took a step back and did not take too many risks. Burnley had hardly any trouble defending the attacks of the home side, but were hardly dangerous themselves. After just over an hour, McTominay again shot dangerously at the visitors’ box from 20 yards, but this time Hennessey was able to parry (64th).

The Clarets’ keeper didn’t get much more to do and it remained 3-1 to the Red Devils, who have the Champions League places back in sight. The new football year begins for United, on Monday 3 January at 6.30pm against Wolves. Burnley, who remain deep in the relegation battle but have a few more games to play than their rivals, host relegation rivals Leeds the day before.