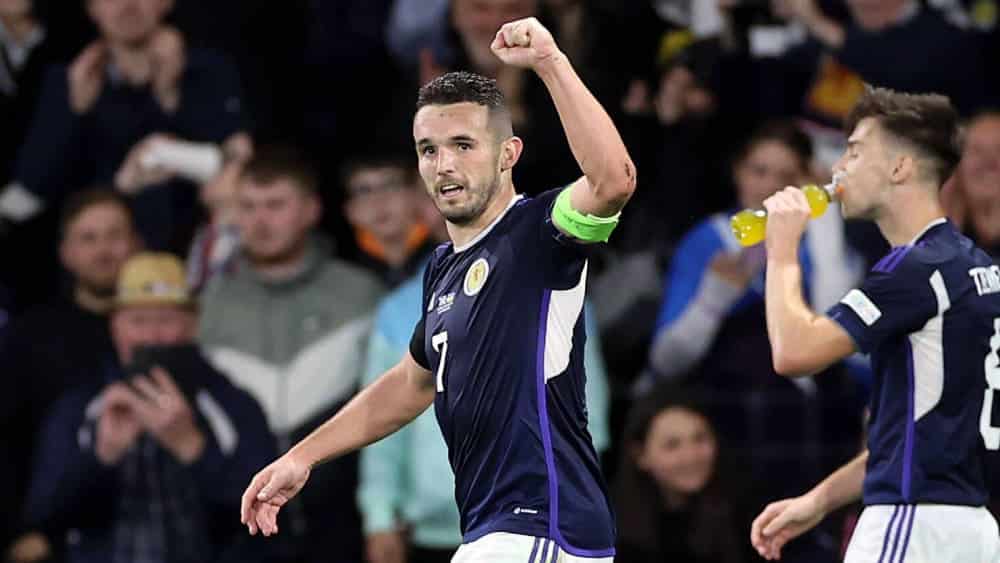 Scotland took a step towards winning League B Group 1 at home to Ukraine thanks to a 3-0 win.

While Scotland coach Steve Clark made three changes from the last Nations League match (4-1 in Armenia) – McKenna, Tierney and Christie came in for Hanley, Taylor and Gilmour – Ukraine’s Oleksandr Petrakov made six changes from the 1-1 draw with Ireland in mid-June. Arsenal player Zinchenko (calf blister) was among those missing. New to the starting eleven was, among others, Mudryk, whose move to Bayer Leverkusen in the summer did not materialise.

Only one chance – Patterson injured

Only at the beginning Ukraine presented themselves a bit more peppy. Then, however, the Scots quickly got into the game better – because they developed a little more drive to the goal and at least sporadically also got a shot on target. The best chance of the first half came from Armstrong, whose shot was saved by Trubin (22nd). Unfortunately for the home side, Everton’s Patterson was forced off in the 26th minute with a left knee injury. Hickey came into the game.

There was, however, one excitement in the first half. Bondar cleared Adams, who was heading for goal, with a rustic check shortly before half-time. Both players had to be treated afterwards, Bondar saw the yellow card (45.).

After the restart it was all Scots as they created more and more chances against the too passive Ukrainians. Armstrong and Adams failed with their attempts at Trubin (59., 64.), seconds before the first attempt Adams had hit the bottom of the crossbar with his head (64.). But then it was time. In the 70th minute, with the luck of the brave, the ball came to McGinn, who shot in flat to make it 1-0.

After that, things continued to go in the direction of the Ukrainian goal. A co-production between Dykes and Fraser put the Scots 2-0 up in the 80th minute, Dykes heading home a corner from the left. Curiously, a few minutes later the 3-0 score was almost a repeat of the second Scottish goal. Fraser gave a corner from the left to the inside, Dykes rose highest and scored again into the right corner for the final score.

Scotland, who now top Group 1 in League B of the Nations League ahead of Ukraine, play Ireland again at home next Saturday (8.45pm). For Ukraine, it’s on to Armenia a few hours earlier (3pm).