HomeMotorsports"Certainly not a piece of cake": Marcel Schrötter fourth at home race
Motorsports

“Certainly not a piece of cake”: Marcel Schrötter fourth at home race 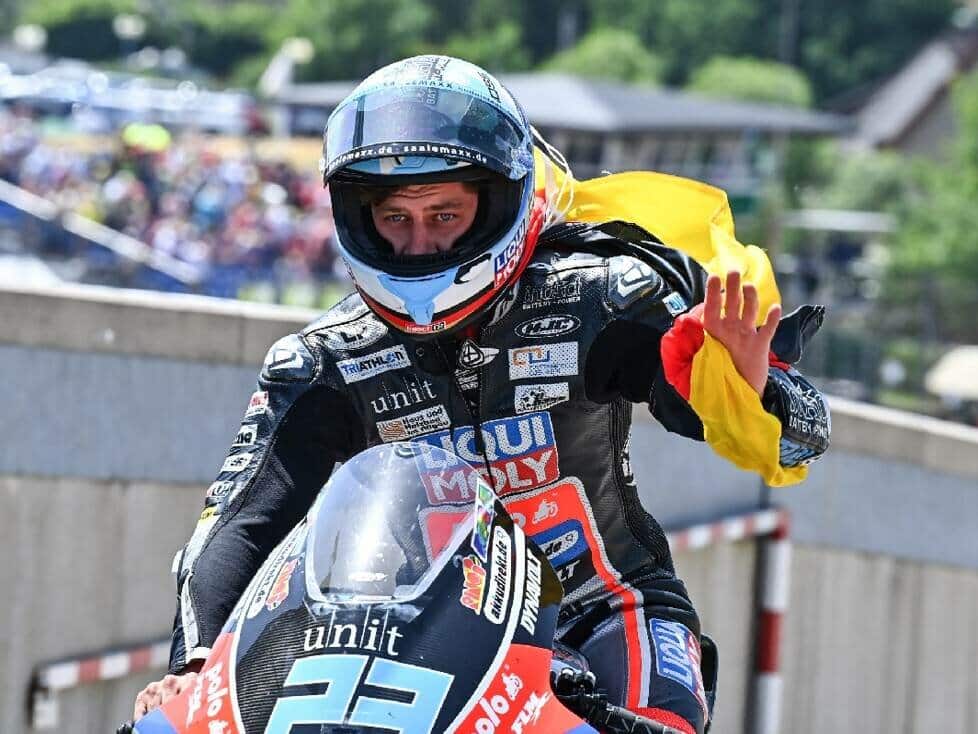 Marcel Schrötter admits: He felt the pressure before the Moto2 race at the Sachsenring – Even though he narrowly missed the podium, the German is satisfied

Although Moto2 rider Marcel Schrötter narrowly missed the podium at his home Grand Prix the Sachsenring. But for his fourth place he was celebrated by the fans like after a victory. And Schrötter himself was also able to quickly put aside his disappointment at missing out on the podium.

“After the first breath, the joy about this fourth place is great,” said the German. “At first, however, the disappointment about missing the podium prevailed, which I think is normal. But we have to take the positives from this beautiful weekend, and that includes the race result.”

In the end, the Intact GP rider was just 0.115 seconds off third place. From fifth on the grid – the best qualifying result of his season – Schrötter surged ahead right at the start and initially lined up second, but dropped back to fourth over the course of the first few laps and finished there.

Another step towards Top 3

In the end Schrötter had a duel with Sam Lowes, but had to admit defeat. “We showed good performances over the three days,” he sums up with satisfaction, admitting, “It’s certainly no piece of cake to meet all the expectations.”

“That’s no excuse, but when I’m the only one who has the potential to fight at the front, there’s a certain pressure on you. We also had to get Saturday right first, which we haven’t managed to do much of this year,” he said, addressing his problems in qualifying.

But this time he managed to get on the first two rows of the grid. “And then to have a solid race, I think that was fine. I gave my best from start to finish. Still, I would have liked to be on the podium. But we took another step towards the top three. “

“We have to take this momentum into the next race weekend and then maintain it after the summer break. I’ve felt for a while that we can fight into this range in every race and then a lot more is possible.”

Schrötter describes the race itself as “one of the most exhausting ever” – also, but not only because of the high temperatures. “It was incredibly difficult to ride, I was in danger of crashing in almost every corner. It was therefore extremely difficult to make up lost ground,” explained the fourth-placed rider.

“On top of that, there were several slides where I kept losing the connection,” he continues. “Everything together, including the heat, made it difficult to find a way to get closer to my front runners bit by bit. “

But because Pedro Acosta and Sam Lowes were also increasingly struggling and also dueling, Schrötter was able to catch up and even briefly pass Lowes. “Unfortunately I had problems with my left foot myself, which is why I made a small mistake once in the penultimate corner.”

Although the German was still able to save the situation and prevent a crash, he lost the third place he had just conquered back to Lowes. “After that I had no chance to launch another attack.” So a home podium was denied in the end. Nevertheless, Schrötter sees the positive above all.

“Fourth place again brought a lot of important points for the championship, where everything is getting closer and closer together.” There, Schrötter is now in seventh place with 88 points, 45 points behind World Championship leader Celestino Vietti. “We’ll take that with us and I’m already looking forward to Assen, where we’ll attack again. “

“But first a big thank you to the whole team and the great crowd. It was unbelievable fun to race here again in front of a full house,” the Moto2 rider praised the fans at the Sachsenring. 232,202 spectators came on three days.

P4 for the home hero

It was a special weekend for the IntactGP team as well. Team manager Jürgen Lingg was satisfied with Schrötter’s performance: “He delivered a strong performance on all three days, even if we stumbled briefly in FT3.” Because Schrötter missed the Q2 direct entry.

“But we made up for it cleanly in qualifying and secured the second row of the grid. That was a good prerequisite for the race,” said Lingg. “The race itself was just wonderful to watch. You could see from the start, when Marcel came out of the first corner in second place, that he was going to fight.”

“And he did, until the last metre. He had very strong opponents in the direct duel. Those were great fights and you also noticed that everyone was absolutely at the limit. I really liked the fact that Marcel kept it all in. It can go on like this. In the end, we were only three tenths off P2. “