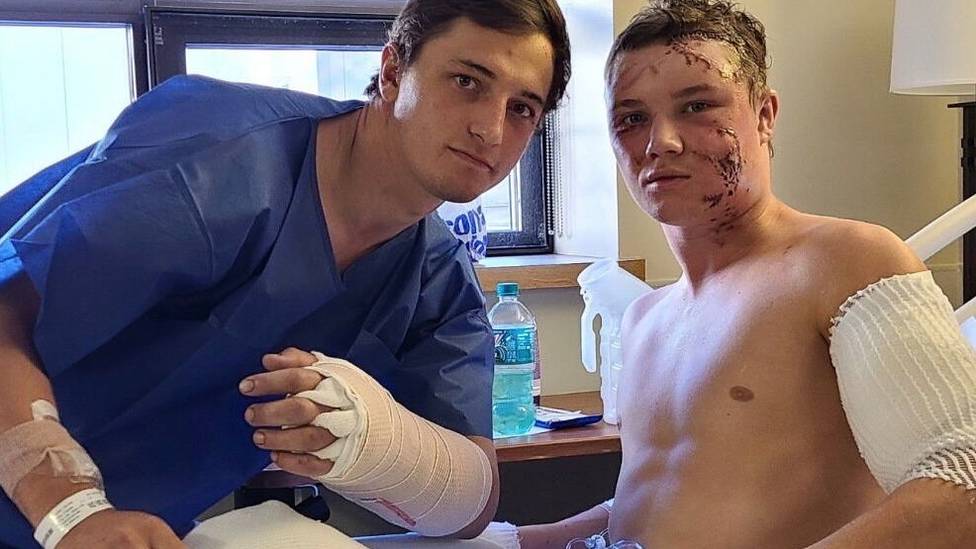 Two college wrestlers become victims of a grizzly bear attack in the United States. A fight to the death for the young athletes

This story could have ended very differently! Two college wrestlers from the US state of Wyoming survived an attack by a grizzly bear last weekend.

Teammates Kendell Cummings and Brayden Lowry spoke to ABC News about the horror encounter that occurred in the Shoshone National Forest.

In the interview, Lowry described being attacked by the animal first. “The bear came running out of the trees. I didn’t see it until it was right in front of me – even though I heard a crash beforehand. All I could do was scream, ‘Bear! Bear!’ I just knew I had to protect my head and somehow fight for my life, it was a matter of life and death. “

Cummings, on the other hand, who could have fled during the attack, tried everything to fight off the bear. “I didn’t want to lose my friend. It was bad. There was a big bear on him. I could have run away and possibly lost a friend – or freed him and saved him,” the athlete said.

His rescue was far from easy, however. Cummings kicked the predator and pulled at its fur, promptly the bear attacked him too. “He pushed me to the ground and then pushed me with his head on the ground and against the trees. There he then attacked me. Immediately, I put my hands in his mouth so he couldn’t go for my neck,” the wrestler recalled.

For a short time, the animal disappeared as a result, but came back. After the second attack, Lowry, who was attacked first, managed to run to an area with mobile phone reception and call 911.

Other college wrestlers carried the badly injured Cummings from the scene of the attack towards civilisation, Lowry meanwhile was able to walk independently.

Both were later hospitalised with a myriad of injuries, but were fortunate. Lowry broke his arm and suffered various wounds, but rescuer Cummings required surgery. His head in particular was affected by the attack. Fortunately, nothing stands in the way of a complete recovery.

In the meantime, the college of the two has also reacted and started a fundraising campaign in order to be able to pay the high hospital bills.