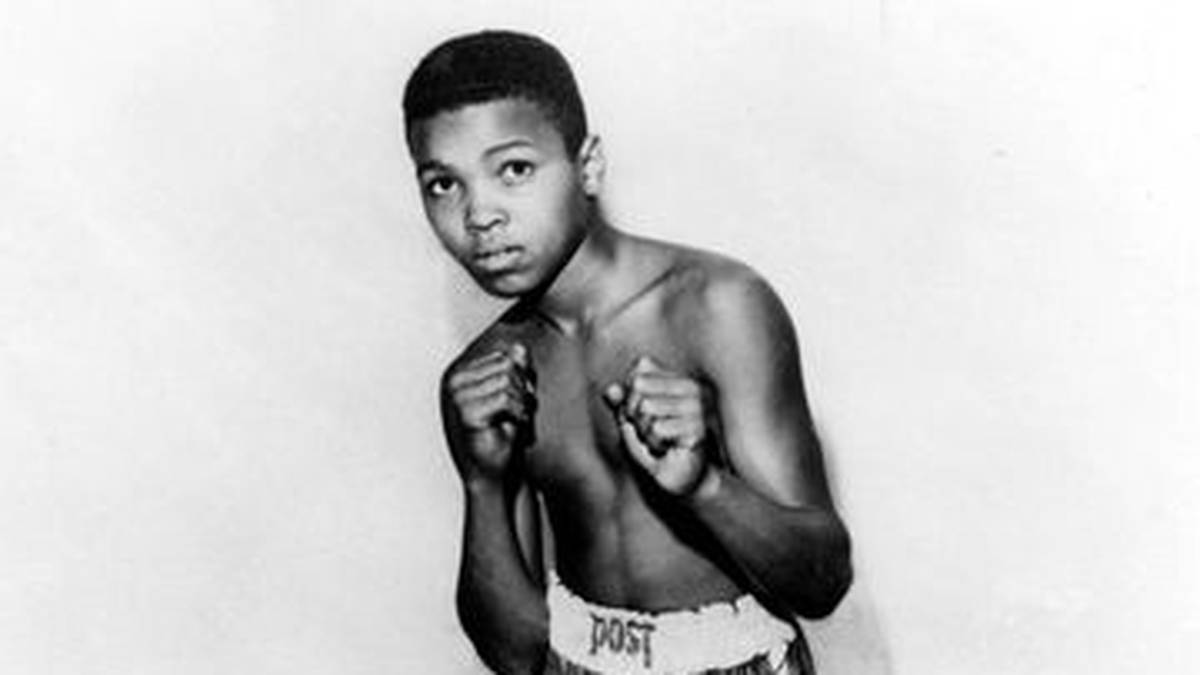 Muhammad Ali was remembered as the sportsman of the century. The beginning of his great career is now 61 years ago.

Muhammad Ali became heavyweight world champion of all federations three times, immortalised himself with legendary fights against Sonny Liston, Joe Frazier and George Foreman, as a word poet (“float like a butterfly, sting like a bee”) and pop culture icon, as a political campaigner for civil rights – who also put up with momentous controversies.

On 3 June 2016, Ali died at the age of 74, after his late life had been overshadowed for decades by Parkinson’s disease – which was, by all accounts, a late effect of his spectacular ring performances.

Ali born Cassius Marcellus Clay Jr. in Louisville, Kentucky on 17 January 1942 – named after a 19th century politician and anti-slavery activist. His father was a sign painter and the son grew up in poor circumstances. His boxing career began when he signed up for his first training session in 1954 – out of anger because his bicycle had been stolen.

His frustration with injustice in times of racial segregation between whites and African-Americans still in force in the USA was already a driving force for the young Clay: the racist murder of teenager Emmett Till in 1955 led him to vandalise a local train station together with a friend.

In 1958, Clay left school – because of poor grades, but also because he wanted to concentrate on boxing. On 5 September 1960, he became Olympic champion in Rome and thus established the beginning of a global sports myth.

He defeated the Pole Zbigniew Pietrzykowski in the light heavyweight final and turned professional in the same year. He fought his first professional fight less than two months later – on 29 October 1960.

1964: The sensation against Sonny Liston

1964 the then 22-year-old got his big chance. After 19 wins in a row, he faced world champion Sonny Liston – and drew attention to himself in advance.

Clay repeatedly called Liston an “ugly bear”, once even stood in front of Liston’s house with a bus labelled “The most colourful fighter in the world” and sounded off: “Liston is good, but after eight rounds he falls.”

Provocation was part of Clay’s concept, he had copied it from wrestling, among other things – the “Gorgeous” George Wagner, who was the head villain of the show-fighting world at the time, was a declared source of inspiration for Clay.

At the time, many observers doubted that there was anything behind Clay’s big mouth: of 46 experts, 43 predicted Liston before the first big fight.

Clay, however, succeeded in what the great Joe Louis called “the greatest sensation in boxing history”: the young star prancing around the ring had already worn down the champion after six rounds, Liston gave up humiliated.


Noteworthy: By all accounts Liston had resorted to an unfair trick and had prepared his gloves with a substance that made Clay’s eyes burn. “Cut my gloves,” Clay shouted at his legendary trainer Angelo Dundee just before his triumph.

He was all the more confident afterwards: “I’m the best fighter of all time. And just 22. I must be the greatest. I’m the king of the world. I am beautiful. “

Two days later, the new champion demonstrated that he was about more than showy self-dramatisation: he announced his conversion to Islam, no longer wanting to be called Cassius Clay (“That’s a slave name”). Muhammad Ali was officially born – and soon put the next exclamation mark on it.

In 1965, he had his rematch against Liston, who was hit with the “Phantom Punch” after 105 seconds, an inconspicuous blow to the temple or jaw that was hardly noticed by the audience. The scene afterwards, on the other hand, will be remembered for centuries. The moment, captured by photographer Neil Leifer, when the world champion asked the knocked-out Liston to get back up, became the quintessential Ali image (rumours that the fight had been fixed were never confirmed).

Ali defended the title eight more times, including against former champion Floyd Patterson and German Karl Mildenberger, who died in 2018 – before sending the next big political message.

He refused the military service Ali should have done – citing his faith and political beliefs that opposed the controversial US war in Vietnam (“I will not help murder another poor nation 10,000 miles from home just to help secure the domination of white slave masters over the darker peoples of the world”).

The consequence: Ali was sentenced to five years in prison – though he remained free on bail. His boxing licence was revoked, however, and his world title was gone. Three years of his career blossom were taken away from him.

“He renounced fame, millions of dollars, to stand up for what his consciousness advised him to do,” the civil rights activist Martin Luther King paid tribute to him (though Ali, as part of the “Nation of Islam”, was closer to the more radical Malcolm X).

Meanwhile, the undefeated “Smokin'” Joe Frazier took the world title. When Ali returned, it came to a great duel between two undefeated world champions, crowned and uncrowned – the “Fight of the Century. “

In New York’s Madison Square Garden in 1971, the unprecedented spectacle took place, which was also enormously politically charged. Frazier was considered a “good black man” in the still-divisive United States, the rebellious Ali a “non-patriot”. Ali fuelled the controversy by calling Frazier a submissive “Uncle Tom” – something he resented for decades. On the evening of the fight, riots broke out in many cities.

Frazier was the better man in the ring this time, even knocking Ali down in the 15th round (one of three knockdowns in Ali’s career) and winning on points.

1974: Ali cracks George Foreman in “Rumble in the Jungle “

For three years Ali had to wait for his next chance at the throne, meanwhile boxing against opponents such as Ken Norton (one defeat, victory in the rematch), Patterson and the German Jürgen Blin – then came the legendary “Rumble in the Jungle” against George Foreman, who in the meantime had dethroned Frazier as world champion.

The world championship fight, arranged by the notorious promoter Don King, took place in front of more than 100,000 spectators in Kinshasa/Zaire and became the biggest sporting event in the history of Africa (and welcome propaganda for the dictator Mobutu Sese Seko).


Ali went into the fight as a clear underdog, the seven years younger Foreman was considered an unbeatable fighting machine. But “Big George” hadn’t reckoned with what Ali had up his sleeve.

In the early rounds, Ali surprised Foreman by “roping a dope”. Foreman was dishing it out while Ali was absorbing the furious punches on the ropes and kept asking his opponent, “Is that all, George?” Foreman was not used to long fights, Ali kept throwing impact punches from cover.

At the end of the eighth round, Ali risked everything: two left-right combinations felled Foreman, Ali was world champion again, seven years after he had been stripped of the title. As the second boxer after Patterson, he disproved the unwritten boxing law “They never come back”.

The memorable event went down not only in sporting history but also in cultural history, was processed in the song “In Zaire” by Johnny Wakelin and in the documentary “When we were Kings”, and was also the dramatic climax in Michael Mann’s feature film “Ali” with Will Smith in 2001.

1975: Consequential “Thrilla in Manila” against Frazier

A year after his second World Cup coup, Ali followed up his rivalry with Frazier, again in a memorable setting: the “Thrilla in Manila” in the Philippines.

After a brutal and gruelling fight in an un-air-conditioned hall, Frazier’s trainer Eddie Futch threw in the towel in the 15th round, fearing for Frazier’s life, according to his own account.

Ali was also badly affected and collapsed after the fight with a circulatory collapse. He had taken 440 hits, most of them to the head. The suicidal performance is widely seen as a cause of his later suffering from degenerative Parkinson’s disease – as was Ali’s spectacular but health-risky fighting style in general.

“Every punch I’ve taken from him is a step on the road to my grave,” Ali later wrote of Frazier in his biography “The Greatest. “

After the “Thrilla” Ali climbed the ring ten more times – among others also in Munich – and after an interim defeat against Leon Spinks, who died that year, he also regained the world championship crown a second time – nevertheless he never reached his old performance level again.

In 1980, Ali lost his last world championship fight to the up-and-coming Larry Holmes, and after a humiliating defeat at the hands of Jamaican Trevor Berbick (whom the young Mike Tyson was later to dethrone as world champion), Ali called it a day in 1981. The disease seemed to have taken hold of him by then.

In 1984, Ali received the drastic diagnosis and withdrew more and more from the public eye. He gave the world one last goosebump moment in 1996 when he – already visibly marked – lit the Olympic flame before the Games in Atlanta. In 1999, the International Olympic Committee (IOC) voted him the Sportsman of the Century.


Ali – whose daughter Laila Ali followed him into the ring in 1999 – died on 3 June 2016, cause of death septic shock after being admitted to a hospital in Scottsdale, Arizona for breathing problems. He remained a powerful political voice until the end, taking a stand against Donald Trump in the 2016 election campaign.