10:0-Scoring Festival in San Marino: Kane and England storm to the World Cup 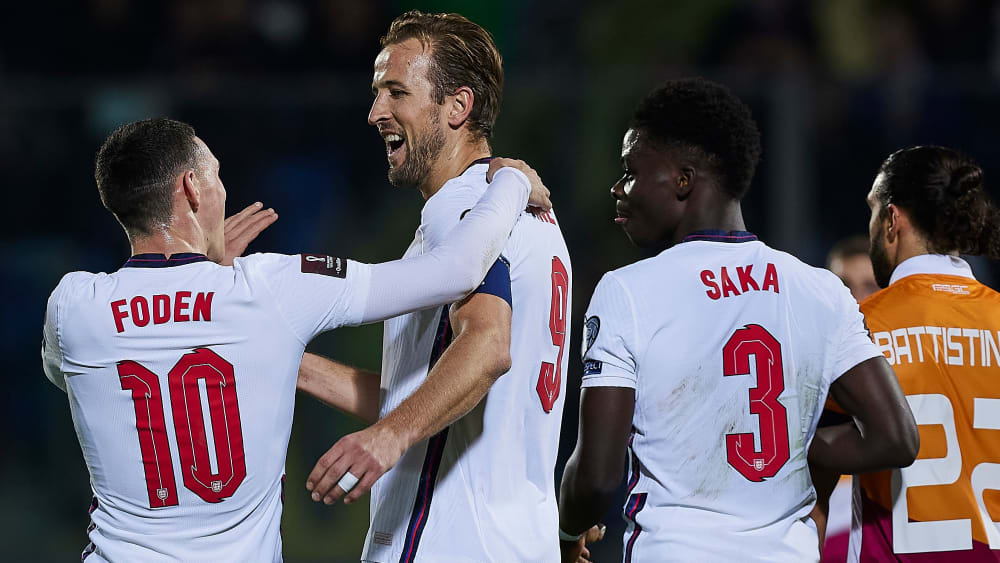 With a 10:0-scoring festival in San Marino, England qualified for the World Cup 2022 in Qatar Kane in particular was in a scoring mood with four goals in one half

England coach Gareth Southgate made many changes compared to the 5-0 win over Albania Among others, Dortmund’s Bellingham and Smith Rowe, who started from the beginning in his second international match, were new to the squad. Still in the starting eleven: Hatrick goalscorer Kane. The Three Lions were almost certain to qualify for the World Cup before the game, but still needed one more point for mathematical clarity.

No “ear cheer” from Maguire

The roles before the duel were of course overwhelmingly clear – and that’s exactly how the game went. It only took six minutes for the favourites to take the lead through a Maguire header. In contrast to the Albania game, the defensive man left out the “ear-cheering” for which there was some criticism. Only the Three Lions played and they took a 2-0 lead in the 15th minute after an own goal by Fabbri, the home player had deflected Saka’s shot.

San Marino of course couldn’t keep up with the big favourites, at least there was a finish from Nanni for which there was mighty applause, but Ramsdale was on hand (33rd). Otherwise, only England played, who got a hand penalty, because Rossi got the ball on the hand of the “reclamation arm”. Kane converted centrally (27.).

The attacker was really hot before half-time: First he marked the 4:0 (31.), then the Spurs striker added the 5:0 by penalty (handball of D’Addario) (39.) and laced a flawless hat-trick as already against Albania. But that was not enough in the first half: Kane scored a fourth time (42nd) to make it 6-0 at half-time and had scored four goals in the space of 15 minutes.

Kane also set a new record: he had scored 13 goals for England this calendar year – no one else had done that. Before that, three players managed to score twelve goals in one year: George Hilsdon (1908), Dixie Dean (1927) and Kane (2019). Moreover, with 48 goals for England, Kane is now joint third on his country’s all-time goalscoring list with Gary Lineker. Ahead of them are Sir Bobby Charlton (49 goals) and Wayne Rooney (52 goals).

Premiere for Smith-Rowe – England at the World Cup

After the break, England took it easy. But there were still chances: Abraham missed a great opportunity (56th) before he passed perfectly to Smith Rowe, who scored his first international goal (58th). It was already a clear affair – and from the 68th minute and the traffic light card against Rossi, San Marino was also a man down.

The English used their superior number of players to score three more goals: Mings scored with a beautiful header (69th), Abraham scored from a turn (78th), and Saka made it 10-0 with a header from a few metres (79th). At 8:0, a goal by Bellingham had been taken back because Abraham had committed a foul beforehand. The Three Lions booked their ticket to the 2022 World Cup in Qatar with this resounding victory. The English finish Group I with 26 points and undefeated in first place.