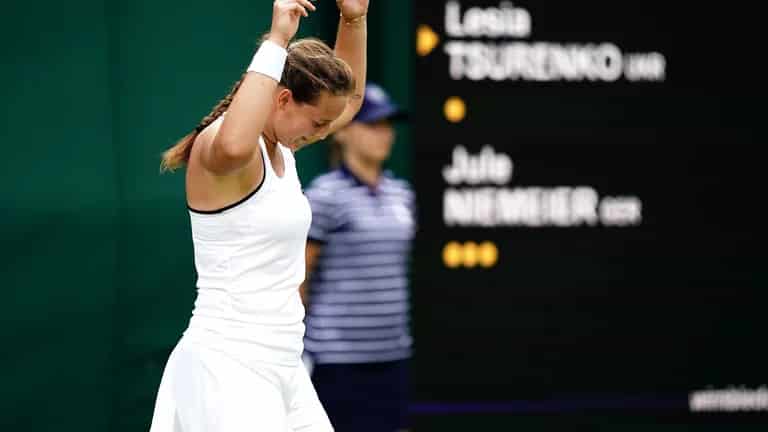 Amid her own disappointment at the third-round exit, the 2018 winner was at least pleased with the two German tennis surprises at the grass-court classic. “They found a good rhythm, found their game on grass,” Kerber said after her own 4-6, 5-7 loss to Belgium’s Elise Mertens. “Both of them have nothing to lose, try to enjoy it as much as they can, play their game.”

Niemeier and Maria’s path to their respective first round of 16 at a Grand Slam tournament could hardly be more different. For 22-year-old Niemeier, it is her second Grand Slam tournament, while Maria, who is twelve years older, is making her 35th appearance at one of the four major tournaments.

For Maria, success is also a family business. Husband and coach Charles Edouard threw kisses on her hands after her 6-3, 7-5 win over world number five Maria Sakkari of Greece. “He is great. Without him this wouldn’t be possible, he believes in me every second, he gives me confidence. I wouldn’t be here without him,” Maria enthused.

Her two daughters, eight-year-old Charlotte and 15-month-old Cecilia, are also at the tournament and in childcare at the training ground during matches. “I think they are jumping up and down in front of the TV,” Maria said with a smile.

Niemeier was joined on court by her mother and brother as the German tennis hope defeated Ukrainian Lessia Zurenko 6-4, 3-6, 6-3 in a thriller of nerves, confirming her previous success against world number three Anett Kontaveit of Estonia. “That’s the next step, that you win matches when you don’t show your best tennis,” Niemeier said of her performance.

In the next round, the Dortmund player can probably look forward to a match on one of the bigger courts against Heather Watson from Great Britain and is by no means an underdog. For Maria, after the world-class player Sakkari, the next tough task lies ahead in Latvian Jelena Ostapenko. And should both continue their fairytale run at Wimbledon, there would be a German quarter-final at the grass-court classic.