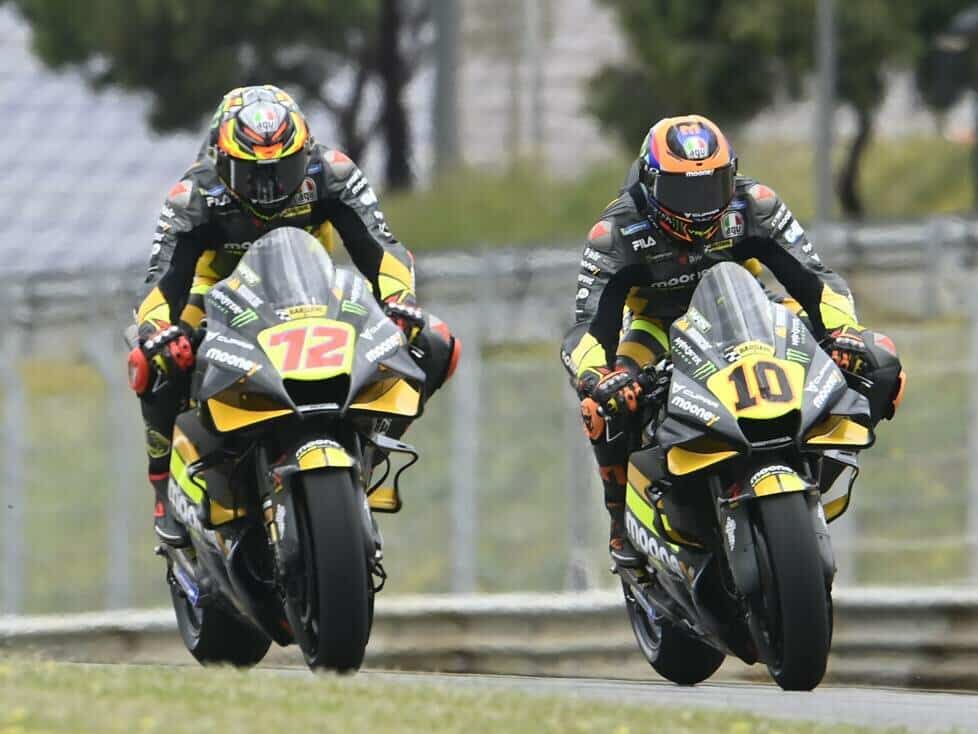 It was no surprise. Between the Misano and Aragon races, VR46 confirmed that Luca Marini and Marco Bezzecchi will continue to ride for the team in 2023. Both will receive the Ducati Desmosedici GP22 next year.

Bezzecchi claimed the first podium finish for VR46 in MotoGP in second place at Assen. The Italian is well on his way to becoming the best rookie of the year. Marini is still waiting for his first podium. Two fourth places are his best results.

Remarkably, Marini has seen the chequered flag in all MotoGP races in almost two full years. After 15 races, VR46 is eighth in the team standings, ahead of the Honda factory team.

“It was not a surprise,” says Marini about the official contract extension. “It was clear before the season started. This year I have found what I need with the people I work with in the team. Everything is going very well.”

“We are growing together. Not only me, but we as a team. There have been a lot of good moments. We also eat together and spend a lot of time together. It’s always a pleasure to be in the paddock and it’s fun to work with this crew. “

While Bezzecchi will move from GP21 to GP22 in 2023, Marini will continue with his technical package. Is that a disadvantage? Or is it even an advantage, as he will have an optimal technical package at the start of the season and could be in the mix at the front of the field?

Enea Bastianini showed at the beginning of the season that he can win with last year’s model against the newer Ducati version. In spring, Ducati first had to find the optimal set-up for the latest Desmosedici.

“I hope Ducati won’t make the same mistake as this year and the new bike will be perfect. But that would not be good for me,” Marini laughs. “But I think I have a good potential. “

“Another year with the same crew and the same bike is a good starting point. Then we have to improve at every Grand Prix. But we have to wait and see how the other manufacturers work. Suzuki is away and Honda has problems. “

Marini: The Ducati GP22 is “perfect “

Can Ducati actually improve the GP22? Are there any weaknesses? “Difficult because the package is very strong in every situation,” muses Marini. “I can’t say to Gigi [Dall’Igna] that I need more here or there. As I said, the package is at 100 per cent everywhere. “

“The feeling is very good, the grip level is good, turning is also good now. The aerodynamics are very interesting. We need a bit more speed on the straights. But Ducati has enough experience and knows how to build a very strong engine.”

“A little more speed can help with overtaking and defending. But otherwise our bike is perfect.” At Aragon, Ducati won the Constructors’ Championship for the third year in a row.

Bezzecchi also emphasises continuity: “For me it is important that I continue with the same crew. My team will remain completely the same. That is very important because I have a very good relationship with everyone. I like this feeling when I come to the track. “

“Luca and I know each other very well. We were teammates in Moto2. He has always been my best teammate. We work very well together and also have a very good relationship. In MotoGP the competition is higher, but we’ve never had a problem so far.”

Thanks to his consistency, Marini has collected more points than Bezzecchi. Was “Bez” able to learn from his teammate in his rookie season? “Yes, of course. I always look at his data. We have a similar riding style. That’s why I can copy something from him and he from me.”

The fact that Bezzecchi will also have last year’s model at his disposal next season does not bother him. He thinks the approach is right: “I think Ducati’s philosophy is very good. They want you to learn. When you learn, you get updates. I think that’s okay. “