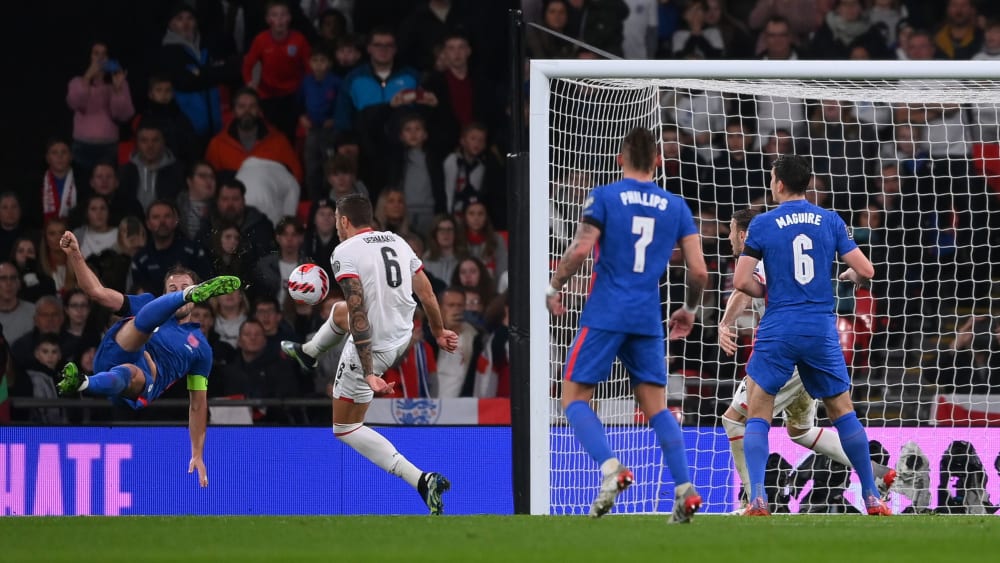 England’s ticket to the World Cup 2022 is as good as secured. On Friday, the Three Lions swept Albania out of the stadium 5-0 thanks to a strong first half – outstanding man of the evening: Harry Kane

The highlight of the match came just before half-time. It was already 4:0 for England against completely overmatched Albanians. After a corner from the right, Kane was in the air and took a side-footed shot – which was slightly deflected to make it 5-0. A great moment on this evening in London.

The English made it clear early on which way the game was going to go, Maguire heading in the 1-0 as early as the ninth minute. Not long after, the home side were in danger once in half one, but after Walker’s disaster pass, Uzuni failed alone in front of Pickford (14th).

After that, it was all England. Henderson’s cross was headed in by Kane for 2-0 (18th) before Henderson made it 3-0 after a one-two with Kane (28th). The Three Lions played a good first half, but that was also due to the fact that Albania were completely out of their depth defensively. Kane scored a brace from an acute angle after an assist from Sterling (42nd), before scoring a dream goal to make it 5-0 at the break.

It takes a point in San Marino

In the second 45 minutes, England took it much easier. After 63 minutes, three-pointer Kane also had his day off, Abraham came on for him. The Albanians were only concerned that it didn’t get any worse. And it didn’t. After an uneventful second half, the score remained 5-0.


The English are not yet guaranteed qualification for the 2022 World Cup in Qatar, but they will not lose any more points. The Three Lions have three points more than Poland and a goal difference that is six goals better. On the last matchday, they play San Marino (0 points, only one goal), where one point will be enough.