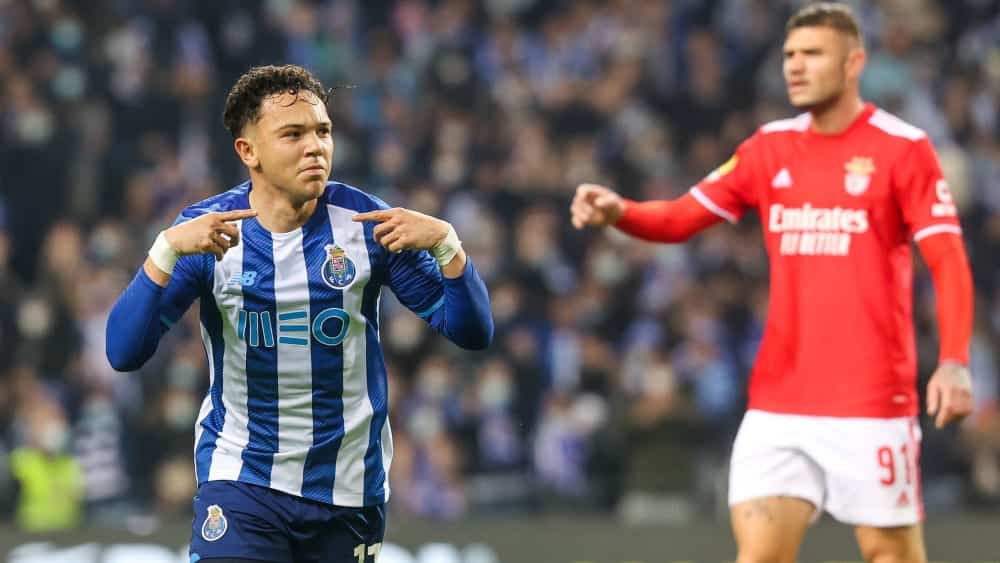 FC Porto won their second game in a week against Benfica Lisbon. In the 3-1 win, the hosts were particularly convincing in the first half and benefited from a sending off.


The two sides had already met in the Portuguese Cup a week ago, and after the 3-0 win for Porto there was even a cutback at Benfica: coach Jorge Jesus was sacked, and for the time being Nelson Verissimo is taking charge of the team led by Julian Weigl.

Disturbed Porto set up for a double strike

Despite a different coach, the visitors had little to show for their efforts in the first half. They were already behind after 22 minutes, but Porto’s Pepê’s goal was disallowed for offside, which was also confirmed by the VAR. In a rather quiet encounter, the home side did manage to make it 1-0: by chance, the ball landed in the hands of Fabio Vieira, who did not allow himself to be robbed of his chance in the penalty area (34th). Only three minutes later, Porto went even higher, as Pepê was allowed to nod in undisturbed in the penalty area (37.).

Benfica, on the other hand, only had one good chance in the first half: Yaremchuk missed a reckless shot just before the 0:1 (33.). Immediately after the restart, however, the Ukrainian did better and scored the equaliser (46). But Benfica’s high was not to last long – André Almeida was shown a yellow card after a foul in midfield (49th).

The visitors, however, were generally unimpressed by their shortage. It was hardly noticeable on the pitch. Porto were even outplayed after just over an hour – Zaidu was only able to save for his beaten keeper after Concalo Ramos’ shot just before the line (63rd). Regardless of the extra man, Porto made it 3:1 on the other side: Mehdi Taremi beat Vertonghen to the ball and slotted home (67.)

In the final phase hardly anything happened, Benfica’s tooth was finally pulled out. Thanks to the win, Porto, who have not lost to the Lisbon club in eight competitive games, jumped back to first place. Benfica remain third, but are losing more and more ground to the top clubs Sporting and Porto.