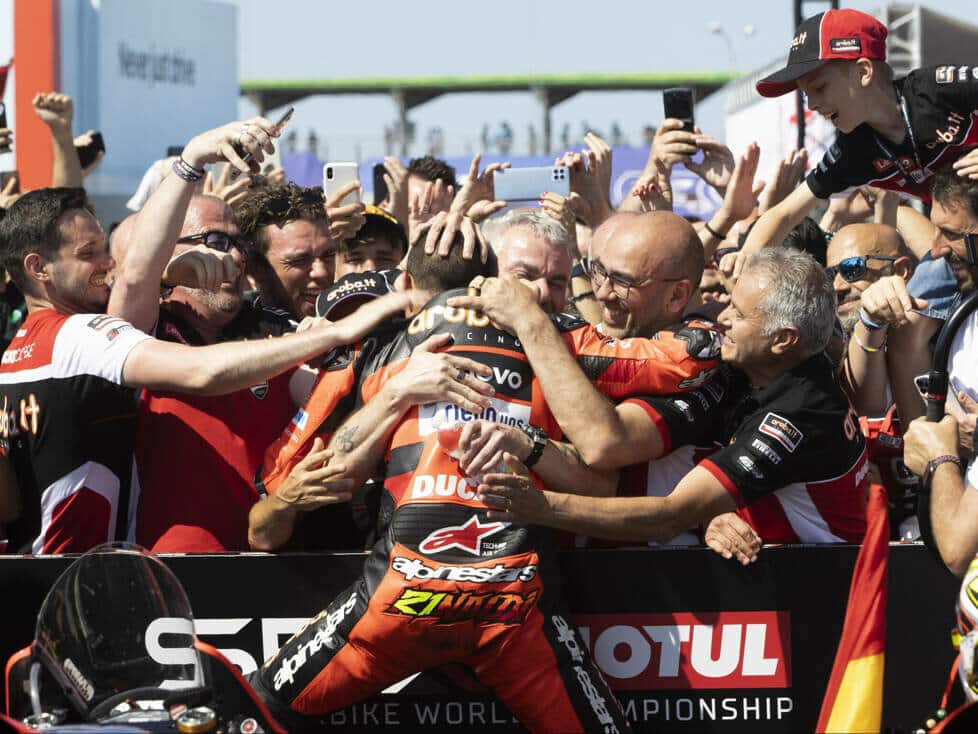 Two podiums at home race: Michael Ruben Rinaldi recommends himself for the future at the World Superbike Championship in Misano and expects consistently good results from now on

Local hero Michael Ruben Rinaldi made it onto the podium in both main races at the World Superbike Championship in Misano. The Ducati rider supported teammate Alvaro Bautista in race two by leaving World Championship rival Jonathan Rea (Kawasaki) behind and taking important points from him. Were the third places enough to convince Ducati to extend his contract?

“Let’s wait and see what happens. But this result helps a lot. I’m very happy,” commented Rinaldi, who experienced difficult times at the weekends in Aragon, Assen and Estoril, but showed a clear upward trend in Misano. Responsible for this is the new way of working with his crew.

Rinaldi already laid the foundations in Estoril. Can he confirm the results of Misano in the coming races? “Absolutely, because things have been going well since the Mugello test. I need a good base and then work on the details. We already knew in Estoril that we were a bit behind. But I wanted to lay the foundation for the future and not just win a few races a year,” he explains.

“I want to be consistent throughout the year. We have a good base now,” the Ducati factory rider enthuses. “The new way of working is working very well. I have strong support from the team and I want to thank everyone. “

However, the weekend in Misano did not go completely smoothly. In the sprint race on Sunday morning, Rinaldi only finished in tenth position. “In the Superpole race there was something wrong with the bike,” mused the Ducati rider.

“I was very annoyed because the bike was working very well with used tyres in the warm-up. I couldn’t push like normal and went a second slower than usual. We actually had a good race pace, but in this race there was a problem,” the Italian wondered.

Fighting race: From tenth on the grid to the podium

Place ten in the Superpole race meant that Rinaldi had to start from row four in the second main race. “In the second race I had to attack very hard from the start. Otherwise I would have lost the connection to the leading group. Once I passed Johnny, I was able to go at my pace. Toprak and Alvaro were too fast for me. But I’m happy with my performance,” he summarised.

Michael Rinaldi clearly decided the duel with record World Champion Jonathan Rea in his favour. “When you see the chance, then you have to give 120 per cent. I saw the chance for a podium and gave everything. I dedicate this podium to my team, the Italian fans and my family,” said the former Superstock Champion.

On Sunday, MotoGP rider Andrea Dovizioso was watching the action at Misano. Dovizioso is a good friend of Rinaldi. Could the former MotoGP runner-up give his compatriot any more tips?

“‘Dovi’ is very intelligent. He said that he doesn’t know the tyres and the bikes and doesn’t give me advice because I’m already on the podium. But when I am struggling, he helps me with his experience. We talk on the phone a lot,” Rinaldi explains and adds: “It made me very proud when I met him after the race. “

Fernando Alonso: Must eliminate the strengths of the competition

Valtteri Bottas: More involved at Alfa Romeo than at Mercedes