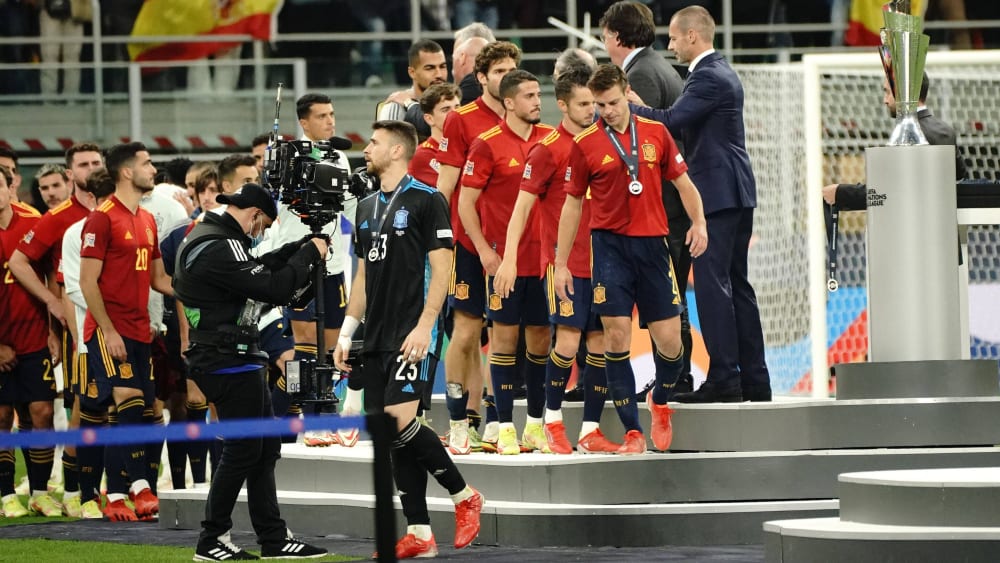 France took over from Portugal in the Nations League on Sunday. While the French were in a party mood, the Spanish felt cheated. The international press…

“L’Équipe”: “Another trophy is coming home. The French federation will have to make some room in its trophy cabinet for this new trophy. It will no doubt not be the most respected or envied title, but France will remain the first nation to win the World Cup, the European Championship and the Nations League.”
“Le Figaro”: “Excitement, emotion, a rediscovered team spirit and individual performances at their peak…. UEFA can thank the French team that won its first Nations League title against Spain on Sunday and is a great ambassador for a competition that the general public hardly knows. “

“Marca”: “They are ruining football. An incomprehensible interpretation of a new and ridiculous offside rule by the video assistant is ruining Spain.”
“AS”: “Without a title, but with a future. With a stroke of genius from Benzema and a controversial goal from Mbappé, France turned around the Nations League final against a great Spain. “

“The Sun”: “Kylian Mbappé scored a controversial offside goal to seal France’s surprise Nations League comeback triumph. The Paris Saint-Germain superstar had been a mere spectator all evening as Didier Deschamps’ side struggled to survive the Spanish inquisition. But just as his country was crying out for inspiration, Mbappé conjured up a priceless 80th-minute winner for the reigning world champions.”
“The Guardian: ‘Perhaps the Nations League is not a bad idea after all. It may not be universally recognised as a real tournament, at least not yet, but it has proved to be a lot of fun. The last four (nations) provided three wild nights in Milan and produced winners who twice had to come from behind to lift an unfamiliar trophy. “

“La Gazzetta dello Sport”: “By beating a young and talented Spain 2-1, France – two years after Portugal’s success in the first edition – entered the golden book of the competition. It won’t erase the disappointment of the European Championship, but it builds up Deschamps, who returns home with a trophy.”
“Corriere dello Sport”: “Deschamps’ national team were rewarded with success over Spain in the final at San Siro. Luis Enrique, however, applauded his players. “