HomeTennisThe next three German players are out
TennisTennis News 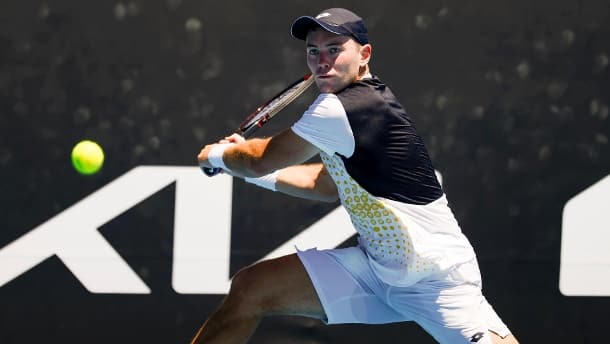 The German ranks at the Australian Open continue to thin out. On Wednesday night, Dominik Koepfer, Oscar Otte and Yannick Hanfmann were the next three German players to be eliminated

Yannick Hanfmann gave “Matador” Rafael Nadal a run for his money, but ultimately missed out on the hoped-for surprise against the tennis superstar at the Australian Open. The 30-year-old from Karlsruhe had to concede defeat to the Spanish Grand Slam record winner in the second round after 2:42 hours with 2:6, 3:6, 4:6 despite a good performance. The German ranks in Melbourne are thus thinning out more and more.

Hanfmann started strongly and kept Nadal under pressure with his net attacks. The world number 126 even created two break chances in the first set – but when the sixth seed from Majorca was challenged, he showed world-class tennis. After a brief period of weakness towards the end of the first set, Hanfmann regained his composure and put up a very respectable fight against the overwhelming favourite, who can crown himself the sole record holder with his 21st Grand Slam title in Melbourne.

Otte and Koepfer had previously failed despite good omens. In his sensational run to the last 16 of the US Open last September, Otte had surprised Sonego with a four-set win in the first round. Koepfer had also started the match with a 3-0 record without losing a set against the 2.11 m tall Opelka, but this time the German number three could not find a way.

Tumult in the stands: Spectator spat at Australian Open?
After show in Melbourne: Tennis star drinks beer from fan
“Escape” through side entrance: Djokovic dives upon return

That leaves only Olympic champion Alexander Zverev (Hamburg/No. 3), who will face Australian John Millman on Wednesday (2nd match after 9.00 am/Eurosport), and veteran Philipp Kohlschreiber (Augsburg) on Thursday with a chance of reaching the third round in Melbourne from a German perspective. All three German participants in the singles had already failed in the first round.