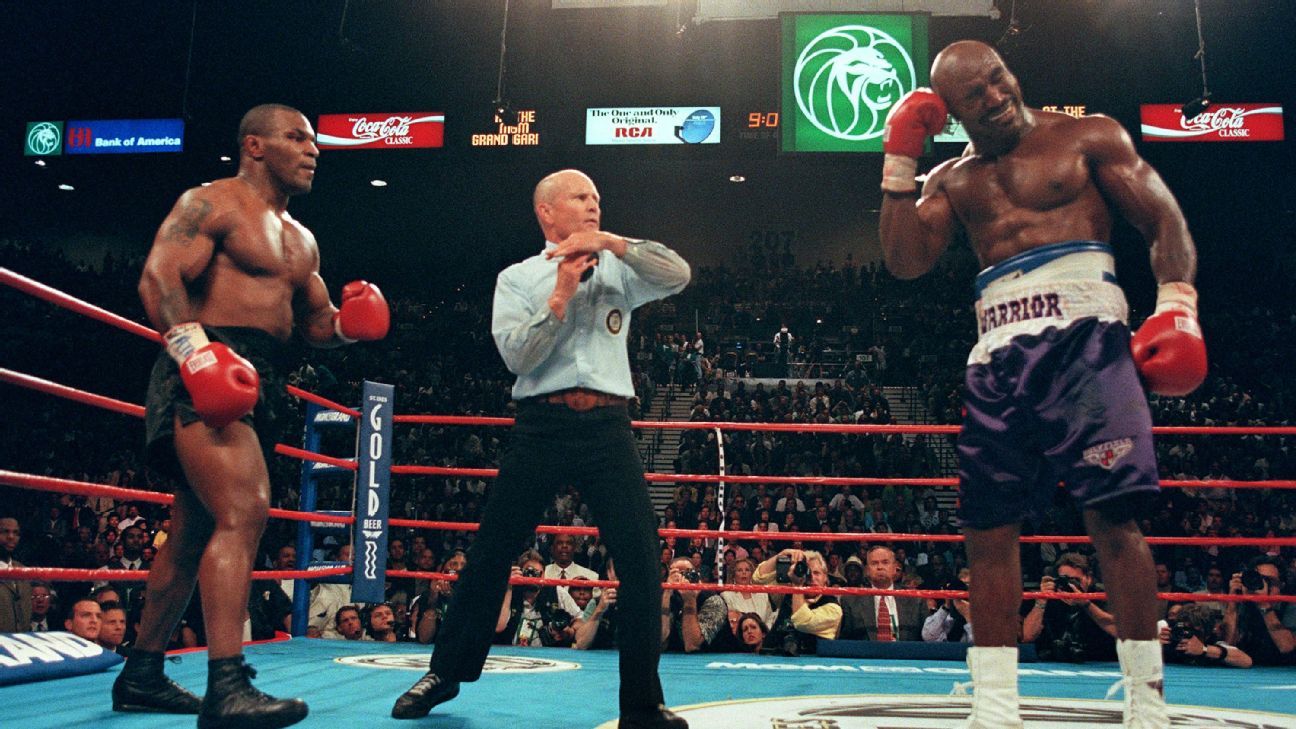 28 June 1997 goes down as one of the most scandalous days in boxing history. Mike Tyson loses his nerve against Evander Holyfield.

Mike Tyson is furious, he is positively fuming. It’s the third round in this highly anticipated fight, and the aging former world champion just can’t find a remedy against Evander Holyfield.

The opponent, although at 34 still almost four years older, is faster, he is more agile, is constantly putting pressure on him. Tyson is sweating, bleeding, clinching. And then it gets outrageous on this 28 June 1997.

“Iron Mike” loses his nerve, in the clinch he bites a 1.5 centimetre long piece out of Holyfield’s ear. Holyfield screams in pain, he bounces around the ring and keeps pointing at his bleeding wound in disbelief. “He did that on purpose, I was sure my ear was off,” Holyfield will say later.

A crowd of 16,331 at Las Vegas’ MGM Grand Hotel is horrified, and riots break out with several people injured. Referee Mills Lane initially tried to calm things down and allowed the round to end. Then he disqualified the ear-biter – whose career was never to recover from the scandal. Especially as it wasn’t his first.

Mike Tyson had first downfall already behind him

In the late 1980s, Tyson was feared as a brutal knockout specialist, becoming the youngest heavyweight champion of all time in 1986 at 20 against Trevor Berbick. The protégé of the legendarily dodgy promoter Don King seemed to have the potential to have an athletic career on the level of Muhammad Ali.

In 1990, however, he suffered an unexpected setback in a sensational defeat to James “Buster” Douglas in Tokyo – and two years later, his first deep fall: Tyson was accused of rape and sentenced to prison, and a fight against Douglas’ defeater Holyfield, which had already been scheduled at that time, was cancelled.


After his release from prison, Douglas made a comeback in 1995, accompanied by gigantic hype, and won the title again in 1996 against the Englishman Frank Bruno.

But it had only seemingly left Tyson seamlessly back to his best, the speed and punching power not the same as before. Holyfield exposed this in his very first fight with Tyson on 9 November 1996 – at the end of which he dethroned “Iron Mike” by 11th round technical knockout.

The rematch broke all money records up to that time, generated 100 million dollars in sales, of which Tyson made 30 million and Holyfield 35 million as a fight purse.

But at the very height of his commercial success, a second defeat to Holyfield threatened to permanently damage Tyson’s sporting nimbus. Tyson’s ear-biting may have been a desperate reaction to this – though he himself claimed that anger at an unpunished headbutt by Holyfield had upset him.

Incredible: Initially Tyson had still wanted to deny his freak out and claimed that a punch had caused the wound. The fitting response from referee legend Lane: “Bullshit. “

One year suspension after biting ear in 1997

Tyson was sentenced to a three-million-dollar fine and an eventual one-year boxing suspension, which he bridged with a well-paid guest appearance for the wrestling league WWE. He got off comparatively lightly, quite obviously the sport didn’t want to send the still-attractive superstar into the forced retirement some critics were calling for.

But the sporting glamour of yesteryear had finally faded after his return. After his comeback fight against Axel Schulz’s former rival Francois Botha in 1999, he didn’t do much, and in 2002 he got his last world championship chance, but was knocked out by Lennox Lewis in the eighth round. In 2005, his career came to an end after defeats against Danny Williams and Kevin McBride, which gave his reputation the rest.

Tyson’s second career, which essentially consists of marketing himself, is running much more successfully again, today the former arch-rivals Tyson and Holyfield are reconciled and even good friends, a later third fight for charity is being discussed.

On a joint appearance on “The Oprah Winfrey Show”, Tyson once said of Holyfield, “I want to tell the world he’s a wonderful kid. It’s a pleasure to know him. “

Tyson cheated out of own story?

The double life of a cult figure