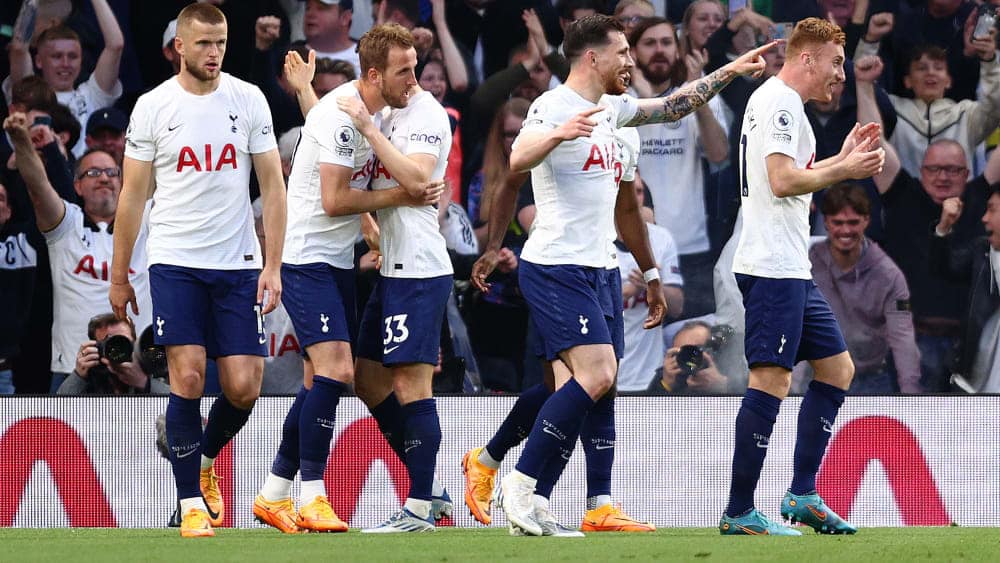 In the derby against Arsenal, Tottenham achieve an important three points in the fight for the Champions League. Only one point separates Spurs from their city rivals in fourth place.


Spurs coach Antonio Conte made one positional change after the 1-1 draw at Liverpool FC, starting Sanchez for Romero in the back three. Arsenal coach Mikel Arteta made no changes from the 2-1 loss to Leeds.

Kane cool from the spot

In a derby that was heated from the start, both teams were immediately aware of what was at stake. Despite a correspondingly intense opening phase, there was initially a lack of goalscoring danger. The first excitement near the goal came after 20 minutes when Son went down in the penalty area against Cedric and referee Paul Tierney pointed to the spot. Kane took the penalty, which was not without controversy, and scored to take the lead (22nd minute).

Holding flies out before the break

Spurs kept the pressure on and in the 33rd minute benefited once again from the clumsiness of the Gunners defence in the person of Holding: after a long ball, he checked Son offside and was sent off with a yellow card. A key scene, which the hosts followed up with the second goal and the third blow for Arsenal through Kane just four minutes later (37.). The Gunners recovered before the break, however, and created their best chance when shorthanded through Nketiah, against whom Lloris secured a 2-0 interval lead (43rd).

Shortly after the break, Son removed all doubt and scored after only 69 seconds to make it 3-0 – his 21st goal of the season – and decide the game. Tottenham then dropped a gear, which gave the visitors the chance to tie the game, which Saka missed (51st). Even in administrative mode, however, Spurs remained the dangerous team and missed a fourth goal on several occasions through Emerson Royal (59th) and Son (63rd).

Fight for the top flight picks up speed

In the final phase, both teams seemed to have agreed on the result. It remained 3-0 to Tottenham, who move to within one point of the Gunners in the top Champions League spot with the win – and celebrated their highest derby win in the Premier League era.

Tottenham can go ahead against Burnley FC at 1pm on Sunday before already-relegated Norwich await on the final matchday. The Gunners travel to Newcastle on Monday (9pm) before a home game against Everton ends the season . With a derby win, Arteta’s side could have secured their first Champions League ticket since 2016/17 – but now it’s back to the wire.