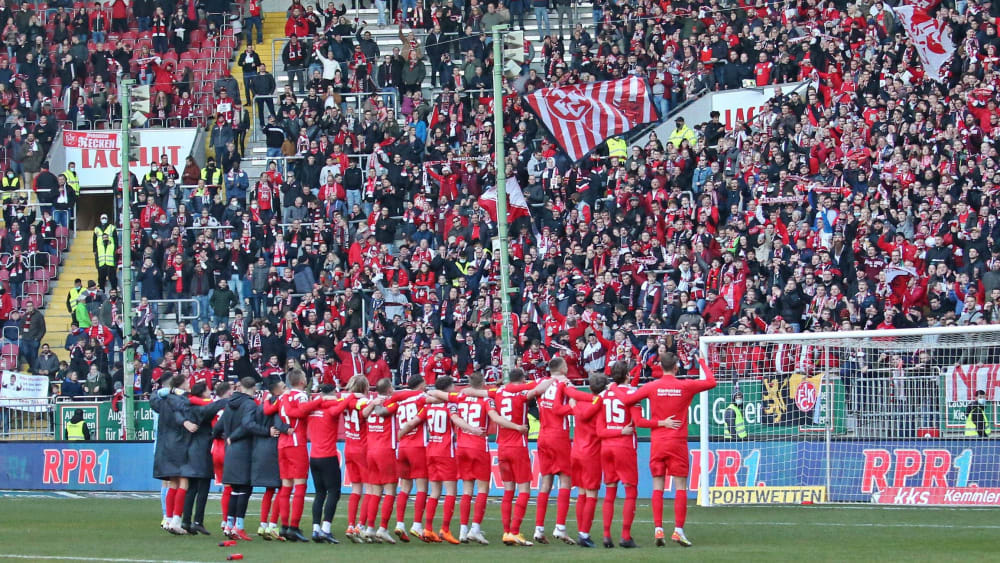 Half of the regular squad was not available to coach Marco Antwerpen at the weekend. But FCK played the trump card of their squad and marched on towards the promotion places.

Other coaches might have had despair written all over their faces – not Marco Antwerpen. He even seemed to enjoy the predicament in the end. “We took it as a challenge and had a great atmosphere in the final training session on Friday. I have to say that it was a lot of fun today to send a team out onto the pitch that hardly anyone expected, said the 50-year-old after the 1-0 win over SV Wehen Wiesbaden.

With goalkeeper Matheo Raab, Kevin Kraus, Philipp Hercher, Jean Zimmer and Muhammed Kiprit, five potential starters were missing due to flu or corona infections. With René Klingenburg (torn muscle fibre) and Felix Götze (initially on the bench after an infection), the health situation of two other key players exacerbated the personnel situation. But it is precisely when everything is going against FCK that the Palatinate team defies all odds this season. The draw in the derby against Mannheim was the first strong proof of the commitment and morale of the team, the second proof followed on Saturday.

The big advantage over the competition

But it is also the luxury of the wide squad that Antwerp can call on. The second guard of the four-time German champions almost all have the potential to be top performers in the 3rd division – not many competitors can claim the same. Nevertheless, it is remarkable how the coaching team has managed to integrate the numerous new players into the team, which has been well-rehearsed and functioning for weeks.

Kenny Prince Redondo stands out. For a long time, there was a big gap between the 27-year-old’s performance and reality. But as a goal scorer in the derby in Saarbrücken and as one of the best Lauter players against the SVWW, the offensive player was convincing for the second time in a row. If Redondo, who is sure of the ball and quick to the end, can put in this performance consistently on the pitch, he will be a real asset. The consistency that he lacked last season is required here.

Hippe, Schad and Spahic are also there straight away

Also starting debutant Maximilian Hippe in the centre of defence, Dominik Schad, who was always set before his fibula fracture last season, and former regular keeper Avdo Spahic – all played their part in Saturday’s seventh win of the season. “We kept telling ourselves all week that as long as we get 11 people on the pitch, we believe in ourselves. You saw again that everyone went to their pain threshold and beyond. Everyone in the dressing room has the right to play,” emphasised Marlon Ritter, who scored the winning goal.

In the meantime, the traditional club has climbed to fourth place, and the bad start to the season seems to have been forgotten. But the Betzenberg is not satisfied with that. Anyone who listens to Ritter’s words knows where the journey is heading: “We now have to make sure that we continue to make up ground as quickly as possible, that is our goal week after week.