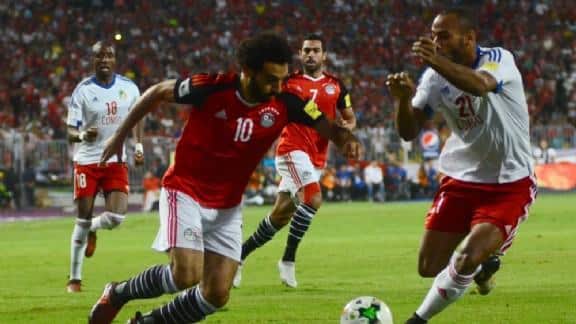 Egypt has managed to qualify itself for a World Cup for the first time since 1990 on Sunday evening.The Pharaohs were 2-1 too strong for DR Congo, although they still had some feet in the earth.A decisive penalty kick by Mohamed Salah detonated the North African country deep in the injury period.

The same Salah had already put his country on the lead after an hour of playing.Liverpool’s attacker picked a long ball after the leather was picked up by an opponent outside the sixteen, put a dribble on it and finally scaled out Barel Mouko with a point.Egypt knew that if it were to win another round of play, it would secure group winnings, and the only ticket for the World Cup in a pool with further Uganda and Ghana, and was on roses for a long time.

How do you get a whole country crazy?Mohamed Salah does it for a moment, if he is allowed to lay in the 95th minute for the penalty kick that Egypt brings to the World Cup 2018!

Three minutes before the expiration of regular playing time, however, it seemed to go completely wrong for the home team: an entrant Arnold Bouka Moutou was overlooked by the defense and smashed the uniformer behind Essam El Hadary.The Egyptians therefore seemed to have had to wait almost a month for clarity, but they were given a windfall after a Congolese violation deep into the injury period.Salah then hit the penalty kick hard and that immediately meant the end of the game.

Do you think Egypt deserved to win?

Share
Facebook
Twitter
Pinterest
WhatsApp
Previous articleArsenal must aim for a place in the top four and needs them to’ target’.
Next articleAs long as Van Dijk plays well, these kinds of things are quickly forgiven to him.