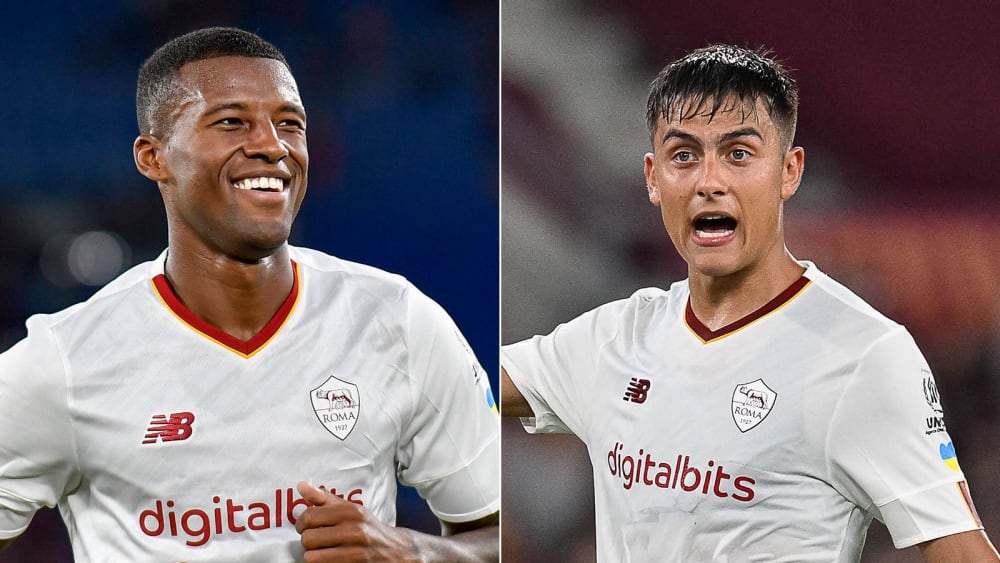 AS Roma have won the Conference League in their first year under José Mourinho. The first title in 14 years and also the first international success in 61 years, coupled with the top-class new arrivals, has the Romanisti dreaming. A quick look at the Giallorossi before the start of the new 2022/23 Serie A season.

First international title win in 61 years and big-name new signings: Roma has been in a real mood of optimism since José Mourinho took over, and this summer the new arrivals have given it another powerful boost. The reception of Paulo Dybala made clear just how great the euphoria is in the capital: tens of thousands of tifosi gathered in front of the palace of Italian civilisation to celebrate their number 21 and provide impressive images.

“Roma is world famous and I knew it before I came to Italy – because of the players who played here,” said the Argentine, who they trust at the club to follow in the footsteps of great players – as evidenced by the offer of the jersey number ten, which belonged to “Il Capitano” and club legend Francecso Totti for years. As a top performer, the 28-year-old is expected to lead the development and return to an absolute top Serie A team that has already begun: As the player himself noted, the club has “grown a lot” in recent years, with the work paying off by winning the Conference League title. “There are many more goals ahead and hopefully we can achieve them together,” Dybala explained.

What can the squad do?

The Giallorossi acted cleverly in the transfer market. While numerous players like Jordan Veretout (Olympique Marseille) recently left the club for a transfer fee (around 40 million in total), the Romans hardly spent any money: in addition to Dybala, Nemanja Matic and Mile Svilar also joined the club on a free transfer. In addition, the club put another exclamation mark on the transfer market with the loan of Georginio Wijnaldum. Only for Mehmet Zeki Celik did they transfer around seven million euros to Lille. Despite the transfer profit, the quality of the team has increased.

The attack is one of the best in the league. In addition to Tammy Abraham, who already scored 17 goals in the league last season and won the hearts of the fans in all competitions as a strong target player as well as a goal-scorer, and Nicolo Zaniolo, who will probably stay in the capital despite offers, Dybala is now also whirling. The newcomer replaces the ex-Dortmund player Henrikh Mikitaryan, although the Argentine is rated more highly than the Armenian. The 1.77 tall attacking player has already proven his scoring prowess in the Italian top flight: he scored 98 times in 271 Serie A appearances for Palermo and Juventus.

But the trio could become a quartet – Roma is working on signing another big name: Andrea Belotti, who scored 113 Serie A goals, is said to have already been on the phone with “The Special One”, according to Italian media reports. Despite the huge competition, the Portuguese is said to have promised playing time to the Italian international striker, who is free on loan.

The squad is also stronger in midfield compared to last season. One of the two newcomers Matic or Wijnaldum could form the centre with leader Lorenzo Pellegrini. The Dutchman in particular is expected to play a key role. Although last year did not go as well as hoped at PSG (he was not a regular), he was one of Liverpool’s mainstays before that and played a major role in their successes – the 2019 Champions League semi-final second leg against FC Barcelona will certainly be remembered, when he sent Anfield into a state of ectasy with two goals within two minutes. Since the Italian European champion Bryan Cristante stayed and only Veretout had to make way, the necessary width is also given in the centre.

The quantity, as well as the quality up front, is lacking in the defensive centre: Gianluca Mancini and Roger Ibanez revealed weaknesses in the past season, but are nonetheless known strengths together with the established Chris Smalling. Nevertheless, Mourinho is probably still trying to lure new defenders to Serie A from his ex-club Manchester United. The Romans are interested in both Eric Bailly and Victor Lindelöf. Furthermore, ex-Dortmund defender Dan-Axel-Zagadou is also an option.

What is the target?

The club from the “Eternal City” is aiming for the Champions League first. Accordingly, the Romans want to finish in the top four in Serie A – which seems possible given the loss of quality in Napoli’s squad. If the Giallorossi do not make it through the league, there is still the Europa League. There, AS is certainly one of the best teams with the squad and can expect something – what it takes to win an international title, the Romans know from the preseason, as we know.

What does the coach say?

Mourinho, who was introduced last year with high expectations, led Roma to their first title win in 14 years in his debut year. In the run-up to this season, which will also be challenging due to the upcoming Winter World Cup in Qatar, “Mou” is keeping his cards close to his chest and will speak about the upcoming season for the first time on the eve of the opening match at US Salernitana.