HomeUEFANdicka suspended: What speaks for Hasebe - and what against
UEFAUEFA Europa League

Ndicka suspended: What speaks for Hasebe – and what against 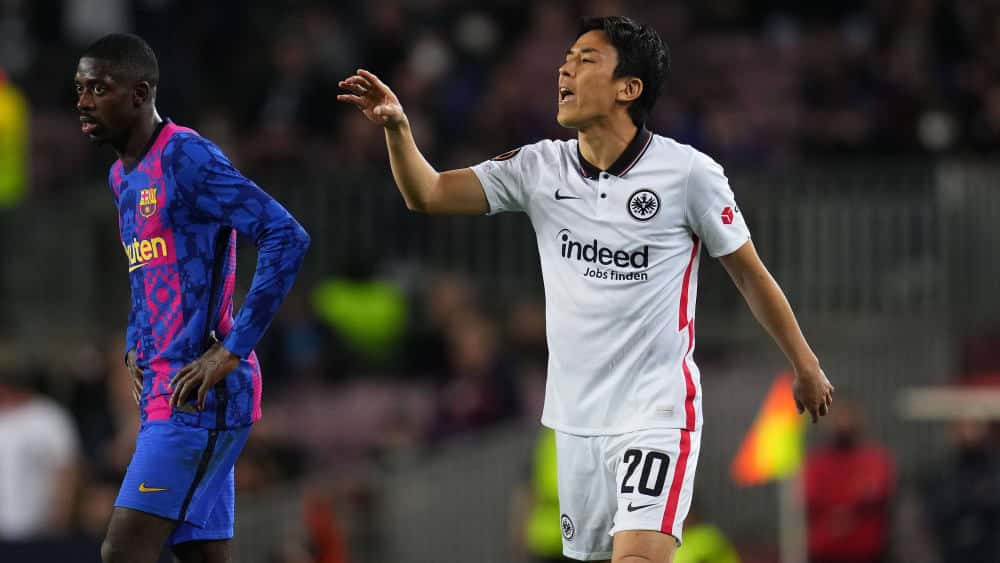 “The anticipation is growing by the minute,” says Frankfurt centre-back Tuta, who was absent from the Barcelona coup due to a yellow-red suspension. Against West Ham, the three-man defence will have to be rebuilt again.


For the most part, the eleven will line up on their own in the semi-final first leg at London’s Olympic Stadium on Thursday night. Djibril Sow has recovered from his knee strain and will start, with Sebastian Rode likely to start alongside him as Kristijan Jakic misses out through yellow card suspension. No changes are expected on the wings (Kostic, Knauff) and in the attack (Lindström, Kamada, Borré), but the line-up of the three-man defence promises to be exciting.

Left centre-back Evan Ndicka will have to be replaced after his yellow card in Barcelona, which presents coach Oliver Glasner with a tricky decision. Two variants in particular are conceivable: Glasner could order Makoto Hasebe into the centre and give left-footed Martin Hinteregger the position on the left in the three-man backline. This is how Eintracht have often played in recent years.


The fact that Hasebe hasn’t been used much lately and West Ham’s centre-forward Michail Antonio is a gritty type speaks against this – such intense duels are tailor-made for Hinteregger. Therefore, there is more to be said for Almamy Toure being given preference and replacing Ndicka in the same position.

The disadvantage would be that Toure is right-footed and could be unfamiliar with the position on the left in the three-man backline. Nevertheless, this choice would be understandable, as it would entail the fewest changes. Moreover, Toure’s strong performance in Barcelona, where he confidently deputised for the suspended Tuta, was a bid for further call-ups.

West Ham should be much more difficult than Barcelona

The Eintracht expects a completely different game in East London than against Real Betis or Barcelona. Against these possession teams, the Hessians were able to play to their strengths and become dangerous mainly through their aggressive pressing and fast switching play. West Ham will now probably offer far fewer spaces, and there can be no talk of physical superiority now either. “It will be an intense attritional battle, we will be challenged to the highest degree,” says Tuta. The Brazilian rates West Ham as a compact and counter-attacking team. Such opponents are not usually to Eintracht’s taste, so many expect an even greater challenge than against Barcelona, even though the Catalans are stronger individually.

The confidence is nevertheless unbroken. “We know that we are up against a great opponent who will give us two very hot duels. But the spirit and positive energy we have built up throughout the Europa League campaign can be felt in every pore,” Tuta exulted.

Tuta sees the fact that he is now allowed to play the semi-final after his suspension at Camp Nou as a “gift” from his teammates. Now he, in turn, can give something back and play his part in ensuring that Eintracht will also be on the pitch at the final in Seville on 18 May – and the day after at Frankfurt’s Römer.