Nadal’s participation in French Open questionable after retirement in Rome 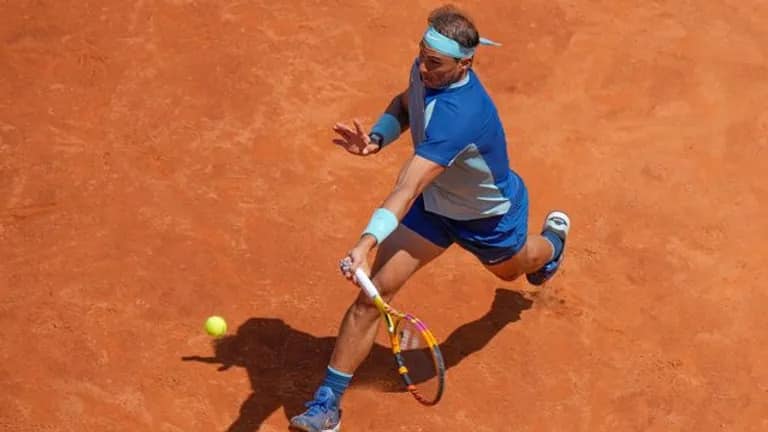 Rome – Rafael Nadal was visibly marked. At the end of his round of 16 match against Canadian Denis Shapovalov, the Spanish tennis legend was limping around the centre court in Rome.


At one point, it even looked as if Nadal would have to retire, so severe was the pain in his foot. With his head buried in his hands, the 35-year-old sat on his chair, looking like a pile of misery, Nadal, who has already won the Masters 1000 tournament at the Foro Italico ten times. And about a week before the start of the French Open, the question inevitably arises: how fit is the record Grand Slam champion for his favourite tournament?

“I’m not injured, I’m a player who lives with injury,” Nadal said as he sat in the press conference just minutes after his exit. For a long time now, the Spaniard has been struggling with problems in his foot, the so-called Müller-Weiss syndrome has been giving him a hard time. “Sometimes I don’t notice anything, sometimes the pain is crazy,” Nadal said, “like today.”

Because of the injury, the long-time world number one had already had to miss almost the entire second part of the season since the French Open last year. His comeback at the beginning of the year was all the more impressive when he won his 21st Grand Slam title at the Australian Open – more than anyone else.

In Paris, title number 22 should now actually follow from 22 May. At Roland Garros, his tennis living room. But is that realistic in view of the pictures from Rome? “I can’t say anything about that,” Nadal said. “Unfortunately, my day-to-day situation is very complicated,” he described, “and that is sometimes difficult for me to accept.”

Where do we go from here? It was a question Nadal could not answer after the bitter exit in Rome. “What will be in the next few days? I don’t know. What in a week? I really can’t say,” a frustrated Nadal replied.

Normally, the tennis weeks in April and May are feast days for Nadal. Monte Carlo, Barcelona, Madrid, Rome – at these tournaments Nadal collected titles in a row in the past. This time he goes into the French Open without a tournament win on clay. And with a lot of question marks. But that doesn’t have to be a bad omen. Nadal also experienced a complicated clay-court season in 2020 – and still triumphed at Roland Garros.