Marsch after Nkunku’s departure from training: “We have spoken” 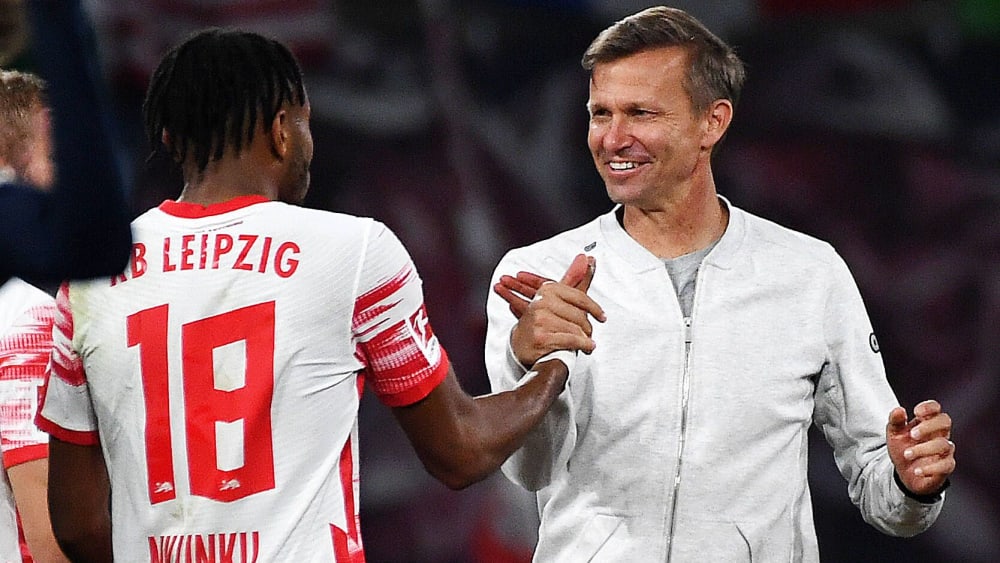 Jesse Marsch gallantly moderated Christopher Nkunku’s departure from training. Ahead of the away game at SC Freiburg, he not only clarified the background, but also spoke about his expectations and the personnel.

Marsch’s personnel update ahead of Saturday’s away game in Freiburg was long and mixed. The RB coach will have to do without Marcel Halstenberg for longer than planned. The international underwent a minor procedure on his knee this Thursday. “It will probably take two weeks before he is back on the pitch and can train individually,” reported Marsch.

On the other hand, there was a “good signal” from Dani Olmo, who trained on the pitch for the first time again after tearing a muscle fibre. “He is more and more aggressive,” Marsch explained. Maybe he can even make a short appearance in Freiburg, or then next Tuesday in the Champions League match in Paris.

Ready for Saturday are Nordi Mukiele and Kevin Kampl. Mukiele had to stop training on Wednesday because of a stretch in his right ankle. Kampl trained separately from the team due to a cold so as not to infect anyone, but will be fit in time.

And Christopher Nkunku? The 23-year-old Frenchman had simply stepped off towards the end of Wednesday’s training session. Marsch clarified: “He was angry that his team lost and he also slightly injured his ankle in the last action after a blow.” In the meantime, he said, everything had been cleared up: “We spoke, it was just a bit of dissatisfaction. He’s ready for Saturday – that’s the most important thing,” Marsch played down the departure, only to immediately praise Nkunku in the highest terms: “He’s so important for us right now. He feels fully confident in the group now and is a very important part.” Five goals in the past three competitive matches underline that.

Nkunku fired Leipzig to emphatic victories over Bochum (3-0) and Hertha (6-0) before the international break, RB gaining ground in the table as a result. “We have momentum in the league right now,” said Marsch, classifying the Freiburg game accordingly as “so important”, even as “one of the most important games in the first half of the season”.

What he expects now: consistency. And: “We have to play to our strengths more and more, i.e. work intensively against the ball, build up a lot of pressure in the opponent’s half, and have more actions forward in possession and less deep in front of our goal. “

“Sorry our press conferences are not that interesting. “

Marsch’s respect for Sport-Club – including a premiere in the new Europa Park stadium – is “very great”. Freiburg play with a certain naturalness and are always dangerous when it comes to standards. He also raved about Christian Streich. He is not only a “super coach”, no, Marsch “also likes his press conferences”. With a broad grin, he added: “Sorry that our press conferences aren’t that interesting. “