Interim boss Beierlorzer “doesn’t have to change the match plan” 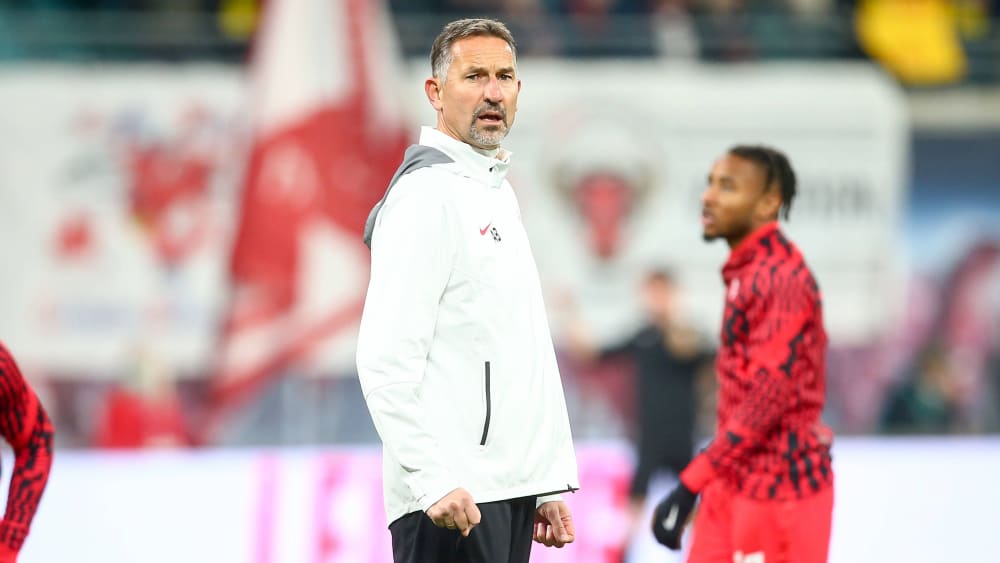 Achim Beierlorzer faces a tricky mission: Without head coach Jesse Marsch, who tested positive for Corona and regular keeper Peter Gulacsi, the co-coach will take RB Leipzig to Bruges for the winter in Europe – a win is needed for that.

The most important news was announced by Achim Beierlorzer right at the beginning of the press conference. Coach Jesse Marsch and captain Peter Gulacsi, who both tested positive for the corona virus on Tuesday, are “fine under the circumstances. They have mild symptoms, that’s all, “ said Leipzig’s co-coach before departing for Bruges, where he will have to deputise for his boss in the winter final on Wednesday. Marsch was still virtually connected to the team meeting on Tuesday from quarantine, and a close exchange is also planned between the boss, who has stayed at home, and his deputy on match day. Since the second co-coach Marco Kurth was also separated from the team despite a negative test result due to an infected contact in his private environment, head analyst Fabian Friedrich and long-time goalkeeper coach Frederik Gößling will take over the assistant job on the bench.

All those involved have been vaccinated

Because the entire RB squad, including the support staff, has been vaccinated, no other members of that circle will have to be quarantined as long as they show no symptoms. Gulacsi is to be replaced by 23-year-old Josep Martinez. The Spaniard, who trained at FC Barcelona, was brought to Leipzig from UD Las Palmas for €2.5 million in the summer of 2020, but he has not been able to shake the throne of the overpowering Gulacsi. He has made two appearances for RB so far. In the last Bundesliga season, his competitive debut ended with a 1-2 defeat at Union Berlin, and a month ago he was not challenged in the DFB Cup match at regional league side SV Babelsberg (1-0).

That should change on Wednesday in front of around 30000 spectators against Club Brugge. “We have a really great boy in Josep, who has an incredible amount of quality. I am convinced that he will represent Pete well,” said Beierlorzer. He also said the Spaniard’s footballing ability was “so good that we don’t need to change the match plan. “

After the 0:2 in Hoffenheim under pressure to make amends

The boss role is nothing new for the Franconian, he already held it in Leipzig. After the dismissal of Alexander Zorniger in February 2015, he was promoted by Ralf Rangnick to the interim position, and after the club failed to gain promotion to the Bundesliga, the sporting director also took over as coach four months later. Beierlorzer later became head coach in Regensburg, Cologne and Mainz, returning to Leipzig five months ago.

His mission on Wednesday is a delicate one. After Saturday’s disgraceful 0:2 performance at Hoffenheim, Leipzig is under enormous pressure to make amends. “We had a very good meeting after the Hoffenheim game, we talked quite honestly with each other there. We know what we didn’t do well and have to do better,” Emil Forsberg reported and demanded specifically: “Our physical performance was not good, we have to do much better. “